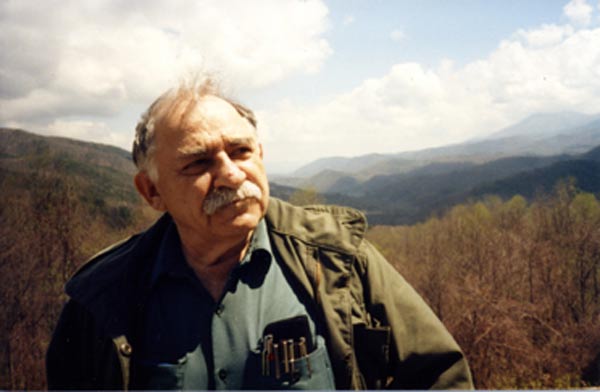 A pioneering political thinker who connected anarchism, anti-capitalism and ecology, the late Murray Bookchin’s influential works – including over 20 books – spanned from the 1950s through to the 1990s, and have since re-emerged as central to the ideology of the Kurdish liberation movement.

Small worked with Bookchin on developing political ideas in the 1990s while studying for his masters at the Institute of Social Ecology in Vermont, at which time, Small said, Bookchin was a “formidable political figure”.

“Bookchin argues you can’t really have a ‘green capitalism’, and he argues that the environmental movement has been too soft and liberal.” Mike Small

After Bookchin’s influence all but disappeared from view for some time, Small was surprised to see him cropping up in the Kurdish situation, although his ideas, Small said, are increasingly relevant.

Speaking to CommonSpace, Small said: “I’m delighted to be working with Scottish Solidarity with Kurdistan and Common Weal Dundee to explore the ideas of Bookchin, decentralised democracy and social ecology.

“With the crises we face these ideas are more vital than ever before.

“Murray Bookchin was a theorist of the anti-globalisation movement before its time, an ecological visionary, an advocate of direct action and a polemicist.”

At the event, Small will contextualise Bookchin’s ideas within his wider critique of capitalism, which he described as “the disease of society”, and of the environmental movement, which he regarded as failing to address the social aspects of the ecological crisis.

“Bookchin argues you can’t really have a ‘green capitalism’, and he argues that the environmental movement has been too soft and liberal,” Small explained.

“For Bookchin there was a clear distinction between ecology, which wanted to transform society, and environmentalism, which wants to ameliorate the worst aspects of capitalist economy.

“He also critiques the ‘deep green’ movement, which overlooks and undermines the role of humans.”

At its core, Small said, Bookchin’s theory of social ecology was about the belief that “you can’t have environmental justice without social justice”.

In one of Bookchin’s groundbreaking works, The Ecology of Freedom (1982), he wrote: “The domination of nature by man stems from the very real domination of human by human.”

Bookchin argued that the ecological crises could only be sold through “a new politics based on face-to-face democracy, neighbourhood assemblies and ‘the dissolution of hierarchy’”.

This vision for a new kind of politics inspired the now imprisoned Kurdistan Workers’ Party (PKK) leader Abdullah Öcalan, whose political thought has gone on to form the basis of a new society in Rojava, Syria.

“How we do democracy is not something we discuss. We talk about the outcome, but now about how we get there.” Sarah Glynn, Scottish Solidarity with Kurdistan

Following a struggle with Isis, the Kurdish people succeeded in gaining control of the region, where they have now adopted what is described as “democratic confederalism”, which is a form of grassroots democracy delivered through local assemblies and direct democracy.

Sarah Glynn, committee member of Scottish Solidarity with Kurdistan will introduce the event on Wednesday, highlighting the influence of Bookchin’s ideas in Rojava.

Speaking to CommonSpace, Glynn explained that she had been interested in the Kurdish movement precisely because of the developments in Rojava, “which is a beacon of hope in an otherwise desolate area in a desolate world”.

These radical ideas, Glynn suggested, have the potential to inform new ways of working and thinking here in Scotland too. “How we do democracy is not something we discuss,” she said.

“We talk about the outcome, but now about we how get there – and how we get there is very important.”