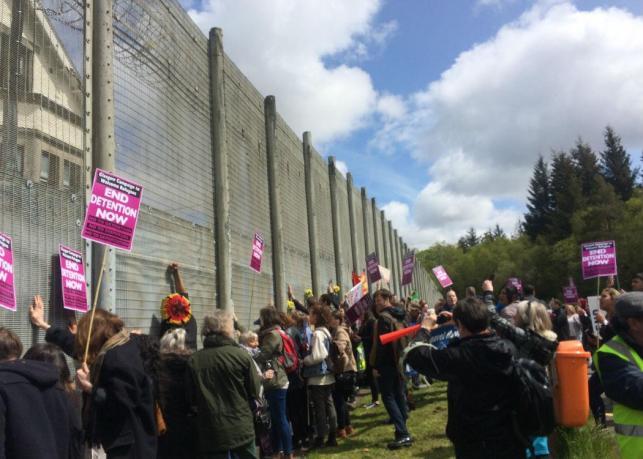 Rooftop protest by detainees over conditions at Dungavel on 13 July

A DETAINEE at the notorious Dungavel Immigration Removal Centre has ended a hunger strike embarked upon last week in protest at his treatment by the Home Office, but continues to demand that he be released ahead of his upcoming appeal so he can be with his family, outlining to CommonSpace horrendous conditions in the facility which led to a rooftop protest on Friday [13 July].

Adel Aboulkacem, originally from Tunisia, has been living in the UK for 15 years. Both his partner and their two children were born in the UK. At the outset of his hunger strike, which begun on 13 July, Aboulkacem requested that he be released in order to prepare for his next court date, as well as calling for urgent medical care and better treatment for those detained at Dungavel.

Speaking to CommonSpace today [16 July] via phone, Aboulkacem confirmed that he had ended his hunger strike, saying “it is not good for your case to carry on like that.” He also confirmed that conditions in Dungavel had prompted a rooftop protest by detainees on 13 July.

Speaking with his friends via Glasgow’s Unity Centre, a support service for all those in UK detention centres, Aboulkacem said last week: “I want to be released please, so I can be with my family and lawyer before my appeal.

“I need to bring my partner and kids together to go to this appeal. They told me to bring my family to the appeal but how I can do that when I’m inside?

“I’m trying to support my family from inside by working, I want to look after my kids, I want they to have a good life. They are struggling to pay bills and clothes without me there. My daughter and son need new shoes and I’m stuck here.

“What can I do? They are killing me here. They are keeping people for a long time here, for no reason. Any other country in Europe, it’s three months. Here it could be weeks, months, years.” Dungavel detainee Adel Aboulkacem

“What can I do? They are killing me here. They are keeping people for a long time here, for no reason. Any other country in Europe, it’s three months. Here it could be weeks, months, years. I know one man here who is four years in detention, it is ridiculous, he has two kids.

“Being in detention, they try and make you calm down but it’s impossible; it’s not right. They won’t let us on the internet, or to read the newspaper. They are pushing you to do something bad to yourself. To kill yourself or harm yourself. There is lots of fighting and drugs.”

Prior to being incarcerated in Dungavel, Aboulkacem was found guilty of theft, but has stated that he regrets the choice that he made, attributing it to desperate circumstances and the pressure he felt to provide for his family, despite never having committed a crime before.

Aboulkacem appealed to the public to support his requests to the Home Office and to raise awareness of his case, as well as those like him: “Please if people can support me or protest I would support it, because everyday something happens here and its driving everyone mental.

“Someone got on top of the building today, and tried to jump, he said ‘you want to kill me’. They have been taking people by force, people have lost their lives here.

“They have been here so long, for making one mistake. Everyone has one mistake in their lives, but my mistake is costing me my life. I had a seven week prison sentence, and I’ve been eight months in detention. I’ve done more detention than prison! I dont know what it looks like outside anymore.”

Although Aboulkacem successfully fundraised £400 for his bail, he remains in detention after the Home Office denied him bail, arguing that the £400 was insufficient. Additionally, despite reportedly suffering from medical problems, Aboulkacem claims that he has been told he needs to wait up to 27 weeks to receive medical treatment while detained.

Speaking to CommonSpace after the end of his hunger strike, Aboulkacem addressed the Home Office directly: “I want you to give me bail to release me. I have an appeal in 23 hours – I want to bring my kids with me, because they have to see my kids.”

The Home Office had not responded to CommonSpace’s request for comment at the time of publication.

The conditions within Dungavel have been a consistent cause of controversy and have spurred numerous campaigns calling for its closure and to deliver justice for those imprisoned within.

In 2015, up to 70 detainees – most of them asylum seekers – also took part in a hunger strike against conditions within the detention centre, demanding a time limit by imposed on how long people can be detained.

Speaking at the time, SNP MSP Sandra White said: “That people are resorting to these desperate measures is a damning indictment of some of the absolutely shameful practices employed at Dungavel – and shows exactly why we need a new direction when it comes to asylum and immigration policy.

“This episode is a depressing reminder that Westminster has too often shown scant regard for the rights of people detained at Dungavel – so it should come as no surprise that some of these people feel they have no other option but to resort to measures like this.

“The UK is the only country in the EU which has no cap on how long people can be detained under immigration powers.

“It is time for a new approach which prioritises compassion and fairness over punishment and isolation – helping those who seek asylum to more easily integrate into our communities and allowing our national life to benefit from their skills and their culture.”