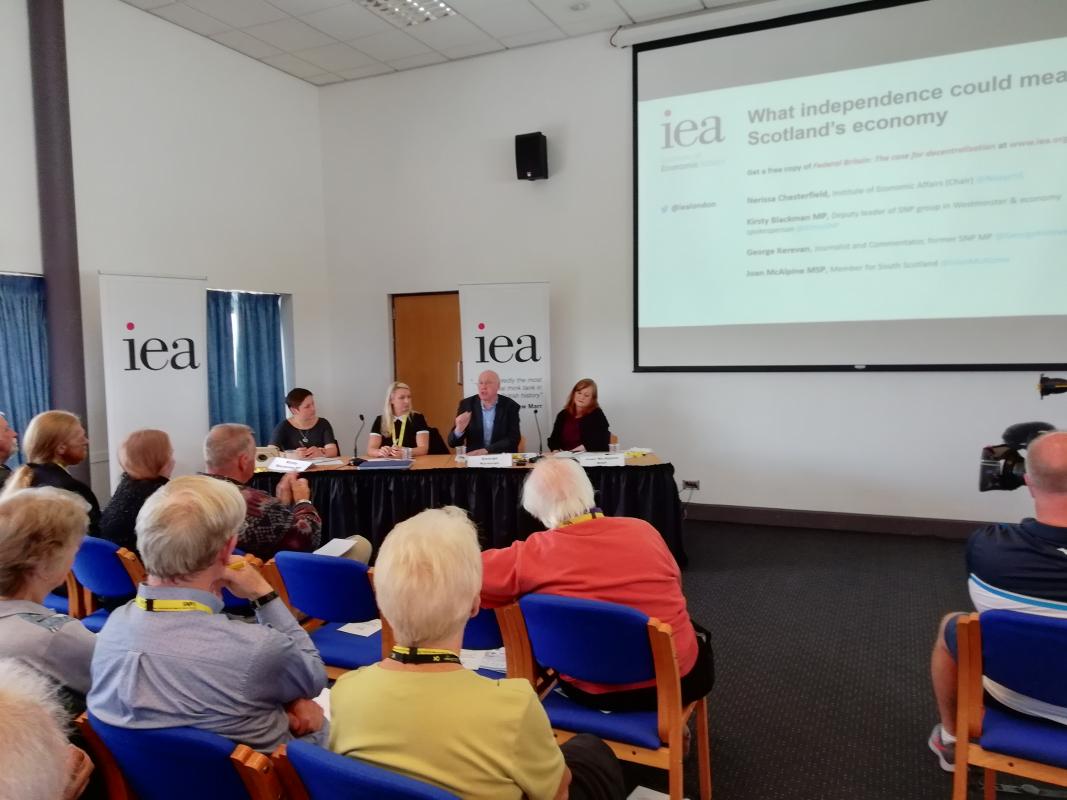 FORMER SNP MP and economist George Kerevan told an SNP fringe meeting that “if we don’t have our own currency we are at the mercy of the banks”, during a debate on independence and the Scottish economy.

The fringe at SNP’s spring conference in Aberdeen was hosted by the Institute of Economics Affairs, a radical free-market think-tank, and heard from SNP MP Economy spokesperson Kirsty Blackman, Joan McAlpine MSP and Kerevan, who said he welcomed the Sustainable Growth Commission report but went on to outline substantial disagreements with it.

The Growth Commission, chaired by corporate lobbyist and former SNP MP Andrew Wilson, was published on 25 May, and has led to a wide ranging debate about its contents, which include proposals for fiscal consolidation, use of pound sterling outside a currency union with the Bank of England and ‘come to Scotland’ tax relief policy for businesses.

Kerevan said that the report was “too conservative”, and he received loud cheers when he stated that it was because the banks control the UK economy that we have had “poor growth and poor productivity”.

“If independence isn’t about changing that then what is it for?” he added, to applause.

Neither Blackman nor McAlpine broached the issue of the Growth Commission’s currency proposals directly, but McAlpine said that although the currency issue was important, showing how Scotland would have different priorities on the Scottish economy from Westminster would be the decisive factor.

She said it was a mistake during the last referendum to argue for corporation tax cuts, praising the Growth Commission for not advocating that policy.

Kerevan said the Growth Commission’s approach – of arguing in principle against corporation tax cuts but proposing to tie the rate to that of the rest of UK – was a mistake, as the example of differential business rates in US federal states and higher corporation tax in Germany show it was not necessary.

Blackman advocated tackling corporate greed through looking at employee share ownership of companies, arguing that UK businesses “are set up for increasing profit share, not productivity”.

The right-wing IEA came under criticism from the audience, with one audience member asking how we can tackle the problem of politicians who aren’t necessarily experts on the economy being flooded with economic information by think-tanks who “represent the one per cent”. Another questioner asked why the IEA claimed scrapping scotch whisky’s IP protections post-Brexit would be good for Scotland’s economy, to which she did not receive an answer.

Kerevan has criticised the Growth Commission in his column in The National, saying that it would be a big mistake if its policy of maintaining the UK’s bank regulation rules was supported by the SNP.

“To comfort the City, Wilson proposes that an independent Scotland adopt wholesale the current UK bank supervision rules. These are the much watered-down – useless – version of regulations against which I and other SNP MPs fought tooth and nail for two years at Westminster,” he said.