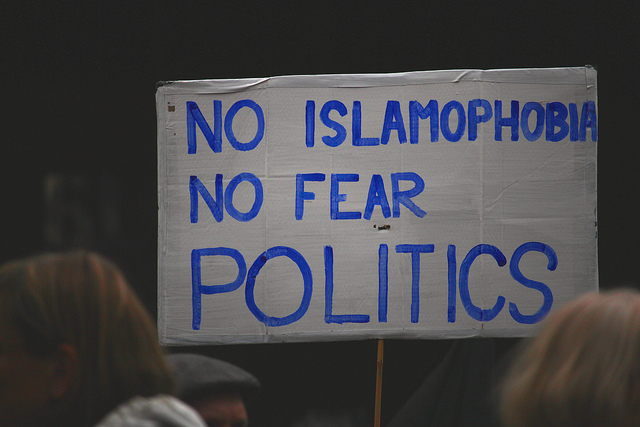 A DEMONSTRATION against the notorious ‘Punish a Muslim’ hate campaign will be held in Edinburgh on Tuesday evening, echoing similar anti-racist events taking place across the UK.

The protest, convened as part of ‘Stand Up To Islamophobia Day’, has been organised by the campaign group Stand Up to Racism Edinburgh, and will be held at the Mound at 5.30pm.

The protest, alongside similar actions planned for Tuesday, was spurred by a letter which began circulating in March, which designated 3 of April as ‘Punish a Muslim Day’ and detailed a points-based reward system for various acts of violence and hatred perpetrated against Muslims, with 1000 points awarded to those who “burn or bomb a mosque”.

People have also been encouraged to participate in ‘Love a Muslim Day’, being held on 3 April by the Muslim Women’s Association (MWA).

“The perpetrator of the hate letter is inciting hatred and violence and this act must be prosecuted as a hate crime.” Muslim Women’s Association spokesperson

A MWA spokesperson said: “We are asking supporters to post positive messages to Muslims on social media throughout the day on Tuesday April 3.

“The perpetrator of the hate letter is inciting hatred and violence and this act must be prosecuted as a hate crime.

“Sending poison pen letters has always been a very serious crime precisely because of the distress it causes, and the fact that the author is anonymous is disgusting cowardice.

“To counter the negative and distressing effect on Muslim friends in England receiving the hate letter we are focusing on bringing our communities together on April 3 by inviting everyone to combat Islamophobia online using hashtags #NoToIslamophobia #RageAgainstRacism.

“We call on our political representatives to support anti-racist campaigns and make sure 2018 is the year we stamp out such bigotry.”

According to the Daily Record newspaper, Muhammad Adrees, convener of the Muslim Council of Scotland, has claimed that the letters have already led to Islamophobic incidents.

Adrees said: “The letters are a chilling reminder of the very real danger and hatred facing ordinary Muslims every day.

“Although there are no known recipients in Scotland, they have nonetheless caused considerable alarm and the community needs reassurance.” Muslim Council of Scotland convener Muhammad Adrees

“Although there are no known recipients in Scotland, they have nonetheless caused considerable alarm and the community needs reassurance, especially since the letters have already triggered Islamophobic incidents here.”

Speaking in the Scottish Parliament last week, Labour MSP Anas Sarwar said he was aware of five incidents in Glasgow which may have been motivated by the letters.

Responding to Sarwar’s raising of the subject at First Minister’s Questions, during which he read details of the letter to the parliamentary chamber, First Minister Nicola Sturgeon said: “It’s sickening, it’s appalling, it’s disgusting, it’s deeply disturbing – it’s all of that and more.

“But I feel that none of that really does it justice. It certainly doesn’t do justice to what I feel, and I know all of us feel, about that.

“I have, as many of us do, many friends and constituents in the Muslim community. So I know, and I see first-hand the impact that this kind of prejudice, hate, discrimination has on them, and I feel so deeply for every single one of them.

In anticipation of possible anti-Muslim violence on 3 April, Iman Atta, director of Tell Mama, an NGO which monitors anti-Muslim activities, told the Evening Standard newspaper: “Given the fear in Muslim communities we’ve been working to see how communities can support each other on the day, should anything happen.

“We’ve put security bulletins with safety tips out through police forces but also through our own database.

“The advice is to continue with your daily activities and don’t stay indoors as some messages circulated on WhatsApp have told people, but to be alert and vigilant and if you see anything suspicious, report it to police and Tell Mama.”

Response to the hate campaign reached an international level, with police patrols being increased at New York mosques and Islamic centres in response to the letter’s viral circulation online.