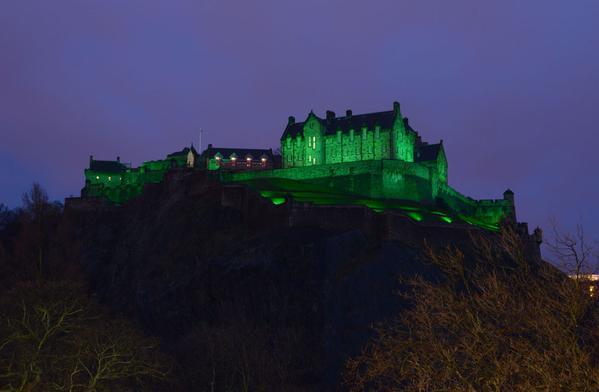 The announcement was made by Culture Minister Fiona Hyslop MSP in Dublin during ongoing visits to strengthen Irish-Scottish relations.

The news was welcomed by the Irish Heritage Foundation Scotland, which said in a statement: “This is great news for the Consulate, the Embassy in London, Tourism Ireland, and for all of us who work to strengthen and deepen the bonds of friendship between Ireland and Scotland.”

International capitals including Paris, Rome and London will also see their landmarks turn green. In Glasgow, the Clyde Auditorium and the SSE Hydro will turn green as part of the celebrations. The parliament buildings in Belfast will not take part.

Hyslop added: “Turning one of Scotland’s most iconic buildings green for St Patrick’s Day is a fitting way to show the importance we place on our relationship with Ireland, and a celebration of the friendship which exists between our two nations.”

Charlie Flanagan, the Irish Minister for Foreign Affairs and Trade, visited Edinburgh a fortnight ago to discuss a ‘new chapter’ of cooperation.

He stated: “I very much appreciate this generous gesture from the Scottish Government. The addition of such a landmark to the already impressive list of iconic locations going green on St Patrick’s Day is another important moment in the friendship between Ireland and Scotland and literally highlights our ever-strengthening links.”

There have been four Scottish Government visits to Ireland since the beginning of 2015.