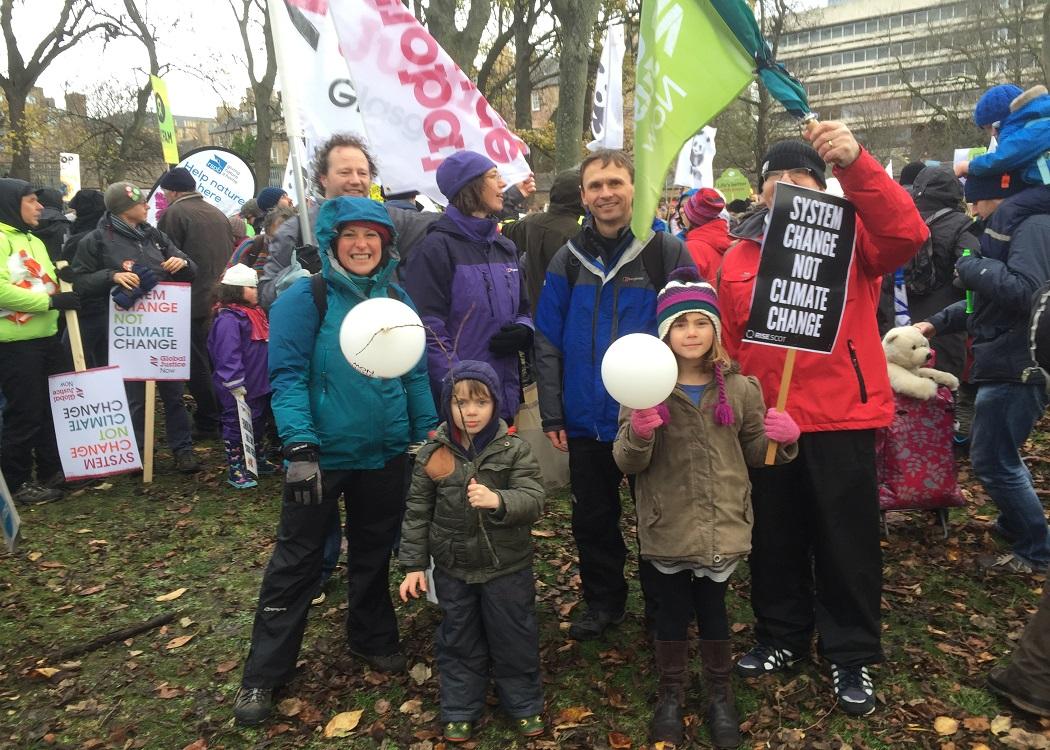 AS the UN climate change summit in Paris kicks off, campaigners in Scotland are hopeful that they can help add pressure on governments to take more action on the environment.

We spoke to a number of marchers at the Stop Climate Chaos Scotland march in Edinburgh on Saturday and asked them how they thought their actions may be able to influence policy makers ahead of the summit.

This march will show that there are a lot of people who care about the environment. It is not just a borderline issue, but it will be at the front of what that they will be talking about.

This conference will be important in that they should not be looking for the lowest common denominator answer, but looking for something important and a step forward.

For me, I study international relations and I spend a lot of time listening and looking at how politicians constantly place national interest above the interest of humanity, and not taking the political cost seriously in the long term and the human cost of not addressing climate change now.

So I am hoping that over the weekend, people will actually put words into action and actually care more about humanity than winning their next election.

Damon, student from University of Edinburgh

If I am honest, I don’t know how much influence it will have on them. I feel that they are already decided on what they are going to do. I am more concerned about influencing the people of Edinburgh to change their lifestyles and get more momentum behind campaigns like this here.

Also, I think that it has some influence as it is happening all over the world. I think that we need many more people behind it to have influence on the policy makers who are meeting in Paris.

One of the reasons why we are out here today is to be part of the worldwide movement trying to influence the Paris negotiations that are happening. We think that it is an amazing opportunity to show that the climate movement is bigger and better than ever and it is really strong.

We are expecting hundreds of thousands of people on the streets in major cities around the world. This is one small march part of the global movement. So we are hoping that it will put last minute pressure on world leaders as they meet in Paris, but at the same time, we know that it is unlikely that whatever is agreed in Paris will encumber what we need to tackle climate change.

It is to show our politicians that, beyond Paris, people do care about climate change because at the end of the day, climate change isn’t going to be solved overnight. It’s about a lot of decisions policy makers and politicians make and knowing at every stage in those decisions that they have public pressure behind them to take real action on climate change.

What we are saying is that it is not really about those negotiations. Obviously we want to do everything we can to get as good a deal as we can get, but we have a lot of work to do in Scotland.

I hope that it has a lot of weight in terms of policy. I think that there is a lot of students that are involved in the campaign for climate change, which is really important as it is the younger generation that are concerned with climate justice.

It is just as important to show climate justice to them and go show government, officials and corporation’s that it is a really serious issue. I really do hope that it has a big impact on the policy.

I hope that it will raise awareness, and through seeing the passion of the people they realise that climate change is really important for our future, to provide jobs, and to provide a sustainable environment for the animals and species that live here.

Currently, if we don’t think about the future in the methods that people will use for energy then it will not be a positive environment for the future for our generations.

The important thing about this march and any ongoing action is to keep them moving over the next year so that we can get the better deal as the years go by.

If there are similar crowds at different capital cities around the world then I think that they should influence them [policy makers]. We should not be put off or feel hopeless. This is just the start and we need to keep at them for the next 15 years.