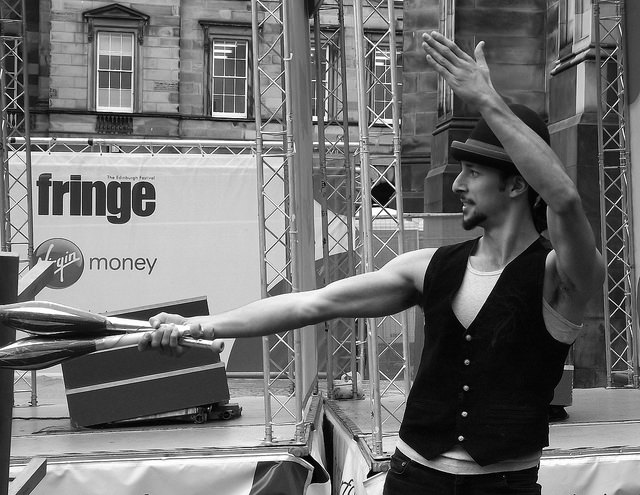 A NEW SET OF GUIDELINES for employers and venues participating in the Edinburgh festival season have been criticised by a representative of the Fair Fringe campaign for its voluntary nature, its lack of detail over how it would be enforced and its commitment to an insufficient Living Wage.

Published following talks between Edinburgh City Council, trade unions and festival event organisers, the Edinburgh Festival Workers’ Welfare Commitment calls for all workers at Edinburgh’s various festivals to be paid a Living Wage of £7.83 per hour, as well as being given guaranteed rest breaks and protection from harassment and discrimination.

Were the guidelines to be followed by all participating venues and businesses, unpaid trial shifts and the practice of tips being used to replace or top up wages would also effectively be banned. The guidelines are reportedly intended to set a “minimum standard” for the treatment of festival workers.

Following the guidelines’ publication, Kirsty Haigh of the Fair Fringe campaign told CommonSpace: “It’s great that the Council have laid out these commitments and are taking steps to ensure that the Fringe is no longer built on the backs of exploited young people.

“However, what we’re still to see is how any of this will be enforced. Creating a voluntary scheme does little to ensure that venues will actually change their practices.”

The new guidelines have reportedly been inspired by the Fair Hospitality Charter drawn upon by the Unite trade union, which last summer launched the Fair Fringe campaign in an effort to curb exploitation of festival workers and bring about better pay and work conditions.

But Edinburgh City Council has yet to set out any sanctions which will be enforced against employers that do not abide by the guidelines, which are purely voluntary. The Scotsman newspaper has reported it understands Edinburgh City Council will be writing to directors of all the main festivals taking place in the capital, urging them to support the proposals.

“We know from trying to engage with Fringe venues that most of them have little or no interest in changing and creating decent working conditions.” Fair Fringe campaigner Kirsty Haigh

“We know from trying to engage with Fringe venues that most of them have little or no interest in changing and creating decent working conditions,” Haigh added.

“We’re also disappointed to see the Council only calling for venues to fulfil the fake Living Wage of £7.83 when we know that what people really need to live off is at the absolute least £8.51 per hour.”

Haigh went on to say that the new Welfare Commitment fell short of what the Fair Fringe campaign had fought for: “We had been asking the council to attach the charter to licensing regulations – that way only companies who agreed to ensure that staff weren’t left out of pocket and out of energy would be given licenses for their venues.

“If companies were then found to be breaching or not fulfilling this agreement then the license would be removed. A policy like this would transform the Festival overnight and force Fringe companies to take workers rights seriously.

“We’ll be continuing our campaign to ensure that every worker in the Fringe has the working conditions they deserve.”

The Fair Fringe campaign was launched in 2017 from a coalition of festival workers, Unite union activists, Better Than Zero campaigners and members of the Scottish Labour Young Socialists, and initially called upon Fringe employers to sign up for a charter committing to £8.45 an hour, an anti-sexual harassment policy, enforcement of rest breaks, 100 per cent tips to staff, and access to trade union membership.

A survey of Fringe workers undertaken in 2017 by Culture Republic found that almost one in three were not paid for their time and efforts. Almost half of those who took part in the survey said they worked more than 49 hours a week during the Fringe, while around a quarter of those workers were paid less than £1,000 over the entire festival period.

In August 2017, First Minister Nicola Sturgeon backed efforts to ensure all festival workers got a better deal on pay and conditions, saying that the Edinburgh Festival should be in the “vanguard” of ensuring its workers are paid a living wage of £8.45 per hour.

Sturgeon said: “My message to venues would be the same as it would to any employer. We live in an age where we want to see people well.”

Sturgeon said that the concerns raised by unions and campaigners were “legitimate issues” and continued: “I don’t speak for any of the festivals, but I know there is an appetite and a willingness to address them.

“As a government, we are champions of the living wage. I think we have to work together to make sure that events like the Edinburgh Festival are in the vanguard of that kind of progress.”

Bryan Simpson, a hospitality organiser for the Unite Scotland union who has also been involved in the Fair Fringe campaign, said following the guidelines’ publication: “For too long now Fringe workers have been thought of by some of the big employers as disposable and not deserving of ‘luxuries’ like the living wage.

“We are pleased that the city council has listened to calls from our members at the Fringe that they deserve fair conditions like every other worker.

“With a living wage, minimum hour contracts and protection from discrimination, thousands of hospitality workers across the capital will benefit.

“For too long now Fringe workers have been thought of by some of the big employers as disposable and not deserving of ‘luxuries’ like the living wage.” Unite Scotland organiser Bryan Simpson

“These changes also send a clear message to private employers who have been caught-out in the past with sub-standard working conditions that they must buck up their ideas when it comes to fair hospitality for their workers.”

Edinburgh City Council chief executive Andrew Kerr described the objective of the guidelines as establishing “a responsible and credible festival worker environment for Edinburgh, while encouraging all festival organisations to work in partnership with trade union colleagues.”

“Our commitment sets out what we as a council expect for festival workers and where we would like others to follow,” Kerr added.

Further efforts to improve working conditions at the Fringe have been undertaken by the BECTU and Equity trade unions. This followed controversy over a job advert posted by Zoo Venues, which runs six regular temporary spaces in Edinburgh during the Fringe, for technicians to work over the entire festival period in exchange for accommodation, travel expenses, some money for food, but no actual wages.

BECTU Scottish organiser Paul McManus described the advert as “outrageous”, saying: “We accept there is a balance to strike – you get groups of friends coming up to put a show on and we don’t have a problem with that. It’s when you have venue operators doing this for the run of the fringe to make a profit.

“It’s absolutely exploitative, a large number of the volunteers are students who are told: ‘We’ll put you up and feed you and look after you, and you’ll work for us and get tons of free time.’ In reality it ends up being work and sleep.”

BECTU has recommended a similar set of guidelines to those of Edinburgh City Council, the Edinburgh Fringe Society’s Living Wage Code of Conduct, but this also asks venues to pay the living wage only where it is possible. BECTU has described the code as “guidance towards best practice, rather than a condition of participation in the fringe”.

Nevertheless, in a possible indication of the resistance which efforts to reform pay and conditions at the Fringe may encounter, both Zoo Venues and the Pleasance Theatre – which offers volunteers accommodation and £680 over the course of the festival – defended their respective schemes.

A spokesman for Zoo Venues argued in The Stage that volunteers are provided with an “invaluable opportunity to learn, train and make good industry contacts”.

Pleasance director Anthony Alderson also proposed that, instead of abolishing volunteer placements, the Fringe should “find exemplary models of working”.

Alderson also argued that it was “too easy to attack the venues”, highlighting the fact that many venues, including the Pleasance, are charities or not-for-profit venues. Alderson went on to encourage Edinburgh residents to charge Fringe workers less for rented accommodation, which is notoriously expensive during the festival season.

However, given the vaunted importance the festivals have to Edinburgh’s economy, such opportunism from both employers and local landlords may be difficult to prevent without tougher measures.