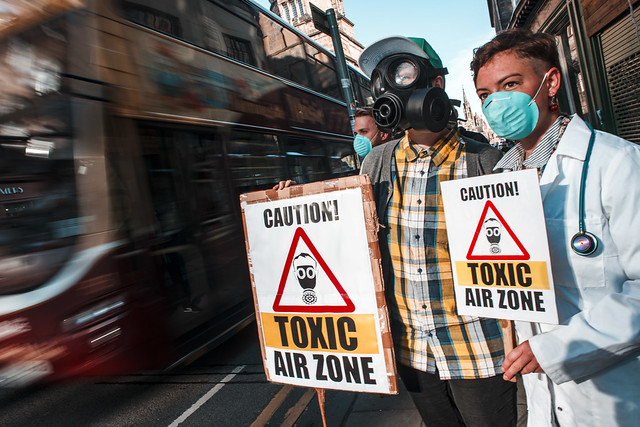 ENVIRONMENTAL campaigners have criticised the Low Emission Zone plans from City of Edinburgh Council, arguing that they could increase environmental inequalities in the city as the city centre is prioritised for air pollution reduction over the rest of the city.

The proposals are currently undergoing a public consultation which draws to a close this Sunday [21st July], with 2,000 responses submitted so far.

City of Edinburgh Council’s draft Low Emission Zone proposes two-tiers, with an Old Town boundary which will restrict buses and HGVs from the end of 2021, and a larger zone for the whole city from the end of 2023, but which does not include cars. 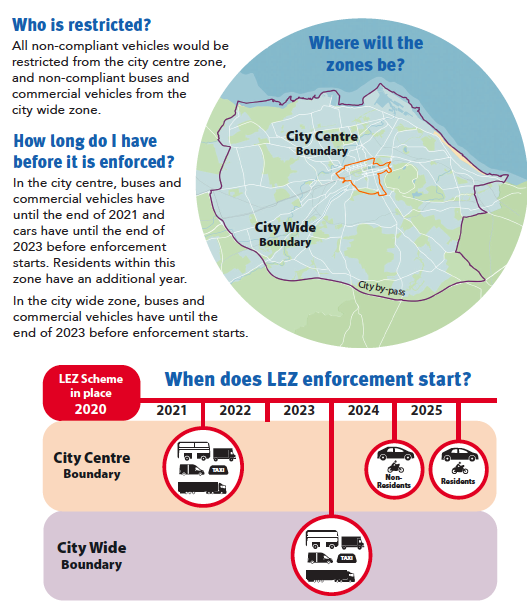 Edinburgh City Council aim for the city to be carbon neutral by 2030, with a transformation of the city centre and low emission zones key to delivering that aim. The Council also plans to make “use of council land and property for micro-generation, support local groups to develop renewables projects and encourage innovation in adopting new technologies”.

Edinburgh Council leader, Cllr Adam McVey has said: “We are quite clear the 2030 target should be the target for this organisation and this city – but with a hard limit of 2037.

Commenting on the Low Emissions Zones, Friends of the Earth Scotland’s Air Pollution Campaigner, Gavin Thomson, said: “This draft pollution plan from Edinburgh Council risks becoming a wasted opportunity that does next to nothing to bring down toxic traffic fumes in the city. Air pollution disproportionately harms the health of the most vulnerable people and causes 200 early deaths each year in Edinburgh.

READ MORE: Proposals to transform Edinburgh’s local transport system could make it ‘among the greatest cities in Europe’, environmentalists say

“The two-tier plans could mean tourists and shoppers will be breathing cleaner air in the city centre while people in residential areas could experience more traffic and air pollution as vehicles avoid the tiny city centre zone. Everyone in Edinburgh has a right to breathe safe air now, yet these plans will only begin to clear the air in one part of the city. Seemingly, the Council decided that some people in Edinburgh are more worthy of protection from air pollution than others.

“This lacklustre zone has been designed to achieve the bare legal minimum on diesel pollution, an objective which should have been met back in 2010. The Council has opted for the slowest possible lead-in times, meaning that it will be six years before any restrictions are applied to cars. It looks like they have prioritised not upsetting car owners above improving tackling dirty air to the benefit of all Edinburgh’s people.”

As the Scottish Index of Multiple Deprivation graph below shows, areas in the 20 per cent most deprived in Scotland are almost exclusively on the outskirts of the city. 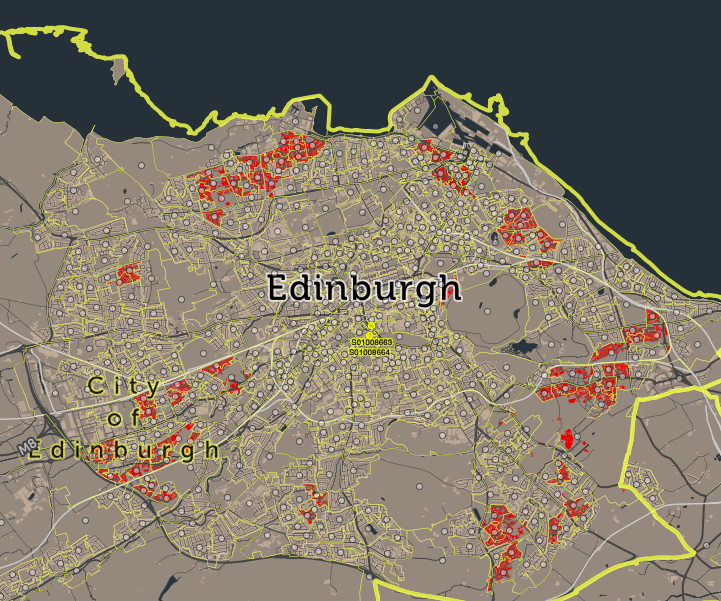 Friends of the Earth Scotland have previously praised the Council for its transport plans proposed last year, which it said could make Edinburgh “amongst the greatest cities in Europe”. The plans proposed the city centre becoming “a largely traffic free zone with controls in place to allow for essential traffic and with pedestrian priority in the city, town, and local centres.”

Thomson continued: “Edinburgh Council has brought forward really good transport plans in recent months and is investing in walking and cycling. But their Low Emission Zone must be revised to cover the whole city and restrict the most polluting vehicles, including cars. The Council must seize this opportunity to make sure all our children breathe clean air, and bring down climate emissions from our transport system.

“We would encourage everyone to have their voice heard in this consultation and demand that the Council strengthen these plans.”

Edinburgh currently has six Council designated air pollution zones, where air quality standards are not met. In addition, Friends of the Earth Scotland revealed four locations across the city with illegal pollution levels in 2018.

Responding to Thomson’s remarks, Councillor Lesley Macinnes, Transport and Environment Convener, said: “Our Low Emission Zone proposals have been developed following a great deal of analysis and modelling in close partnership with SEPA and Transport Scotland and are crucial to addressing poor air quality in Edinburgh and the significant risk it poses to human health. We’ve already had a fantastic, positive response to our consultation on these proposals.

“Plans for a city centre boundary aim to tackle the worst concentrations of air pollution in a densely populated area with the highest incidence of visitors and commuters while, on a wider scale, the city wide boundary will tackle the impact of vehicles that tend to make multiple trips and are responsible for the highest levels of pollution – buses and commercial vehicles make up two thirds of harmful emissions.

“Proposed grace periods will allow drivers to adapt to vital changes. We are also, of course, focusing on a wider range of highly ambitious projects alongside the development of an LEZ. These are designed to improve active travel facilities and public transport access, including the City Centre Transformation and the City Mobility Plan. This is part of our wider commitment to create modal shift amongst the public, making active travel and trips by public transport easy and attractive as an alternative to the car. The LEZ is designed to tackle established air pollution problems, not to achieve traffic reduction.”

In 2018, FoE Scotland criticised Glasgow City Council’s Low Emission Zone plans, which it described as “no ambition zone”, due to the rule only initially applying to 20 per cent of Glasgow’s buses.