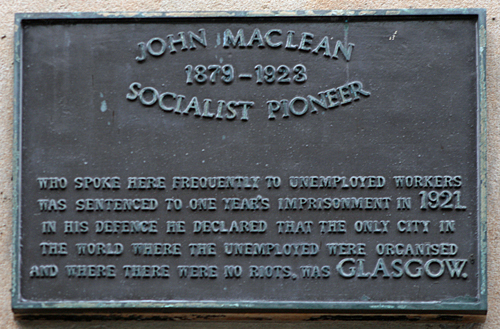 THIS WEEK marks the centenary of the Scottish revolutionary socialist John Maclean’s historic speech from the dock of Edinburgh’s High Court, where he faced charges of sedition following his vocal public opposition to the First World War and attempt to organise a workers’ mutiny against it.

“I wish no harm to any human being,” said Maclean, “but I, as one man, am going to exercise my freedom of speech. No human being on the face of the earth, no government is going to take from me my right to speak, my right to protest against wrong, my right to do everything that is for the benefit of mankind. I am not here, then, as the accused; I am here as the accuser of capitalism dripping with blood from head to foot.”

The Edinburgh People’s Festival, which has since 2002 sought to provide a more working-class alternative to the traditional Edinburgh festival season, will celebrate the anniversary with a re-enactment of Maclean’s speech on 12 May, outside the High Court in the capital.

CommonSpace spoke to Scottish Socialist Party national co-chair Calum Martin, who will be reading the speech while dressed as Maclean, about the legacy and continued relevance of the famous Red Clydesider.

“The thing that always strikes me about the speech from the dock is that the vast majority of it could have been written today,” Martin explains. “The issues he’s addressing are just as relevant today as they’ve ever been.

“Maclean’s vision of independence was always about Scotland as one part of a much larger world that should be interconnected.” SSP national co-chair Calum Martin

While John Maclean’s reputation is still well-known in Scotland, Martin hopes that the centenary, and the efforts of the People’s Festival to commemorate it, lead more people to exploring his life and thought.

“I’m hopeful that, if there’s one thing that comes out of this event, it sets more folk looking towards what Maclean was about and what he stood for – I think the event will be real success in that regard,” says Martin. “I think he’s one of these people that a lot of folk are probably familiar with, but have never had the chance to get down to the details of what he was actually standing for. One of the things I’m hoping will come out of this event is making him more than just a name that people are vaguely aware of, so they get the chance to learn.”

Perhaps more so than his contemporaries, Maclean was deeply invested in international solidarity, whether through his opposition to the First World War, his sympathy and communication with like-minded revolutionaries in Ireland, and his status as the Bolsheviks official representative in Scotland following the Russian Revolution.

Martin argues that there is much the contemporary Scottish left can learn from Maclean’s internationalism as well as his nationalism, each being complimentary aspects of his political outlook.

“Maclean’s vision of independence was always about Scotland as one part of a much larger world that should be interconnected – a social Europe, a social world, a socialist Scotland. He saw all nations and all peoples independent and standing on their own feet, but working together in a much more egalitarian society than we have today. Even in the context of Brexit, so many of the issues we face across the world are the same issues – poverty, pay, the ill-division of wealth, the concentration of ownership in private hands.

“If we want to challenge capital on a global scale, we have to be able to do that not just at home, but by working with those abroad trying to achieve the same thing.”