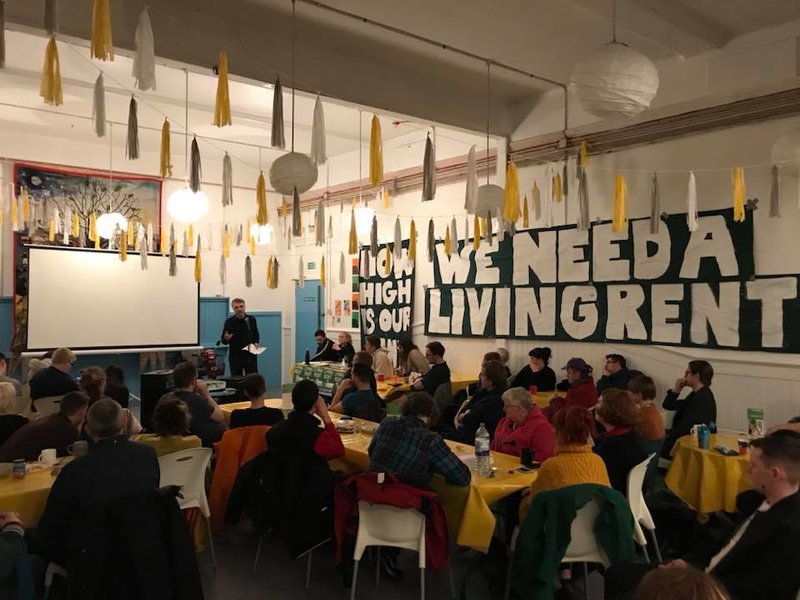 SCOTLAND’S TENANTS UNION Living Rent is to hold the organisations’ second annual conference in Edinburgh on Saturday after analysis by jobs site CV-Library revealed Edinburgh was the third most expensive place to rent in the UK.

“Generation ‘rent’ is well and truly in full swing, and while some cities offer manageable living costs and generous pay packets, others could be pushing workers to breaking point.” Lee Biggins

Lee Biggins, the founder of CV-Library, commented on the findings: “Generation ‘rent’ is well and truly in full swing, and while some cities offer manageable living costs and generous pay packets, others could be pushing workers to breaking point.

”What’s more, these findings do not factor in additional costs on top of rent, such as council tax, electricity, water and gas bills, not to mention other monthly outgoings including mobile phone and internet contracts, pension, transport, insurance and so on. This means that those living in cities such as London, Brighton, Edinburgh and Bristol could be heading towards debt levels each month.”

Launched in 2015, tenants union Living Rent successfully lobbied the Scottish Government for concessions in the new Private Tenancies Bill. Whilst the final legislation fell short of the union’s hopes on a system of comprehensive rent controls, it did contain measures to protect tenants against unfair rent increases and unjust evictions.

The Scottish Government did include legislation for so-called “rent pressure zones”, giving local councils the ability to apply to use a package of rent reduction measures which would limit the total cost of rent in certain areas. Although the legislation has so far not been used in Scotland, some Edinburgh Councillors have said they would consider it.

Speaking to Commonspace ahead of the conference, Living Rent member Rebecca Chan said the union was excited to look back on its achievements in 2017 and plan the year ahead: “The year ahead should be a busy one. Our growing member defence teams will continue to hold landlords and letting agencies accountable for bad practice, and to protest unjust evictions.

“We will also be focusing on our Winter Break campaign, which aims to implement a law against evictions during the winter months, as we see so many winter deaths amongst the homeless population in Scotland, and think this is completely unacceptable.

“We’re also keen to see councils utilising their new powers to declare high-density areas ‘rent pressure zones’, and to push for rent controls in these areas.”

“We will also be focusing on our Winter Break campaign, which aims to implement a law against evictions during the winter months, as we see so many winter deaths amongst the homeless population in Scotland, and think this is completely unacceptable.” Rebecca Chan

Chan told Commonspace that the union now boasts a community of 2000 members and supporters, and is entirely self-funded by member subscriptions and donations.

From this, they have been able to recruit two part-time staff to help run the organisation: “We rely on our dues-paying members to carry out the work we do. Our members allow us to remain independent from private interests so that we only have to answer to our community of tenants.

“The organisation is run primarily by volunteers – ordinary tenants with day jobs who are united by the fact that they want a fairer deal for renters in Scotland. We now also have two part-time members of staff, one in Glasgow and one in Edinburgh, who are taking on the role of organising tenants and running campaigns against bad practice in the PRS [Private Rental Sector].”

The union also takes on cases of bad practice and helps its members resolve problems with the landlord or letting agent. Chan told Commonspace they are currently working on around 50 cases.

Although primarily active in Edinburgh and Glasgow, Chan said that the union is constantly welcoming new members from across Scotland.