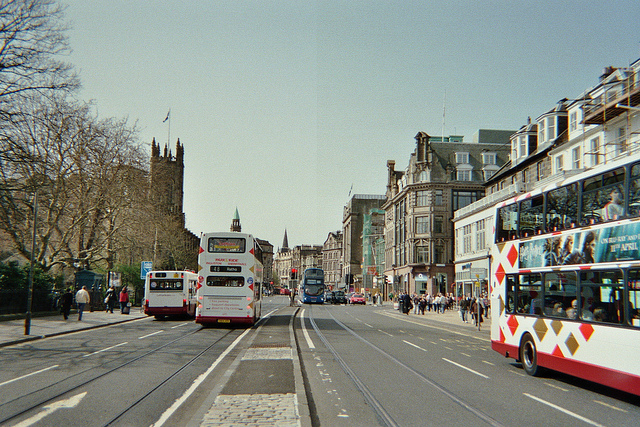 Ahead of 18-month road-closing trial in the capital, public consultation reveals widespread support for “ambitious” transformation of the city centre

A MAJORITY of Edinburgh residents who contributed to a recent council consultation have backed traffic reduction in the capital and called for more radical solutions in transforming the city’s infrastructure.

Of the 5000 people who took part in the ‘Connecting our City, Transforming Our Places’ consultation between September and November 2018, 88 per cent said they wanted to see changes to the way Edinburgh’s city centre is managed.

A further 51 per cent believe that an “ambitious and widespread approach” is necessary to achieve significant change, while 73 per cent expressed their support for a reduction in the amount of general traffic in the city centre.

75 per cent supported the creation of some pedestrianised streets in the city centre and town centres. Proposals for selected monthly vehicle-free street events were supported by 62 per cent.

The quality of Edinburgh’s central streets and public spaces, however, was found to be satisfactory by only 37 per cent of respondents.

According to the report, there was a “clear perception” among focus group participants that the city’s infrastructure was stretched to breaking point, and a view that visionary solutions were needed if the city were to work properly. They were frustrated with suggestions that appeared “to tinker at the edges, or shift the problems elsewhere.”

The consultation was launched last year to seek the public’s views on three inter-related strategies for delivering change to the capital: the Edinburgh City Centre Transformation, the City Mobility Plan and Edinburgh’s Low Emission Zones.

In addition to these initiatives, May 2019 will see the beginning of an 18-month trial by Open Streets Edinburgh, which will test the impact of closing a small number of roads throughout the city centre to vehicles between 10am and 5pm.

Edinburgh’s Transport and Environment Convener Councillor Lesley Macinnes commented: “Our vision for the city’s future is ambitious and it’s clear from the recent consultation that the people of Edinburgh share that ambition. There is not only a demand for change, but recognition that this needs to be significant in order to achieve an inspiring, healthier and more inviting city in which to live, work and play.

“As one of the fastest growing cities in the UK, it is clear that doing nothing is not an option. This is reflected in our desire to embrace active travel solutions, while also building upon our award-winning public transport offering by taking the trams to Newhaven, a step forward which would contribute to a truly connected, sustainable city centre.

“We must plan effectively and test radical options if we are to get the right balance in the future that will provide a high quality of life and access to opportunities for all residents, in particular those that experience inequality.”

Transport and Environment Vice Convener Cllr Karen Doran also commented: “This is about creating a co-ordinated, strategic approach to managing our city, safeguarding the centre for the community and creating a safer, more secure and healthier atmosphere for everyone. I’m delighted that feedback to our consultation supports these aims.

“We’ll be considering this report on the same day as the Final Business Case (FBC) for taking trams to Newhaven, a development which, if approved, would be pivotal to our ambitions for reimagining the city centre and its purpose, improving connections to major areas of employment, leisure and development.”

Edinburgh World Heritage director Adam Wilkinson added: “There is no doubt that the conservation and enjoyment of the Old and New Towns World Heritage Site in Edinburgh are undermined by the effects of heavy traffic and congestion.

“Noise, pollution, damage to the fragile environment, and unsightly visual encroachment of our streets and open spaces by excessive traffic are all issues that need to be addressed urgently. We therefore wholeheartedly applaud the desire for radical change revealed in this important consultation and urge to city to respond effectively.”

Calls to improve connectivity, environmental measures and quality of life in Scotland’s urban centres has grown in the wake of the Scottish Government’s Transport Bill and subsequent agitation from local activists for more radical solutions.

In November 2018, the Glasgow Connectivity Commission published a series of recommendations to reform Glasgow’s transport sector and address its impact upon the city, including a ‘strategic repurposing’ of Glasgow’s road network to prioritise people-friendly spaces, engagement by Glasgow City Council with the Vacant and Derelict Land Commission to bring dead spaces into productive use, the creating of segregated cycling corridors in the city centre and a new partnership between the council and Glasgow bus operators.