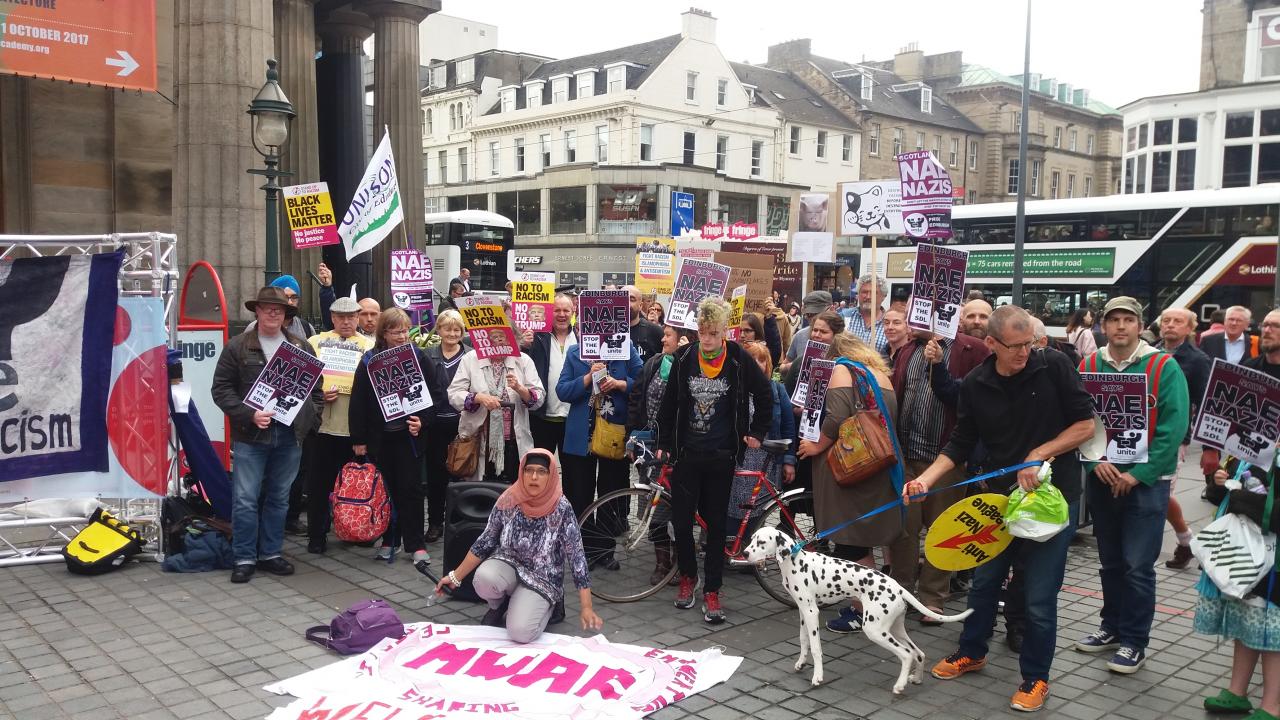 EDINBURGH joined cities across the UK and the United States on Monday evening in a vigil for Heather Heyer, the 32-year-old activist killed on Saturday afternoon when a car plowed through an anti-fascist demonstration in Charlottesville, Virginia.

Gathering outside the National Gallery of Scotland, representatives from Unite Against Fascism, the Edinburgh Stop the War Coalition, the Scottish Palestine Solidarity Campaign, Edinburgh Against the Racist SDL and the Edinburgh trade union movement spoke in memory of Heyer and in solidarity with all those fighting racism and fascism around the world.

Heyer, a member of the Democratic Socialists of America (DSA) and the Industrial Workers of the World (IWW), was part of a counter-demonstration against the white supremacist ‘Unite the Right’ rally, which had assembled from across America in the college town of Charlottesville to violently protest the removal of a statue of Confederate general Robert E. Lee.

Shortly after a state of emergency was declared by Virginia governor Terry McAuliffe, a car was used in a vehicular attack against anti-racist and anti-fascist counter-protestors. In addition to Heyer’s death, 19 others were also injured in the attack. The driver, James Fields, was quickly arrested for second-degree murder along with several other charges.

“Those people who murdered Heather Heyer in Charlottesville were not just racist, but the extreme fascist right.” Pete Cannell, Edinburgh Stop the War Coalition

In his initial reaction to the events in Charlottesville, US President Donald Trump attracted widespread outrage by condemning “hatred, bigotry and violence on many sides”, rather than explicitly and specifically condemning the far right, many of whom have expressed vocal support for Trump’s presidency.

Surrounded by the bustle of the Fringe, the Edinburgh vigil held banners and placards aloft while speakers described the links between Saturday’s tragic events and similar struggles around the world.

Pete Cannell, a representative of the Edinburgh Stop the War Coalition, said: “When the Stop the War Coalition began, it had two major objectives. The first was to stand against the invasions and bombings of countries abroad the British government was involved in back in 2001, and remains so now, 16 years on.

“But at the same time, it also understood that when you treat populations of other countries as somehow ‘other’ …  then that also encourages an atmosphere of racism and Islamophobia.

“And while those people who murdered Heather Heyer in Charlottesville were not just racist, but the extreme fascist right, people like that thrive in the conditions created by so-called ‘respectable’ people – those people who contribute to the mass media, those people who are in high office in this country, and in the United States.

“If you’re looking for links between racism and war, you don’t need to go much further than Donald Trump. Donald Trump is incapable of naming what happened in Charlottesville as what it was, which was an action by fascists and the far right. He can’t condemn it, because he’s part of fostering that atmosphere in the first place.

“He’s also currently talking about raining ‘fire and fury’ on the Korean peninsula. Some of the people around him are talking about ‘extinguishing the population’ of North Korea – 24 million people. You can’t talk like that if you’re not deeply racist.”

“We all know that when the far right gets moving and turns its armchair racism into actual action, people get hurt. People get killed.” Duncan Smith, chair of Edinburgh Trades Council and Edinburgh City Unison

Duncan Smith, from chair of the Edinburgh Trades Council and chair of Edinburgh City Unison, said: “We all know that when the far right gets moving and turns its armchair racism into actual action, people get hurt. People get killed. We’ve seen that in Charlottesville. When the fascists march, we need to be there. The trade unions need to be there.

“We oppose the Prevent strategy in Britain, which is fundamentally anti-Muslim. And that’s not coming from a few wacky extremists on the far right – that’s government policy that encourages teachers and lecturers to spy on pupils of Muslim background and report them.

“We must fight racism in a number of ways, both in our work and in campaigning.”

“As always, police aided and protected the fascists, while permitting and assisting wholesale violence against counter-protestors.” Industrial Workers of the World General Defense Committee

Vigils for Heyer and the other victims of the Charlottesville attack were also held in Glasgow and London, as well as in cities and towns across the United States.

In Charlottesville itself, initial plans for a vigil were cancelled by local authorities due to possible further violence. Organisers stated in a press release that “a credible threat from white supremacists created a situation wherein we could no longer guarantee the safety of those who attended”.

However, a candlelight vigil was later held at the location of Heyer’s death, attended by some of those who had been present during the attack.

A statement released by General Defense Committee of the IWW, the trade union of which Heyers was a member, condemned all those involved in Unite the Right, as well as the Charlottesville authorities:

“Fascism is a deadly threat to all of us. There is no escape from the demand that we confront it. Politicians, the police, and the university will not save us. We cannot vote our way to safety. As always, police aided and protected the fascists, while permitting and assisting wholesale violence against counter-protestors. University officials refused to use campus security to protect students and others from a gang of hundreds of fascists.

“The General Defense Committee calls upon all people who value human life, freedom, and dignity, to enter the struggle against fascism in every way they can. Give to the fundraisers for survivors and surviving family members of today’s fascist murder.”