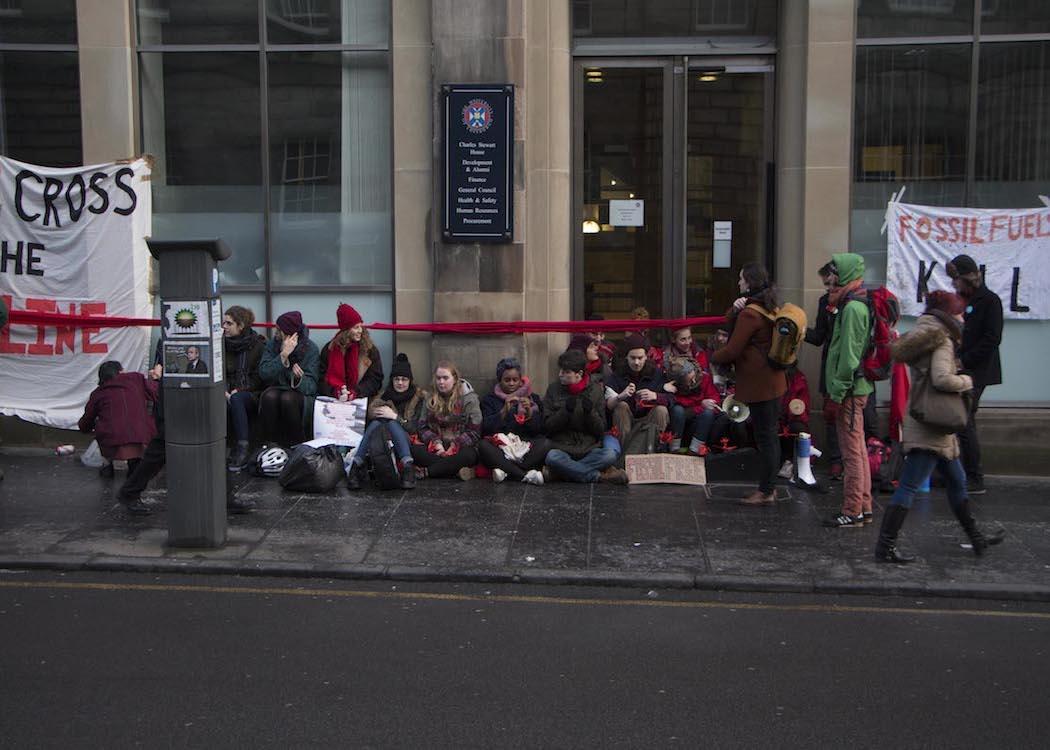 THE FINANCIAL CENTRE of the University of Edinburgh has been blockaded this morning [Friday 12 February] by students demanding an end to investments in fossil fuels and the arms trade.

Protesters have gathered outside Charles Stewart House to oppose over PS6m of financial endowments held in war or climate change industries.

Last year a 10 day occupation by students over unethical investments led to concessions from the university, who have agreed to divest from companies most responsible for pollution and conflict.

“Investment is a political choice with real consequences for some of the most vulnerable communities worldwide.” Ellie Jones

Ellie Jones, student campaigner with People & Planet, said: “The university cannot continue to invest in industries that cause and profit from climate change and war. Investment is a political choice with real consequences for some of the most vulnerable communities worldwide.”

Previously The Student reported that Edinburgh had invested PS621,000 in Meggit, an arms company which supplys drone warfare in Afghanistan and sells weapons to the abusive Bahraini regime.

PS745,000 of stock was also identified in Martin Marietta, a subsidiary of the world’s largest arms company Lockheed Martin, which sells ballistic missiles.

Over half a million was also held in Rolls-Royce, which makes millions in profit from sales of military engines.

The university has promised to end investments in firms that make over 20 per of their turnover from arms and those responsible for the most extreme examples of pollution. However, campaigners want the ethical investment policy to go further.

Hannah Roques, student campaigner with People & Planet said: “The Paris Climate summit has only reinforced the message that civil society must lead the way to a safer and more sustainable future. Our public institutions are crossing red lines by failing to take immediate action on the climate and we must now hold them to account.”

Scotland’s universities receive hundreds of millions of pounds in public subsidy ever year.

Campaigners argue that, due to their status as quasi-public institutions, universities have a responsibility to avoid investments in companies complicit in destructive practices.

The protesters at the University of Edinburgh warn that further action is likely if “full divestment” is not achieved.

Picture courtesy of People and Planet