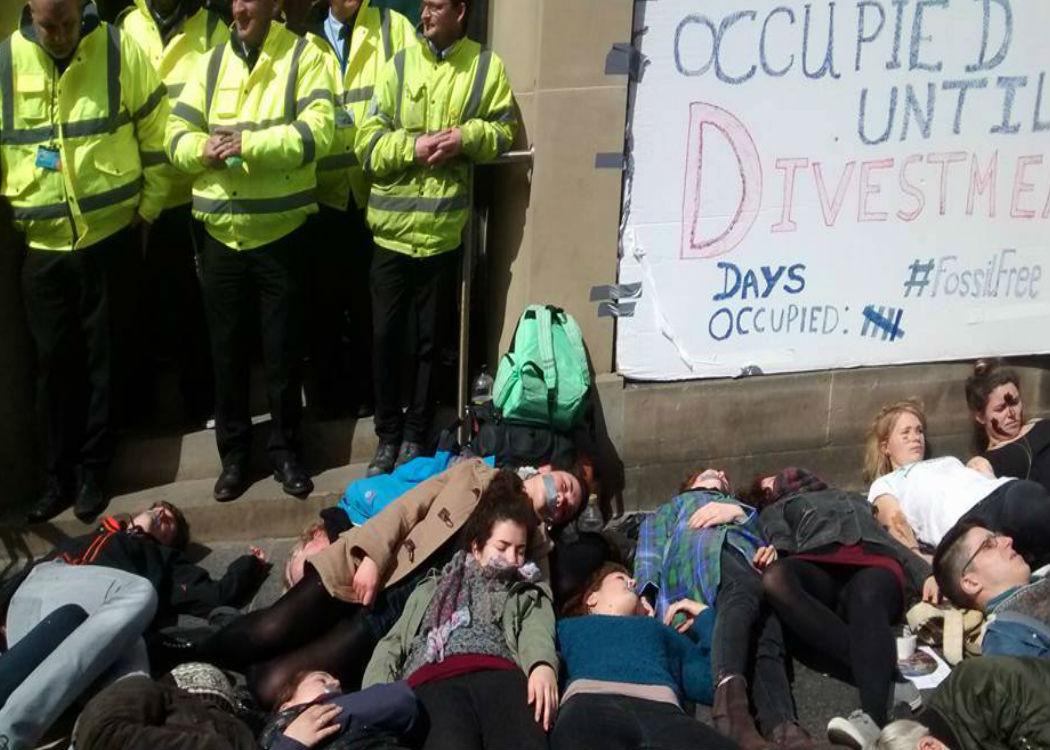 Students claim that university is putting its image above student welfare

THE UNIVERSITY OF EDINBURGH has said that it “deeply regrets” an incident where a security guard pinned a student down by his throat but has refused to name the outsourced security firm involved.

The ‘assault’ (click here to read more) took place outside Charles Stewart House on Chambers Street where students are occupying the university’s finance department to protest the institution’s failure to divest from fossil fuels.

Police are now investigating the incident.

It involved a member of an unnamed, outsourced security team been brought in to deal with the protest which has lasted over a week.

Two days ago an advert was posted online by Steve Keenan, Operations Manager at Pro-Tects Security Services, seeking eight “door supervisors to help look after a university which has protesters at the moment”.

When CommonSpace phoned Keenan to query any involvement of the firm in this incident, he refused to comment.

“The University is aware of, and deeply regrets, the unfortunate incident that is currently being played on social media” University of Edinburgh

Protesters have made a series of complaints regarding the conduct of security including reports of sexist and threatening comments being made towards students.

A University of Edinburgh spokesperson said: “The University is aware of, and deeply regrets, the unfortunate incident that is currently being played on social media. The matter is now in the hands of the police.

“We continue to support the right of students to peacefully and lawfully demonstrate and the University is using private security outside its buildings in Chambers Street in order to secure the safety of staff and students during the occupation.”

“We are constantly reviewing our security arrangements to make sure that they are appropriate to the circumstances in what is an evolving situation.”

When asked explicitly by CommonSpace about the identity of the firm involved, a spokesperson for the university said that they could not disclose such information.

Student occupiers criticised the university for failing to respond directly to them inside and accused the institution of putting its image above student welfare.

“The University has not yet responded to the students but has instead put out a statement to the press which doesn’t mention any sort of repercussions for the security who have assaulted staff,” Kirsty Haigh told CommonSpace.

“It’s utterly unacceptable that the University is putting its image above student welfare and thinks the behaviour of its security is more acceptable than divesting from fossil fuels.”

After a review, the University of Edinburgh announced last week that it would continue to invest in fossil fuels. It claimed that it would use research activities and “responsible investment” in an attempt to get companies to reduce their emissions.

Those who have visited the occupation to show support to the students include Nobel Prize winning economist Professor Graciela Chichilnisky and Scottish Green MSP’s Alison Johnstone and John Finnie.

The protest has lasted over a week and freedom of access has been denied with food having to be passed to students through security who are blocking the entrance.