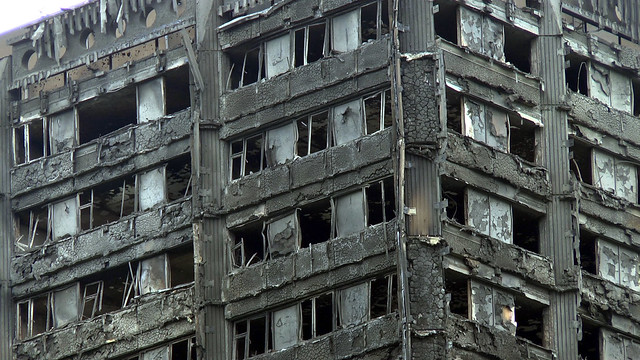 Marking two years since the Grenfell fire, which took 72 lives, CommonSpace editor Ben Wray says nothing has changed since because elites remain unimpeded – the need for organised resistance on a class basis is paramount

THE Grenfell fire two years ago today [14 June] should have come as a shot through the dying heart of neoliberal Britain, but it didn’t. Neither did Carillion. Or the financial crash.

As Sean Baillie, an organiser for the Living Rent Tenants’ Union, said to me in the days after the fire, “there’s all these columns in The Guardian saying ‘neoliberalism is over’, but nothing’s actually changed”.

I had my doubts about that. The towering inferno seemed like such a symbolic moment of everything that’s wrong with the system, and the fury from the community which accompanied it appeared to put the seal on the idea that there’s no going back from this. But two years on, Baillie was obviously right – and if anything things have become even more obscene.

Just look at the nick of the Tory leadership contest. A bunch of toffs wax lyrical about tax cuts for the rich and line up to make mealy-mouthed apologies for taking drugs in their youth, while as legislators they have put working class kids in prison for seven years and ruined their whole lives for doing the same.

That’s not simply about “hypocrisy”, as most of the media is fond of saying – I’m sure if the son of one of Michael Gove’s Etonian friends was caught with a bag of cocaine in a Kensington night-club, he would find a way to get him off as well. It’s really about class prejudice – Gove, Boris and co will I’m sure in all sincerity believe that while there is little chance of Etonians causing widespread social disorder through drug abuse, the same cannot be said for the plebs. Tough sentences act as a deterrent to keep the hoi polloi in line – it can’t possibly be compared to a posh 20-something journalist snorting a few lines.

That class prejudice is institutionalised into every aspect of how the British state and the wider economy works. There’s always a good reason why the have’s don’t need to play by the same rules as the have-not’s. £1.3 trillion was found to rescue Britain’s banks from their own failure, but the millions needed to replace all dodgy cladding on council estates across the UK following the Grenfell fire? There’s not the money for it. Socialism for the rich, infernos for the rest.

Of course Scotland is no exception to this class divide. We don’t know exactly what the truth is in the Coatbridge ‘blue water’ school crisis yet, but just as we know that the Grenfell fire would never have happened if the residents were not poor, so we know that – as environmental health professor Andrew Watterson implied to CommonSpace earlier this week – a private school would never be built on an old toxic landfill site.

And it’s not just about the class dynamics of where these incidents always happen, it’s about how they are handled as well – if ‘blue water’ appeared in a school in a middle class neighbourhood, you could be sure it wouldn’t take over a year before a water investigation team were sent out to check it (one janitor claims he raised the issue a full five years before it was investigated). And if parents and teachers demanded health screening tests, and raised the alarm about the financial cost of having such tests done privately, you could be sure the Council would respond.

Whether it’s the ‘blue water’ school crisis, or the shutting down of a sexual health clinic in Castlemilk, class shapes the decision-making of civil servants and politicians just as it does chief executives and landlords. And it’s the uneven balance of class power which is why we have not seen the end of the neoliberal order, despite it’s spectacular failures.

Class is no less permeated into the fabric of Britain in 2019 as it was when the country was riven by strikes in industrial yards, docks, mines and plants. The decline of trade union strength has, if anything, seen the class divide grow in our society, it’s just that the working class don’t work in the same industries and have the same institutional framework for organised resistance as it previously did, or at least not to the same extent, and at least not yet.

No one knows exactly where and how the dam is going to break – it could be community resistance over a ‘blue water’ school or a Grenfell, it could be a rent strike, it could be a debt strike, or it could be a renaissance of workers’ power in the new ‘dark satanic mills’ of an Amazon distribution hub. What we should be clear about is that whether it is a corporation, a landlord or the state, elites will keep taking liberties – keep pushing the boundaries – when it comes to jobs, contracts, wages, safety or whatever else they can cut back on or de-regulate, as long as those on the other side of the class divide let them get away with it.

Gary Younge, writing in The Guardian today on the second anniversary of Grenfell, excoriates all of us for our power to forget after initial indignation, whether it be Grenfell or Windrush or whatever scandal.

“The nation’s capacity for indignation is apparently railed only by its propensity for distraction. It’s not that we don’t see injustice or cannot comprehend it. It’s that we apparently get bored by it. We are becoming very careless with our innocence: we keep losing it, only to find it again in time to be “shocked” by the next outrage.”

Younge is of course right, but this tendency to drift from one outrage to the next is not some inherent psychological characteristic of the British nation – it’s rooted in power relations. Forgetting becomes easy if there is no organised resistance forcing us to remember, fighting for justice and rights and equality. People don’t get bored by occupations, strikes, direct actions etc – they take sides. Extinction Rebellion has been an effective protest tool because it’s forced people not just to hum-drum about the impending doom of climate catastrophe over a coffee, but to decide what are you willing to do – what disruption are you willing to put up with – to make something actually change.

Even then, this form of direct action has its limits. It’s time restricted, involves a limited number of activists and is vulnerable to exhaustion and frustration. The step beyond protest is action which strikes at the heart of the system of exploitation, whether it be withdrawing our labour, withholding our rent or refusing to pay our debts. Why? Because the system stops working if we stop doing these things. The ideologues of our age would have you believe that’s not true, that the system can shift and re-shape anywhere in the world, immune to all resistance – but the reality is that capitalist economy remains reliant on all of us. And by acting this way we act collectively, and we act on a class basis.

It was as far back as 2006 when multi-billionaire Warren Buffett said “there’s class warfare, all right, but it’s my class, the rich class, that’s making war, and we’re winning”. That winning hasn’t stopped. It’s not that we need a return of class analysis or class critique of modern Britain. Those things never went away. What we need is the return of class struggle – from our side.