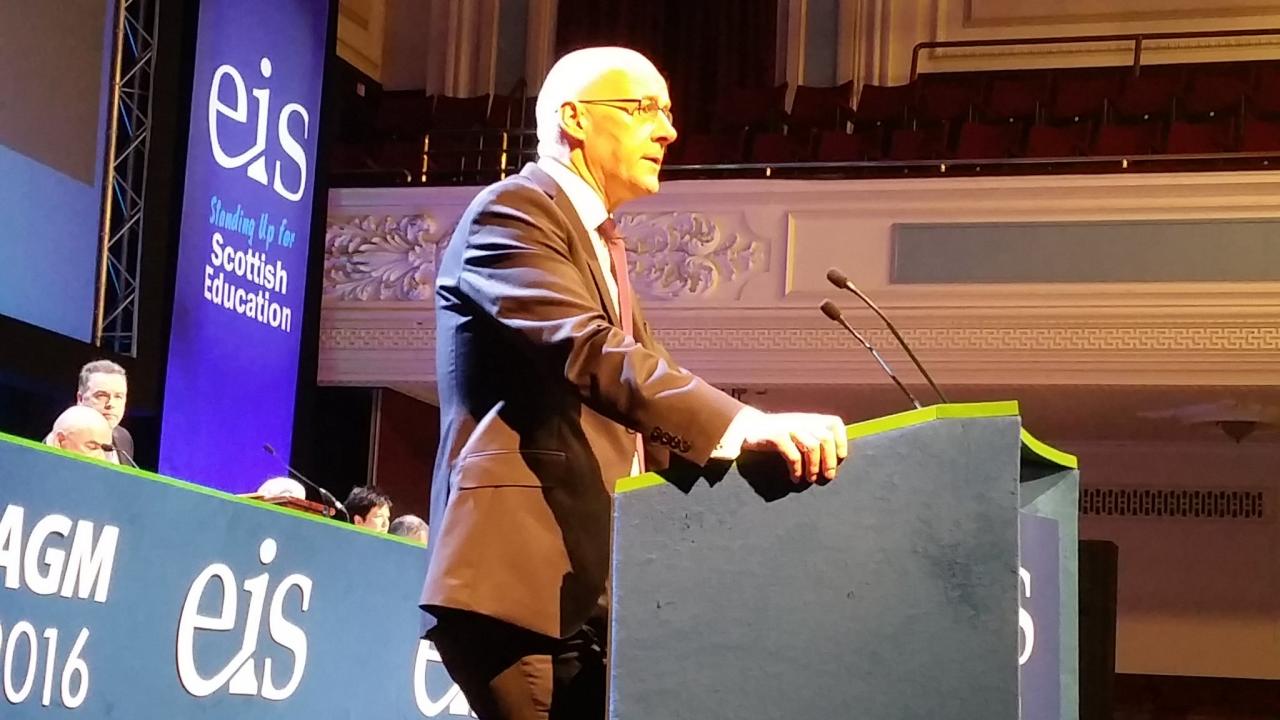 THE EIS teachers’ union has voted to support a boycott of the Scottish Government’s plans for national testing if the testing arrangements are deemed “unacceptable” by the union.

The vote, which endorsed a motion for a possible boycott, came at the union’s annual general meeting (AGM) which saw the union adopted positions on a range of issues facing the teaching profession in Scotland.

The conference, held between Thursday 9 June and Saturday 11 June, was overshadowed by a mood of distrust between teachers and the Scottish Government over plans to institute a new national testing scheme as part of the government’s drive to close the so called ‘attainment gap’ – the difference in educational achievement between the richest and poorest students.

EIS Education Convener, Susan Quinn told the AGM that the union would “make an absolute stand against any suggestion of testing that puts whole cohorts of children through them [national tests] at the same time.”

The Scottish Government announced plans to institute standardised testing in September, having campaigned on education reform in the 2016 Scottish elections. The exact form of testing is still being negotiated between teachers’ unions and the government.

The conference was addressed by the Scottish Government’s education secretary John Swinney, who was the subject of heckling from the floor by some teachers as he made the case for standardised testing.

Read: 5 tensions between teachers and the Scottish Government that will surface at the EIS conference

Commenting on the passing of the motion, Swinney said: “Closing the attainment gap and improving attainment across education in Scotland is essential to giving our children the best possible start in life which is why I am determined to drive forward this agenda every day that I hold this office.

“The information we will collect as part of the National Improvement Framework will give the most detailed picture ever of progress across Scotland, helping us to tackle, and ultimately eliminate, the attainment gap between children from the most and least disadvantaged backgrounds.

“That is why I believe industrial action would not be in the interests of anyone, least of all pupils and parents. The issues and concerns being raised by EIS are being addressed but we recognise there is more to be done.

Motion 48 calling for the union leadership to hold a ballot for strike action over workload was also carried, following a successful ballot of teachers in the Scottish Secondary Teachers Association (SSTA).

The AGM also voted for motions to investigate and report on the government’s version of standardised testing, an investigation into the implications of the closure of private finance constructed schools in Edinburgh for building faults this year and for the union to give refugee children a welcome pack upon arriving in Scotland.