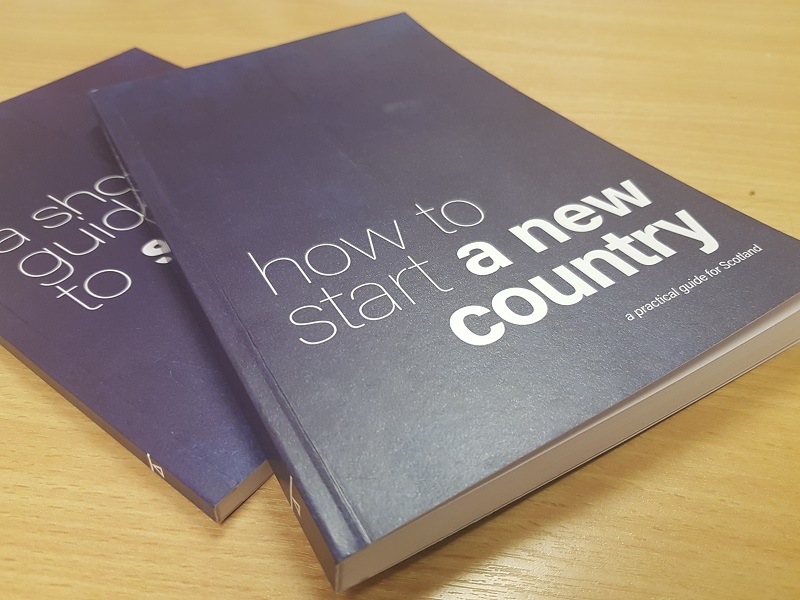 HOW TO START A NEW COUNTRY picks up from the central thrust of the author Robin McAlpine’s last publication, Determination (2016), which advocated then that we need to prepare a detailed plan for an independent Scotland.

Eighteen months on, we now have a resource and an accessible guide which sets out what that plan could and should cover.

It is written “for those who believe in Scottish independence” and those “who are open minded (even if they begin sceptical)” who want to explore what would happen next. This book is timely and gets  into the nuts and bolts of what this would entail. And it doesn’t stop there: it is an invitation for all of us to contribute to the discussion which has to follow.

This book has lots of ideas and raises many questions. The key question is, why not? Why wouldn’t we continue to think about and visualise the kind of country we want to live in? For those that may say we had our chance in 2014, the result of the independence referendum doesn’t mean we have to stop making the case. We must keep pushing forward ideas and proposals which individually or combined can improve the everyday lives of people in this country.

For those of us who do believe a new country is possible, it makes sense to consider how this could happen. The referendum campaign of 2014, for me, was defined by the spirit and energy which manifested itself in the growth of a grassroots movement (the pro-indy side, of course).

The experience brought to life the idea of active citizens who have a voice and can influence what kind of country they live in now and in the future. So if we believe in the idea of self determination then that means continuing as we mean to go on, imagining the future and how to get there.

I am biased; I like what Common Weal does, the volume of ideas produced in a relatively short space of time, since forming in 2013. I believe engaging with people through a network of local groups and collaboration across civil society more widely, is contributing to ongoing dialogue about what is possible.

Achieving goals stated in Common Weal’s vision – like social and economic equality, environmental sustainability, community and cultural life, and democratic participation – is a long game and involves hard work. Have a look at Common Weal’s website to see the key ideas and the range and scope of the work underway, and cross reference this with the material cited in this book.

BUY NOW: How To Start a New Country by Robin McAlpine

Robin McAlpine speaks openly about the challenges and opportunities in building a country, making a compelling case to encourage us to think through and assess what we want and how to get it. The book is based on Common Weal’s White Paper Project and delves much further into subjects like developing infrastructure and new systems and how much that will cost; a new currency; a constitution; social security; and much more.

The book is wide ranging and structured in a way that flows and is interwoven, covering key topics of interest. Readers can work through the book as a whole and return to chapters and sections for more detail about specific topics.

There are already examples of how major contributions to the debate, like those of Common Weal, can influence national conversation and policy: we recently saw plans for a Scottish National Investment Bank (Snib) published by the Scottish Government. While this proposal has gathered steam this year, it has been in development for the last five years and Common Weal did significant work in the area before the government adopted the policy.

A key aim of the book is to stimulate thinking on a wide range of subjects, and it sets timescales to push forward a plan. The book is written in an engaging, discursive style – an approach which is helpful in navigating our way through the text and steering us through a myriad of tasks to develop our thinking.

This is complicated, technical and detailed, but necessary and urgent. So for those who want to read more about banking there is a chapter about it based on current work. I look forward to discussing with likeminded people and hearing from those who have actively advocated for Snib about how the proposals and opportunities presented by the Scottish Government will happen.

Robin McAlpine speaks openly about the challenges and opportunities in building a country, making a compelling case to encourage us to think through and assess what we want and how to get it.

How to Start a New Country takes an optimistic approach to the future. There is plenty of space devoted to critical reflection which encourages the reader to learn from the past or risk making old mistakes. For example, most people “did not have a clear sense of what the weeks, months and years after a Yes vote would look like” back in 2014 and this book seeks to address this. Here lies the inherent rallying call: “We cannot afford to let this happen again.”

While the work described gets into more technical details, legal issues and the intricate details of strategic planning, which may not inspire at first glance, we do need to grapple with the complexities and get a handle on the scale of the task outlined in this book.

Consider the chapter on a constitution, for example, which I feel strongly in today’s context, is increasingly becoming more urgent. Why? “A constitution is a written and enacted fundamental law, which is superior to ordinary Acts of Parliament.”

Let us consider this in light of the UK EU Withdrawal Bill, for example. If the Bill remains in its current form it will remove the protection of the EU charter on human rights when we exit the EU. That means rights and protections will be lost. Note that there is a significant limitation to the protection afforded by the Human Rights Act in the UK because it does not override acts of parliament.

The protection afforded by the EU charter of fundamental rights is stronger because where there is a conflict between basic rights contained in the charter and an act of parliament, the charter will prevail over the act.

The book is wide ranging and structured in a way that flows and is interwoven. Readers can work through the book as a whole and return to chapters and sections for more detail about specific topics.

Currently we do not know what the combined impact of the EU Withdrawal Bill and the negotiations will have on our devolved administration, but this just might open up a space to consider our future on our basic fundamental rights and freedoms more widely, particularly as the current UK Government is intent on repealing legislation, including equality and human rights legislation, and more likely to do so if re-elected in 2021.

Set in this context it is up to us to keep up the momentum and define what kind of country we want to live in, and we need to have a plan. A common thread underpinning this debate is as Dr Elliot Bulmer warns: “The question of whether laws and policies are tailored to favour the privileged few or the common good depends on whether the government is effectively held accountable to the people, or whether it is in the pockets of rich donors and corporate and financial interests.”

This is an excellent start on a vast topic and a resource to refer to and build on for the foreseeable future.