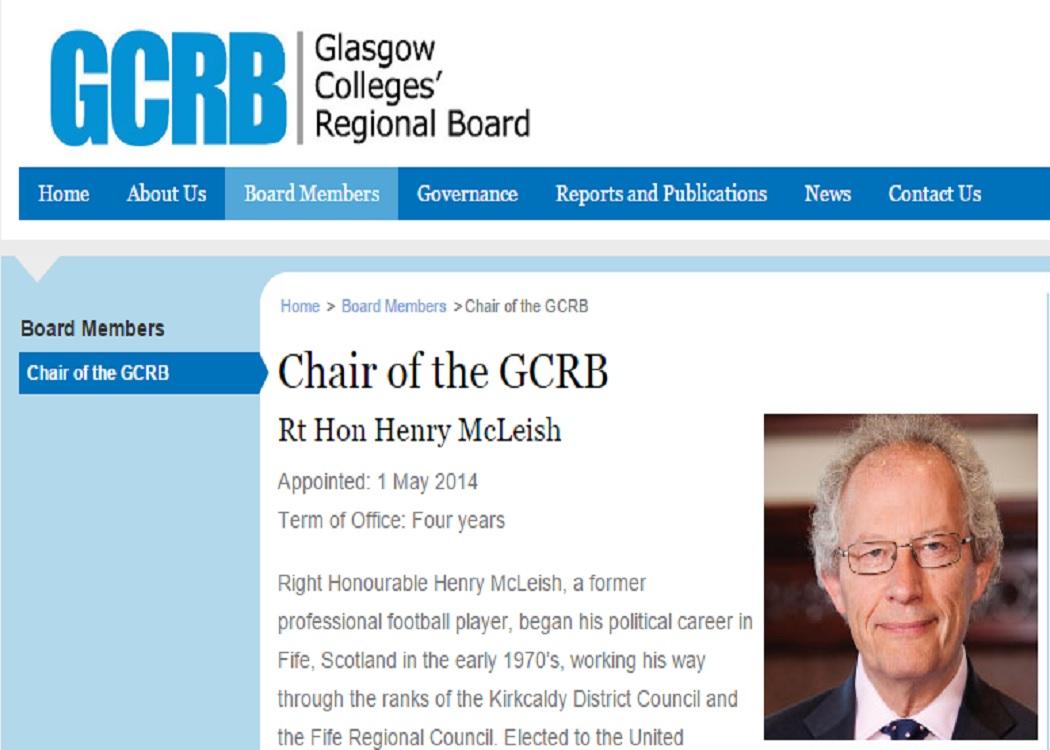 FORMER first minister Henry McLeish has stepped down as chair of the Glasgow Colleges Regional Board (GCRB), after a series of controversies over the leadership of Glasgow’s three merged colleges and the costs and expenses of the GCRB itself.

McLeish’s position has increasingly been questioned after four board members resigned over an escalating dispute between the GCRB and the Scottish Funding Council (SFC), which launched an investigation into the regional board after it failed to meet its timetable to become a fully functioning funding body.

The SFC was also known to be unhappy about the conduct of Glasgow Clyde College chair George Chalmers, who had fallen out with students after suspending college principal Susan Walsh. The students passed a vote of no confidence in Chalmers and called on McLeish to intervene, but he failed to do so.

McLeish had circulated a draft letter of complaint to GCRB members about the SFC chief executive Laurence Howells. However, the fact that his interim replacement is SFC board member Ali Jarvis suggests it is a dispute which he failed to win.

McLeish had earlier resigned as chairman of the Colleges Scotland board, which represents college management, so that he could “concentrate and focus” on the GCRB, but the Scottish Government later released a press release stating McLeish had resigned as GCRB chair.

In resigning, McLeish stated: “I am pleased to have taken GCRB to the position where it is now ready to move to the next stage, with a fresh set of challenges to be tackled by the incoming Chair. This represents a new chapter in the college regionalisation agenda and I was grateful to have had the opportunity to play my part in progress to date.”

A CommonSpace investigation last month found that the GCRB’s plans to “top-slice” PS400,000 from college budgets in 2015/16 to pay for its own running costs, something which the GCRB itself admitted would put Glasgow’s colleges in a “worse position” than the rest of Scotland.

Costs for the GCRB are 14 times that of its equivalent board in Lanarkshire, while McLeish claimed PS14,000 in expenses between August-December last year – almost double the cost estimated by the Scottish Government for an entire year. (Click here to read more).

The GCRB was established to manage the funding of Glasgow’s three new ‘super colleges’ which were set-up as part of the Scottish Government’s regionalisation process, and was supposed to begin work as a funding body from 1 April, but that date has been pushed back to August, prompting the SFC investigation.

She said: “The Scottish Government is grateful to Mr McLeish for his contribution to Glasgow colleges since taking up his leadership role in 2012. He has supported the development of the Board, and taken it to a position where it is now ready to move to the next stage in delivering for our college reform programme in the city.”

However, in a sign that the Scottish Government will be seeking to mend divisions that have emerged with four resignations from the board, including the two student representatives, Constance added: “This is a key moment for a new Chair to inject a fresh approach, bringing together students, staff and management to progress this shared endeavour.

“The interests of students remain our absolute focus.”

In accepting the position of interim chair, Ali Jarvis said that taking forward the college sector was “challenging agenda”, but she would endeavour to work with all partners to make it a success.

Students at Glasgow Clyde College were angered that McLeish refused to intervene despite the fact that their representatives were asked to leave the meeting in which principal Susan Walsh was suspended. Backed by NUS Scotland, students demonstrated outside the last Glasgow Clyde College management meeting demanding Chalmers resigns and McLeish makes his voice heard on the issue. Under new college governance regulation, student representatives on college management boards is mandatory.

Glasgow Clyde College student representative: “I think he [McLeish] liked students to be seen and not heard”

Alessio Gentile, education and development officer in the students’ association, told CommonSpace that he believed it was “positive” that McLeish had decided to step down.

“Along with Chalmers, McLeish has in effect slapped down student concerns. I think he liked students to be seen and not heard,” he added.

Gentile said he hoped Jarvis would come and meet student representatives in the Glasgow Clyde College Students’ Association (GCCSA) so they can begin to address their concerns.