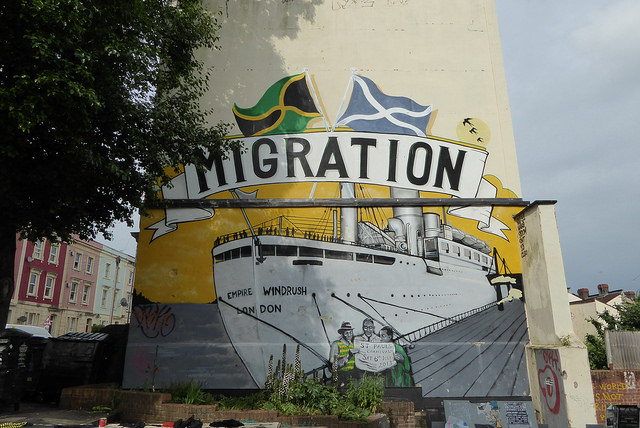 THE WINDRUSH crisis is a symptom of Britain’s racist empire legacy and the intensified anti-immigrant sentiment characteristic of recent years, children of Caribbean migrants have said.

SNP councillor Graham Campbell, journalist Robert Somynne, and Sir Geoff Palmer, Professor Emeritus in the School of Life Sciences at Heriot-Watt University, whose families came to the UK from the Caribbean, told CommonSpace that the situation underscores the conscious racism with which immigration law has been designed.

The UK Government was forced on Monday to apologise and promise to set up a task force within the Home Office to assist Commonwealth migrants whose right to remain in the UK and access public services and benefits have been called into doubt.

Journalist Robert Somynne said the situation “wasn’t a mistake” but a “deliberate policy based on racial malice and parochial blood and soil nationalism”.

Speaking to CommonSpace, Somynne said it was a stark reminder of the continuing racist legacy of the British Empire.

“What the situation reveals is that Commonwealth men and women are and were always only seen as additions or costs of empire,” he said.

“Successive British governments have expressed a desire to maintain connections with the former empire and change relationships.

“But the treatment of citizens who are and should be considered British by right shows the untrustworthy nature of the British state, its inherent racism and the underlining contempt held for immigrants no matter how hard they try to ‘integrate’.”

Known as the “Windrush generation”, in reference to the ship Empire Windrush which brought people from the West Indies to the UK to work in 1948, the issue impacts on people who came to the UK from Commonwealth countries before 1971.

This includes an estimated 500,000 people, largely from Caribbean countries, who were invited to the UK as citizens to work and rebuild the economy after the Second World War. Those who arrived as children did so on their parents’ passports at a time when they were still British Commonwealth citizens with British passports, and many have never attained a passport for themselves.

“Commonwealth men and women are and were always only seen as additions or costs of empire.” Robert Somynne

Subsequent immigration laws redefined their status as immigrants, and the 1971 Immigration Act granted people from the Commonwealth the right to remain indefinitely, but official documents to this effect were never issued.

Changes to immigration law since 2012 enforced new checks on people’s right to live in the UK by employers, educational institutions, the NHS, DWP, and as such an increasing number of cases have come to light of people from the Windrush generation being denied access to services and threatened with deportation.

In order to protect the rights to which they had been entitled for decades, individuals in this circumstance have been asked to provide documentation for every year that they’ve lived in the UK as proof of their long-term residency.

Glasgow SNP councillor Graham Campbell, whose mother came to England from Grenada in 1960, said the treatment of the Windrush Generation “shows that Britain still thinks it is an empire and has little if any respect for the Caribbean nations it ruthlessly exploited for 300 years.”

Campbell said that the problem had emerged due to “reactionary legislative changes made first by David Cameron then by Theresa May” with regards to immigration policy, which he said had, in effect, “made millions of public sector workers and private landlords into immigration officers”.

“The scope for racist discrimination was ripe – and it has now delivered on this. The Home Office is relishing the chance to meet that disgusting target of reducing migration to the ‘tens of thousands’ including throwing people out who belong here,” he said.

Widespread public outcry has led to assurances from the UK Government that those with the right to remain will be provided with support to meet these requirements, and a u-turn on holding a meeting with the Commonwealth high commissioners on the issue, which the government initially rejected.

However, Labour MP David Lammy, whose parents came to Britain from Guyana, said it was a “day of national shame” that it had taken so much time and pressure to force the government to act, and said the crisis had been a result of “far-right rhetoric” and the UK Government’s self-described “hostile environment” immigration policy.

“The Home Office is relishing the chance to meet that disgusting target of reducing migration to the ‘tens of thousands’ including throwing people out who belong here.” SNP councillor Graham Campbell

Campbell added that the government’s immigration policy amounted to “official state racism” and said it called to mind, on the 50th anniversary of Enoch Powell’s Rivers of Blood speech (which was controversially aired on 14 April on BBC radio 4), his view that Commonwealth citizens living in Britain are “somehow ‘not British’ and unable to be assimilated because of their ‘foreign culture’”.

Somynne also said that recent years had seen an upsurge in “English nationalism” of the kind seen when his siblings grew up in the Powell era – a response, he said to “the decline of the British state as a force in the world and the ideal of British liberalism”.

“Brexit has created an atmosphere and excuse to strike at a group of people always having to battle for recognition in British society,” he added. “But it’s a ticking box exercise for the British Government. They will work their way down the list targeting those with the least support in the public mind.”

Sir Geoff Palmer came to Britain from Jamaica in 1955, seven years after his mother arrived in the very same year as the Empire Windrush, but on a different ship. Palmer agreed that the policies which had led to the crisis facing the Windrush generation could not be regarded as a mere accident.

“Had it not been the 70th year of the Windrush,” he said, “this racial injustice would have been called unconscious bias.”

Palmer said that, even before the latest changes in immigration policy, Commonwealth migrants from this period faced questions over their rights to live in the UK. “I think it was when my mother had been here for 50 years, so around 1998, when she received a letter saying she was about to be deported if she didn’t fill in a form,” he said.

“The Caribbean has such a long history with Britain, we used to be called British subjects.” Sir Geoff Palmer

“She was living in England and I was in Scotland, so I went down to see her because she was concerned. I had to fill it in because she was rather confused about it. That was traumatic for her.

“I had to register in the 1970s as I went to represent the country abroad and I was stopped at the airport, and I was told I should register or they were going to put me out.”

The recent upturn in awareness of this issue, he said, was a result of the fact that people are being asked to prove their right to be here more and more often. “People here for 50 years now have the NHS checking if they’re British, or being told they’re not entitled to pensions – before that was never the case.”

“A lot of these people have got such a Britishness that they can’t imagine being deported – they get a form and they don’t think it can be applied to them.

Commonwealth leaders will meet with Prime Minister Theresa May on Tuesday to discuss a resolution to the issue during a visit to the UK for a Commonwealth Heads of Government Meeting.

Home Secretary Amber Rudd said she was “appalled” at the treatment of the Windrush generation by the Home Office she is responsible for, and admitted that people had been “deported in error” from the UK to the Caribbean nations.