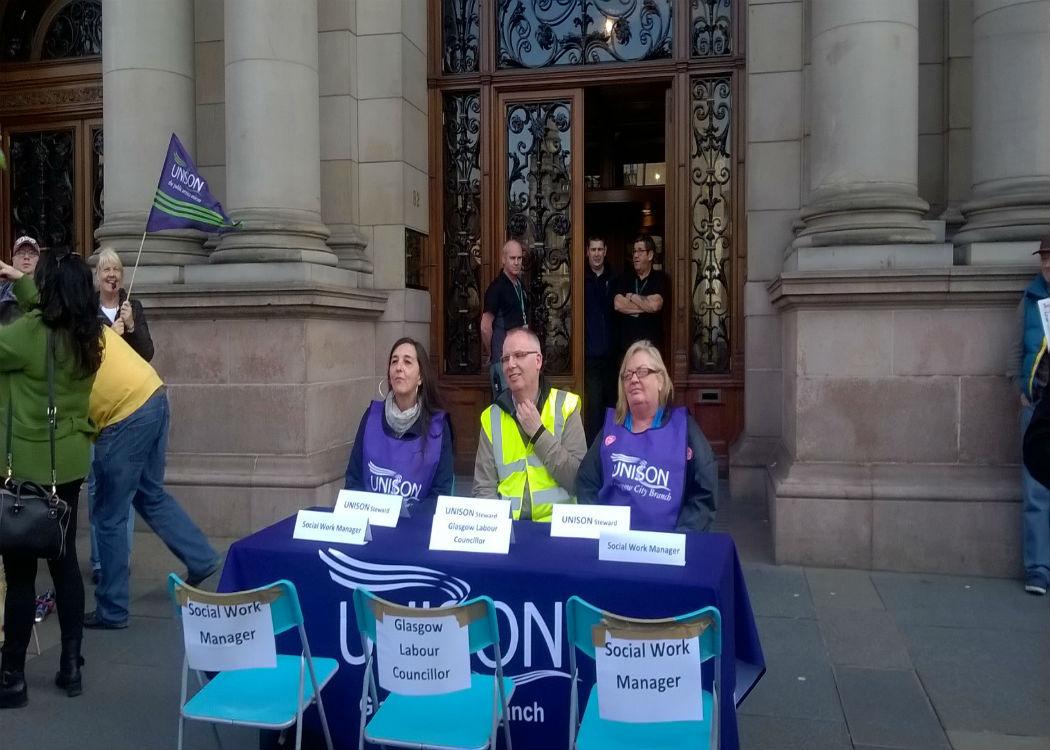 HOMELESS case workers who have been on indefinite strike for nine days marched to the Glasgow City Council’s city chambers demanding that councillors get round the negotiating table to find a resolution to the dispute.

The 70 workers believe that their pay grade does not match that of other workers in the council doing similar case work. They brought with them a negotiating table. Unison stewards sat on one side across from chairs for social work managers and Glasgow Labour councillors, to highlight claims that the council is ignoring the dispute.

“The job we do is very, very valuable, it is very, very important,” Fiona added. “We are staying here until we get the pay we deserve – we are united and we are not going anywhere.”

Stuart Graham, one of the strike leaders on the Southside of Glasgow, said that Glasgow City Council was “refusing to negotiate with us in the slightest”. He said that the council were paying a lot of money for bed and breakfasts for homeless people while the case workers were taking industrial action, but queried why the Labour council would rather pay money to break the strike than “pay workers what they are due”.

Eight-four per cent of members voted in favour of strike action on a 64 per cent turnout. Ninety per cent of all homeless case workers are in the union.

Michael Lavalette spoke at the rally as chair of the Social Work Action Metwork, a UK wide campaigning group for social worker rights.

Lavalette said: “Your fight, as far as we are concerned, is the most important struggle going on right now across the UK. 400 activists will be at our activist conference tomorrow in Paisley, and we are going to raise money there and do everything we can to give you support.”

A representative from a local Unison housing branch said they have donated PS1000 from the branch to support the workers strike fund, and Ian Leech, Unison Glasgow convenor for social work, said that trade union support had come in from as far afield as Turkey, Ireland, Greece and Spain for the striking workers, as well as across the UK.

“The strikers have been out since the 31 March over a re-grading claim; all they are looking for is parity with other staff members who are doing a similar job,” Leech told CommonSpace.

“So our message today to the council is to listen to these workers, and help resolve this dispute in the best interests of the vulnerable client group that our members work with.”

Leech said the council made it clear that they were not willing to discuss with the workers, but he said the strikers are not deterred.

“You can see that the strike is 100 per cent solid; all the workers are standing with each other. We’ve invited the council to come down today and sit round the table and discuss with us – but as you can see, the chairs are still empty.”

Leech said that the grading anomaly was down to the fact that the workers were previously part of the housing department before being moved to social work.

“They do a social work job, based on an assessment of people’s needs and case work, and therefore they should be on the same grade as staff who do that for children, families, people with addiction, older people who are all on a grade above,” Leech added.

Leech was unconcerned about taking strike action just a few weeks prior to the General Election, saying: “We’re here to protect our members, if that embarrasses the Labour council just before the election, then that’s the way it is.”

The workers had previously been taking action short of a strike since January.