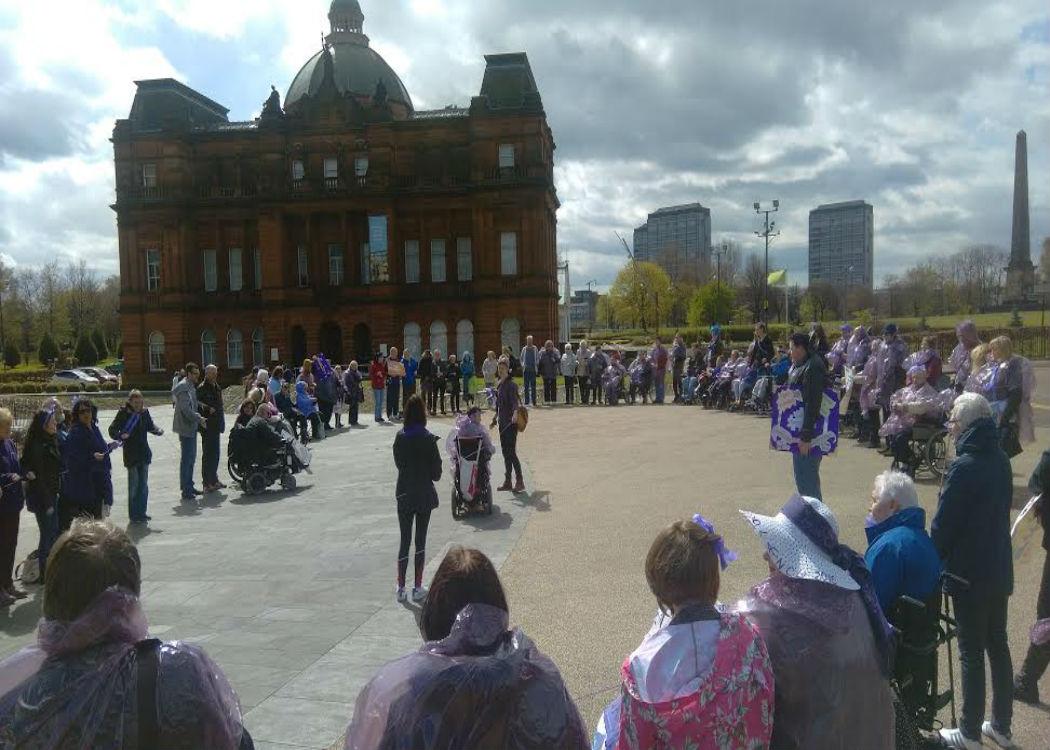 THE GLASGOW DISABILITY ALLIANCE (GDA) has launched a manifesto for equal participation in society for disabled people at a rally outside the People’s Palace in Glasgow Green.

The demands of campaigners at the rally, which was attended by more than 100 members of the disabled people-led group just over a week before the Scottish parliamentary elections on 5 May, included the implementation of newly devolved social security powers, the scrapping of the Community Care Charge which taxes care and greater government support for disabled people’s self-organisation.

Tressa Burke, chief executive of GDA told CommonSpace after the rally that progress was being made by the Scottish Government, but that there was more to achieve.

She said: “I think that a tremendous amount of progress is being made. That the Scottish Government has the powers for social security means there is a collective sigh of relief being breathed among disabled people.

Around 50 per cent of all cuts have fallen on the shoulders of disabled people according to GDA.

“It’s so different from what’s going on at Westminster, with their rightwing neo-liberal ideologies that have emerged over recent years. They have decimated disabled people’s lives.

“So people are hopeful. We see the press releases from the Scottish Government saying it’s going to be about equality and dignity. Now it’s time to see the action.”

Disabled people have suffered the brunt of cuts under both the Conservative/Liberal Democrat and Conservative government since 2010. Around 50 per cent of all cuts have fallen on the shoulders of disabled people according to GDA.

The Unison trade union estimates that by 2018 around three million disabled people will have lost more than PS28bn in cuts to benefits.

The rally included the singing of songs concerning the lived experience of disabled people and chants demanding rights for the disabled.

Bill Scott from Inclusion Scotland, the nationwide disability rights organisation, told the audience: “This is what we have to do if we want change. We have to unite together.”

The manifesto also calls for the rights that disabled people have by law, including international human rights law, to be made a social reality by Scotland’s political parties.

Chris Baird, a disability rights activist and member of GDA who addressed the rally, told CommonSpace: “Disabled people are guilty until proven innocent, we are made to justify our existence. We’ve seen people pushed to suicide, thousands of people have died under this current DWP regime.

“The time for talking is over, it’s now time for direct action.” Chris Baird

Baird warned that the failure of the Scotland’s political parties to act on disabled people’s demands would result in a campaign of direct action.

“As it stands I don’t think political parties are listening to the needs and concerns of disabled people and if they are listening the certainly aren’t doing anything.

“The time for talking is over, it’s now time for direct action,” he said.

GDA are holding their 2016 election hustings between 10am and 12pm on Friday 29 April at the Radisson Blu hotel in Glasgow. Confirmed speakers include Zara Kitson from the Green Party, Cat Boyd for the Rise leftwing alliance and Michael Shanks from Labour.

The full manifesto can be read here .