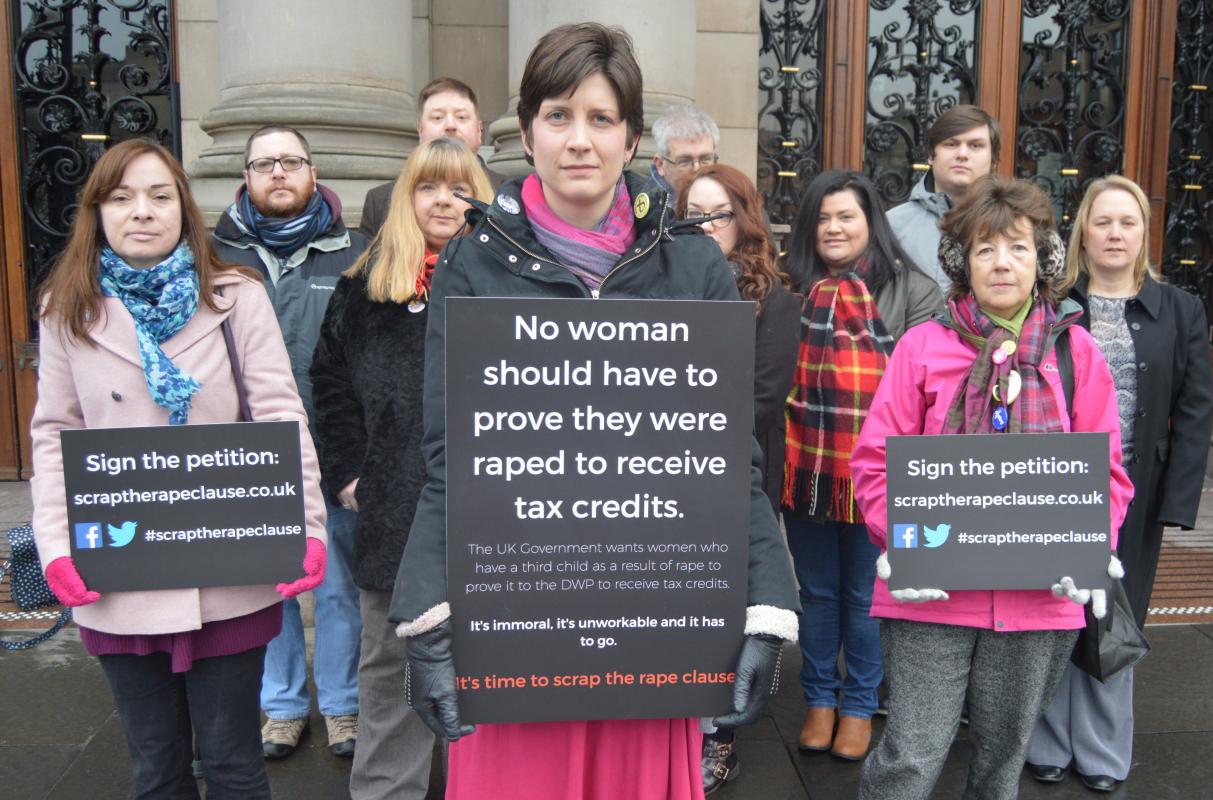 NEW ANALYSIS from the Institute for Public Policy Research released this week argues that a policy to recompense families in Scotland affected by the controversial Tory ‘Rape Clause’ and Benefit Cap would achieve more than the tax cut for low-earners included in the Scottish budget.

The independent progressive UK think tank has modelled the cost and effects of ending both the Benefit Cap and the Two-Child Limit (which features what is widely known as the ‘Rape Clause’) in Scotland, finding that doing so through local authority budgets and powers currently enjoyed would cost roughly £120m per year and bring 10,000 children and 5,000 adults in Scotland out of poverty.

The Rape Clause is an exception to the UK Government’s limitation on child tax credits to the first two children born into a family, announced in 2015 by then-Chancellor George Osborne, under which benefits could be claimed for children born as a result of rape.

However, the policy has faced widespread opposition due to the requirement that mothers would have to prove to the DWP that they had been victims of rape. While attending the Women in the World summit in April 2017, First Minister Nicola Sturgeon referred to the policy as “disgusting”.

The benefit cap, meanwhile, is a limit to the total amount of state benefits that those between 16 and 64 can claim.

IPPR Scotland director Russell Gunson commented on the new findings, saying: “The Scottish Government’s wider plans to increase income tax are necessary and welcome and will help to protect a range of public services from cuts for at least this year. However, the proposed tax cuts on lower earnings are poorly targeted and will have no impact on poverty rates.

“Effectively ending the Rape Clause and the Benefit Cap in Scotland could be possible using local authority powers and budgets, bringing 15,000 people out of poverty at a cost of £120m a year.

“Effectively ending the Rape Clause and the Benefit Cap in Scotland could be possible using local authority powers and budgets, bringing 15,000 people out of poverty at a cost of £120m a year.” IPPR Scotland director Russell Gunson

“These proposals could protect local authority budgets from proposed cuts, reverse some of the injustices of the UK benefits system, bring 15,000 people out of poverty in Scotland and, in doing so, reduce pressure on local services.”

Commenting on the new findings, SNP MP Alison Thewliss, a founder of the ‘Scrap the Rape Clause’ campaign group, told CommonSpace: “I have been pressing the UK Government on the pernicious two child policy and rape clause for over two years now. I wrote to the new Secretary of State at the Department for Work and Pensions, Esther McVey, urging her to rescind this vile policy, and I’m still waiting for a response.

“The Child Poverty Action Group (CPAG) have estimated that the two child policy is likely to force 200,000 children below the poverty line, and that families face a loss of up to £2,800 every year per child.

“In Glasgow, the benefit cap statistics make for grim reading – there are 636 households, and over 1,936 children directly affected by the changes. This has a direct impact on child poverty.

“The main problem in mitigating the rape clause is that it will leave women in the rest of the UK behind, and particularly those women in Northern Ireland, who still have no government in Stormont to speak for them.” SNP MP Alison Thewliss

Thewliss continued: “The main problem in mitigating the rape clause is that it will leave women in the rest of the UK behind, and particularly those women in Northern Ireland, who still have no government in Stormont to speak for them. The rape clause and the two child policy which underpins it is flawed in many ways and it must be scrapped entirely.

“The Scottish Government is having to work exceptionally hard to stem the flow of Tory cuts, for example through removing the financial burden of the Bedroom Tax. However, it is entirely unsustainable to continue to expect Scottish taxpayers to mitigate the effects of austerity; we should not pay twice for cruel Tory policies we did not vote for.

“The UK Government must listen to the overwhelming weight of opinion, recognise the consequences of its actions on child poverty, and revoke these cruel policies.”