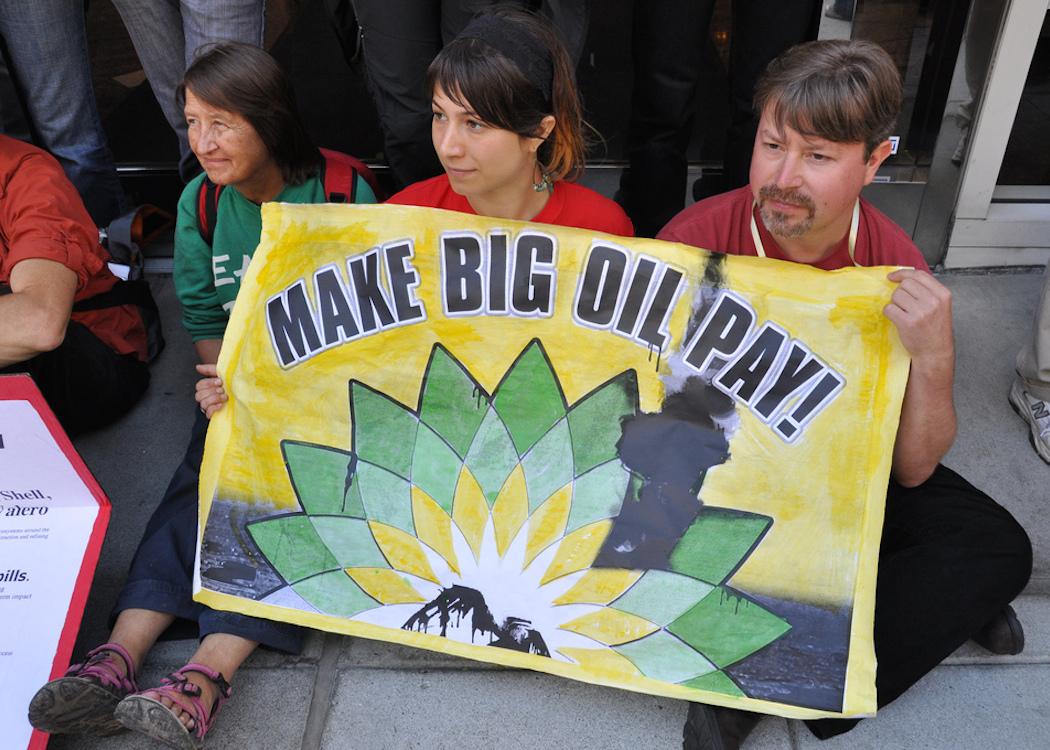 A SUBSIDIARY of the world’s largest oil company is in legal talks to claim a seven-figure sum of damages from the Scottish Government over a Glasgow pollution dispute.

Esso, a trading name of corporate giant ExxonMobil, has been accused of gigantic environmental hypocrisy for demanding environmental compensation for hazardous pollution on its Glasgow M74 site, while being complicit in various environmental atrocities itself .

The case, heard in the Court of Session, concluded with Esso and the Scottish Government now in talks, risks a multi-million fee for the taxpayer.

Esso, whose parent company is responsible for major oil spills and found guilty on various legal charges of environmental damage has been accused of being “one of the world’s biggest environmental criminals” exploiting a legal system that favours big business over communities harmed by pollution and toxic waste.

Patrick Harvie, Glasgow MSP and co-convenor of the Scottish Greens, told CommonSpace: “This case shows just how skewed the rules of the game are towards big business. The Greens spent years warning of the dangers to human health from the M74 project and its impact on contaminated land, but it’s sickening to see now that those being compensated are not local residents, but one of the world’s biggest environmental criminals.

“ExxonMobil is responsible for huge levels of pollution and contamination, and has pumped huge amounts of money into the climate denial industry.

“Whatever the outcome of this legal case, the Scottish people deserve to know the detail of this settlement – what went wrong, who is responsible and how much it will end up costing to the public purse.”

Exxon was responsible for oil spills at Baton Rouge, the Yellowstone River, Mayflower, Valdez and Greenpoint, among others, totalling over 27 million gallons of oil.

As a major oil profiteer – with $407bn of revenue in 2014 – Exxon has funded research to discredit climate change and continues to operate in nations with poor human rights and environmental records.

Land belonging to Esso has now suffered its own environmental pollution, as chemicals from the M74 motorway extension infected the land with hazardous chemicals on West Street, south Glasgow.

A legal opinion set down by Lord Tyre in the Court of Session found the Scottish Government responsible for the pollution, which had the “potential to create risk to human life”.

“It follows that, in my opinion, the first defenders [the Scottish Government] are not relieved of potential liability for damage to the pursuer’s land [Esso] caused by negligence or nuisance by virtue of having engaged the third defender [contractors] as an independent contractor and having instructed it to take appropriate and adequate precautionary measures,” Tyre found.

The legal parties in the case – the Scottish Government and corporate representatives – are now engaged in “discussion of further procedure”. Damage costs to the land were previously quoted at PS1.6m.

Exxon is the world’s largest oil refiner. The corporation was found responsible for the Valdez spill – when approximately 11 million gallons of oil spread along 2,100km of the Alaskan coast. Through legal channels, Exxon cut its financial liabilities for the spill by 90 per cent.

The company also denied culpability for the Greenpoint oil spill – but eventually settled a lawsuit to pay clean-up costs almost 100 years after the leak of between 17 and 30 million gallons of oil and petroleum products began.

It has been found responsible in court for various other scandals including the Longford gas exposition when two workers died, for using toxic MTBE in gas , over the financing of royalty payments , and killing birds .

The challenge from Esso follows previous corporate legal cases against the Scottish Government from large insurance, tobacco and alcohol companies.

A Transport Scotland spokesman said: “Transport Scotland, on behalf of Scottish Ministers, continue to rigorously defend the case. As this issue is subject to legal proceedings, we consider it inappropriate to comment further.”

A spokesperson for ExxonMobil said: “ExxonMobil takes its environmental responsibility seriously and is committed to operating in an environmentally responsible manner wherever we do business.

“We cannot comment further on the details of this case until the proceedings have been completed.”

The firm chose not to comment on apparent hypocricies over the company’s conduct.