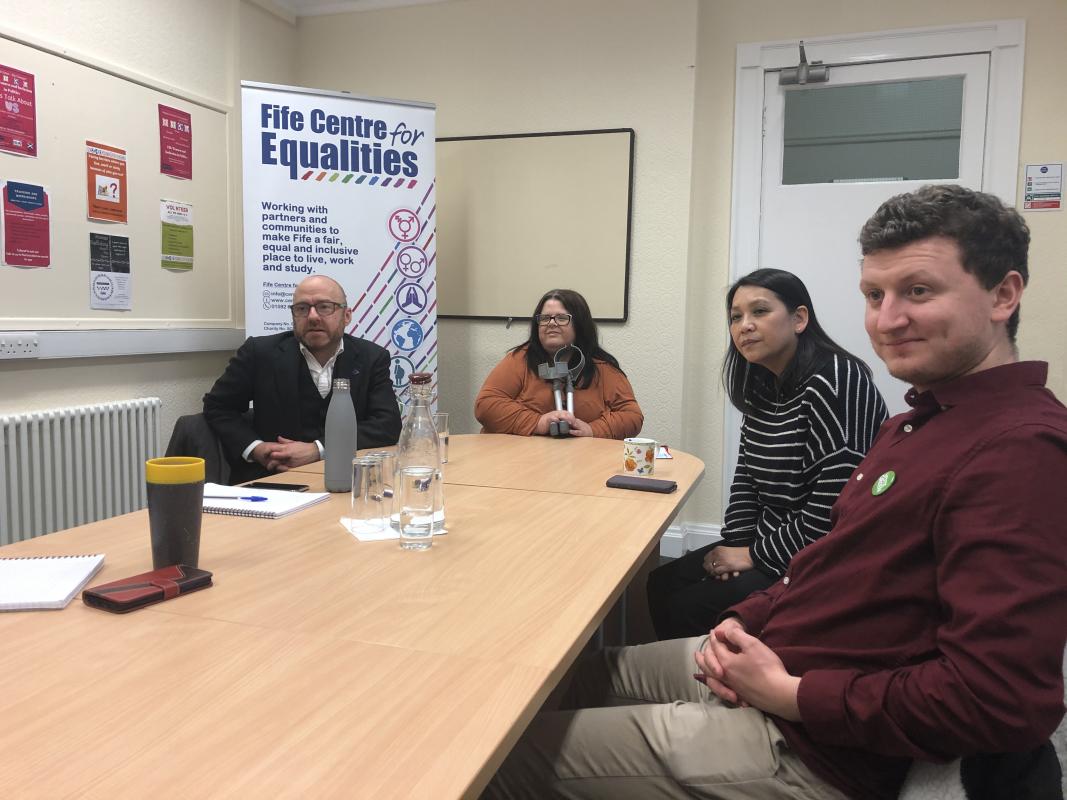 All 22 Scottish Green candidates in next week’s General Election have signed the Equality Network’s LGBTI Equality Pledge, while the party’s Women’s Network has launched the Green Women’s Pledge

SCOTTISH GREEN co-leader Patrick Harvie has argued greater efforts must be made to defend diversity and inclusion in the wake of Brexit and a General Election campaign “characterised by intolerance.”

Speaking during a visit to the Fife Centre for Equalities in Kirkcaldy today [5 December], Harvie highlighted the ongoing controversy surrounding Neale Hanvey, the former SNP candidate for Kirkcaldy and Cowdenbeath who was suspended last week following allegations of antisemitism, and argued that Hanvey could no longer be “a credible pro-equality MP”.

All 22 Scottish Green candidates in next week’s General Election have signed the Equality Network’s LGBTI Equality Pledge, which commits signatories to ensuring that equality and human rights protections are “maintained at least in line with evolving European standards” in the event of Brexit; defending the right of LGBTI people forced to flee persecution to asylum and freedom from arbitrary detention; opposing attempts to “roll back trans rights” and recognising trans people have been “historically marginalised and discriminated against”, and supporting the introduction of “effective protections” for intersex people’s human rights.

READ MORE: ‘The case for independence needs to be inclusive’: Patrick Harvie talks indyref2, the Climate Bill and Amazon fires at the Fringe

The Scottish Greens’ Women’s Network has also launched the Green Women’s Pledge, a declaration of recognition and support for the rights of all women including disabled women, women of colour, lesbian, bisexual and trans women.

Speaking today, Harvie said: “Looking at the sinister campaign and racist rhetoric from Nigel Farage and others, Brexit always has been about taking away rights and sowing division. We must not let that happen. We also need to resist attempts to split the equalities movement by those pretending trans people are a threat to women or wider society.

“Here in Fife it’s clear that the former SNP candidate, now suspended on grounds of antisemitism, cannot be a credible pro-equality MP for the Kirkcaldy and Cowdenbeath constituency. Anyone who opposes prejudice can vote for the Green candidate Scott Rutherford with confidence.

“To create a new Scotland that supports diversity and welcomes refugees and asylum seekers, we need to break with the UK’s direction of travel and look at international best practice. We need to ensure the European Convention on Human Rights and the European Social Charter are enshrined in UK and Scottish law.

“This General Election has been characterised by intolerance. A vote for the Scottish Greens sends a clear signal that diversity and inclusion should be celebrated and defended, now more than ever.”

Picture courtesy of the Scottish Greens