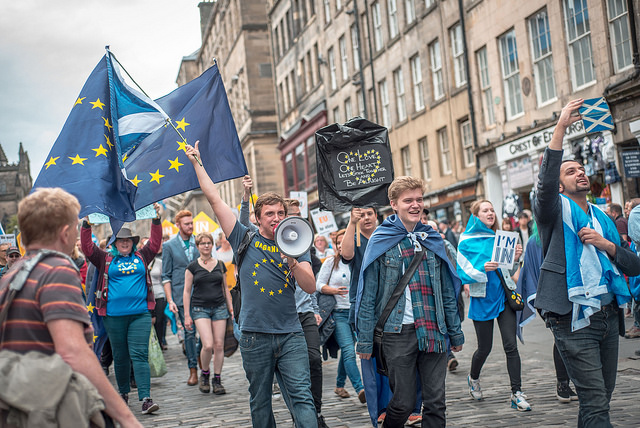 EU CITIZENS FOR AN INDEPENDENT SCOTLAND (EUCIS), a group representing politically active EU nationals living in Scotland, has come out condemning what it called the ‘PR stunt’ of Scottish Labour leader Kezia Dugdale over the issue of EU nationals’ rights.

The group has also dismissed the Labour leader for her continued opposition to a second independence referendum, citing it as a reason they will be advising their network of resident followers not to support the party.

This week Dugdale hit back at the Scottish Tories and their leader Ruth Davidson by suggesting that they could not be trusted to protect the EU rights of nationals living and working in Scotland.

Yet EUCIS has come out condemning both parties stating that Scottish Labour like its UK parent party has failed to vote consistently to defend EU nationals rights including those around stay, work, voting and legal.

“Let us be clear though: this is not just about OUR rights as non-UK EU nationals in this country.”

Despite claiming to be in favour of a Brexit negotiating strategy that would protect EU nationals the UK Labour party has come under criticism from opponents for its peers and MPs supporting the unamended Brexit bill passed at the end of March.

In a letter addressed to Kezia Dugdale, EUCIS said: “Seizing this chance of a publicity stunt on Europe Day doesn’t make you our champion. It makes you an opportunist.

“While EU nationals in Scotland take some comfort in the clear Remain vote here in 2016, we are dismayed that your address regarding our right to remain seems merely a token gesture, with no real conviction to back it up. Indeed, it has made you sound rather like your boss, Jeremy Corbyn – a reluctant “Remainer” throughout the past year, he has made mildly placating noises about our residence rights, but has yet to put much weight behind his words. Let us be clear though: this is not just about OUR rights as non-UK EU nationals in this country.”

The sentiment of the letter was shared by Ash Burnett, national coordinator for the group, who emphasised how much the rights of EU nationals and ‘new Scots’ were entwined with the rights of all Scots and the integrity of devolution within the context of European law.

She said: “It’s not just about the “right to stay” as is often being discussed by politicians, but rather all the other rights that go along with our EU membership at present.” In this Burnett refers to the Great Repeal Bill which the Tory UK Government seeks to rush through Westminister into law – that could end up in what legal scholars term “unprecedented levels of concentrated Henry VIII style powers”, threatening the Scottish Parliament as well as human and workers’ rights.

Theresa May’s position immediately after the referendum was that the status of the estimated three million EU nationals in the UK, like that of the 1.2 million Britons living in EU countries, would be factored “into negotiations”.

Labour leader in the Lord, Lady Smith, infamously drew criticism for saying that “continuing to oppose the government would be playing politics because MPs would not be persuaded to change their minds.”

A third of workers in UK industries such as retail, health, education, construction, forestry, insurance and shipping are from EU member states with currently 180,000 EU nationals residing in Scotland.

The letter added: “While the UK Government prepare their Great Repeal Bill, we in Scotland worry for the devolved Parliament, and Scottish Law, since so much of both are tied quite tightly into EU laws and regulations. We worry not just for ourselves and our fellow EU nationals in Scotland, but also for native Scots and new Scots alike, and the acquired rights all of us share as EU citizens.”