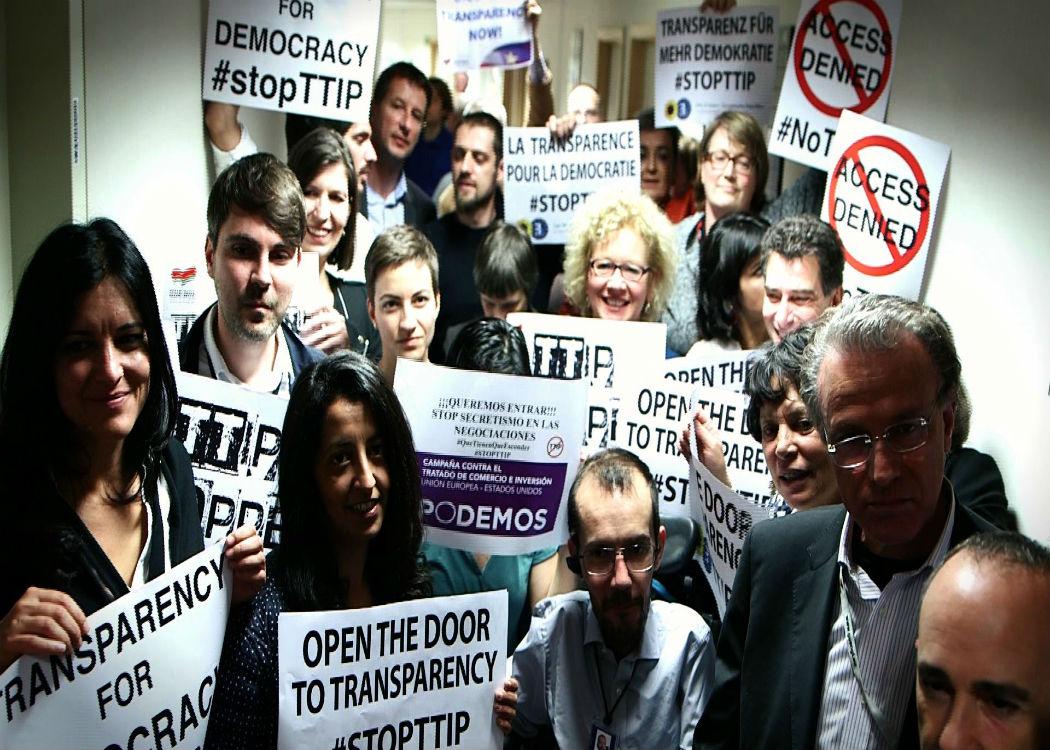 Manufacturing, energy and oil extraction also have no limits to “market access” under leaked TTIP “offer”

THE “initial offer” of the European Union to the United States in creating the biggest single market in the world, known as TTIP, contains no limits on market access to private universities, waste/water services and old people’s homes in the UK.

CommonSpace reported that the document had been leaked to the BBC, and it has now been made available on the BBC website for viewing.

CommonSpace analysis of the document confirms that the exemption of health services promised by Lord Livingston, UK Trade Minister, in a recent testimony to the Scottish Parliament appears to be in the offer to the US.

However, some noticeable areas where there appears to be no restriction on “market access” include water/waste services, old people’s homes and private universities issuing diplomas.

For universities, only Italy has an exemption in place. The document states: “The right is reserved to request that only Italian juridical persons may be authorised to issues state-recognised diplomas.”

As no such exemption exists for the UK, US style private universities could be introduced into the Scottish education system, capable of issuing diplomas to students.

There may be room for interpretation, as the document states “The EU reserves the right to adopt or maintain any measure with regard to privately funded other education services.” However, the specific exemption of the Italian’s would suggest that, for those that have not sought an exemption on diplomas, there are no restrictions in place.

In water/waste services, there is no restrictions whatsoever on contracting. Therefore US companies would be entitled to bid for water contracts in Scotland.

CommonSpace reported that the Scottish Government is likely to have signalled Anglian Water, a private company in England known to have avoided tax, as its preferred water contractor instead of Business Stream, a company who currently operate water services for public-sector organisations that is 100 per cent owned by Scottish Water (a publicly owned organisation).

However, the document states that: “Services considered as public utilities at a national or local level may be subject to public monopolies or to exclusive rights granted to private operators.” In a footnote, a list is provided of potential services this could include, like environmental services and R & D, but it does not include water & waster services, nor voluntary and third sector services, which are not mentioned at all in the whole document. Therefore this could be open to interpretation.

In social services, the leaked document says restrictions would remain in place for everything except “privately-funded convalescent and rest houses and old people’s homes.”

While private elderly care exists in Scotland already, companies, including potentially from the US, would be opened up to US regulation.

On health services, the document states that: “The EU reserves the right to adopt or maintain any measure with regard to the provision of all health services which receive public funding or State support in any form.”

For private funded health services, there’s no limit to market access for private ambulances and “residential health facilities other than hospital services”, as well as dental services, private pyschologists and private midwifery. The pharmaceutical industry would also be opened up to US companies.

In manufacturing, mining, oil extraction, energy and gas production there is no restrictions on market access, opening up these markets to US competition.

And did you think we have enough market research and opinion polling companies? Well US companies could be on their way, as there’s no limitations on market access to that either.

Alison Johnstone, Greens MSP, responded to the leaking of the TTIP document by stating: “While some want to quibble over the wording, that is a distraction compared to the broader purpose of the deal. Greens have consistently opposed this blatant corporate power grab.

“It’s undemocratic and threatens not just our NHS but puts at risk jobs and wages throughout our economy.”

If TTIP (Trans-Atlantic Trade and Investment Partnership) were to be passed by the EU Parliament and ratified by EU member states it would represent the biggest bilateral trade agreement in history, creating a single market across the Atlantic.

The People’s NHS campaign lobbied the Scottish Parliament as the UK Trade Minister gave evidence to the European and External Relations Committee. The campaign wanted the Trade Minister to commit to an explicit veto of the NHS in TTIP, a call supported by the SNP, Scottish Labour and the Scottish Greens.