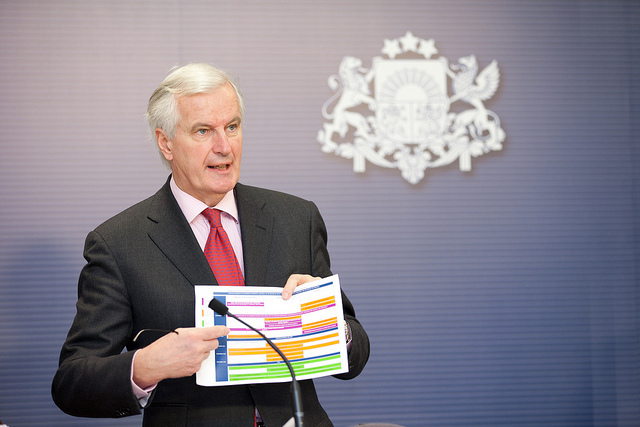 THE EUROPEAN Union thinks Northern Ireland should have a separate Brexit deal from the rest of the UK.

The Guardian reports that Barnier will demand a “unique solution” to the prospect of a border between Northern Ireland and the Republic, that will be the frontier of the EU when the UK leaves next year.

“There needs to be a political commitment to protecting the Good Friday agreement.” EU Brexit paper

Reports say documents will demand people be allowed to go to work, school or receive medical treatment both sides of any potential border.

The second paper to be leaked to the newspaper in days states: “There needs to be a political commitment to protecting the Good Friday agreement.”

The document says: “The onus to present solutions which overcome the challenges created on the island of Ireland by the United Kingdom’s withdrawal from the European Union and its decision to leave the customs union and the internal market remains on the United Kingdom.”

Politicians in Ireland want to avoid a hard border, for fear of separation issues that were heightened during the Troubles.

The leaked EU Brexit document comes after Barnier agreed to meet the Scottish Parliament’s European Commission for an update on how negotiations with the UK Government are going.

Barnier met First Minister Nicola Sturgeon in July of this year, despite Scotland and Wales being denied any input into Brexit negotiations by the UK Government.

“This gives us a chance to hear first-hand about the progress of the negotiations and the respective positions of the EU and the UK.” Joan McAlpine MSP

Speaking to STV, SNP MSP Joan McAlpine said: “This gives us a chance to hear first-hand about the progress of the negotiations and the respective positions of the EU and the UK.

“This meeting is a testament to the openness and transparency with which the European Commission is approaching the withdrawal negotiations.”

The SNP called for Scotland and Wales to be granted a voice during negotiations.

Scottish and Welsh Governments were refused an emergency debate in the House of Commons on the issue earlier this week.

“The outcome of the Brexit negotiations will have a huge impact on Scotland’s economy, industries, and communities for years to come.” Peter Grant MP

SNP MP Peter Grant  said: “It is deeply disappointing that the Westminster parliament has once again stuck its head in the sand and refused to listen to the concerns of the devolved nations on the Brexit negotiations.

“The outcome of the Brexit negotiations will have a huge impact on Scotland’s economy, industries, and communities for years to come – with the potential to cost Scotland 80,000 jobs and £11.2billion a year.

Grant said Scotland’s Single Market membership being under threat could cost “thousands” of jobs and added that EU nationals were worried about their future rights.

He said: “The minority Tory government must reach out and seek consensus – refusing to engage or consult undermines our democracy and the constitutional rights of the devolved administrations.”