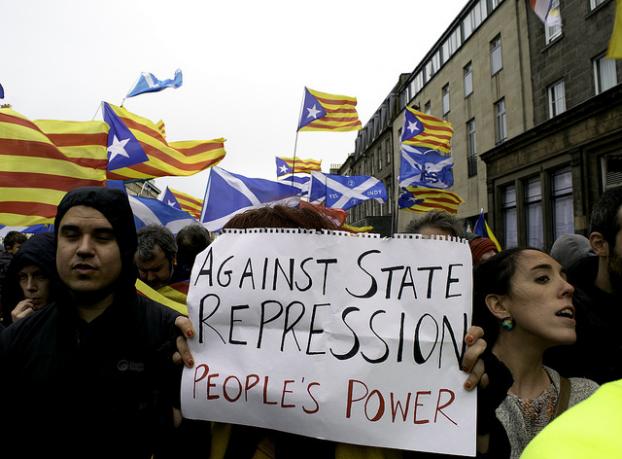 THE EUROPEAN Commission has been facing widespread criticism over its response to the scenes of violence in Catalonia, where Spanish police forces injured almost 900 Catalan voters on Sunday.

During opening remarks of a parliamentary debate on the matter, the European Commission’s deputy head, Frans Timmermans, did emphasise the need for an open dialogue stating “it’s time to talk”.

Yet, while the First Vice President said Sunday’s violent scenes were “saddening”, he stated that “proportionate use of force” is sometimes required.

Timmermans said: “It is a duty for any government to uphold the rule of law, and this sometimes requires the proportionate use of force… Respect for the rule of law is not optional – it’s fundamental.”

“It is a duty for any government to uphold the rule of law, and this sometimes requires the proportionate use of force.” Frans Timmermans, European Commission First Vice President

In the debate that followed the Commission faced heavy criticism. Irish MEP Matt Carthy (Sinn Fein) said: “We are told the EU stands for peace, democracy and human rights. Where were those values on Sunday?

“If you dare to use the council meeting to talk about peace or democracy without standing clearly for those values in Catalonia then the people of Europe – the people of the world – will rightly consider you to be nothing more than a shower of hypocrites.”

.@mattcarthy delivers a passionate speech on Catalonia and the EU's silence on the Spanish attack on democracy.#CatalanReferendum pic.twitter.com/kyZ13S8eJc

The European People’s Party – the largest political group in the European Parliament, which includes Spanish Prime Minister Mariano Rajoy’s Popular Party – stood by the line that the Catalan Government had gone against the rule of law.

Martina Anderson, an Irish MEP for Sinn Fein told CommonSpace that what happened in Catalonia on Sunday was “an affront to democracy”.

Highlighting the fact that many European articles – such as Article 2 of the European Convention on Human Rights – are founded on the values of respect for human dignity and freedom of democracy, Anderson said:

“What kind of democracy – particularly an EU member state – attacks its citizens for wanting to vote? What kind of democracy steals votes and attacks polling stations? What happened on Sunday was shameful and disgraceful, and without doubt, the [European] Commission’s response has been utterly hypocritical.”

The Catalan Government has called for a regional parliamentary session to be held on Monday, with government sources suggesting that – depending on how that session goes – independence could be called the same day.

In anticipation of a declaration of independence on Monday, a solidarity march has been organised in Glasgow by Scotland’s Radical Independence Campaign.

On Monday we will march from George Sq to La Pasionaria to stand with #Catalonia: https://t.co/mCfN3FnqTp

Many in the international community are calling for open dialogue and mediation.

In response to comments by Belgian MEP Philippe Lamberts, comparing the actions of the Spanish Government in Catalonia to those of the British Government in Northern Ireland, Martina Anderson said:

“The British Government sent in the army, after that the rest is history, it took 40 years of a conflict and tension and the Good Friday agreement to try to bring us out of that terrible place we ended up in.

“So you would think that Europe has lessons to learn – particularly when it looks at Ireland, and particularly in the context of Brexit, because they are recognising the value of the Good Friday agreement to the peace process. Let’s not have what happened in Ireland be reflected in the approach that is going to be taken by the Spanish state with regards Catalonia”

“Let’s not have what happened in Ireland be reflected in the approach that is going to be taken by the Spanish state.” Martina Anderson MEP.

Anderson also called for external mediation, condemning the European Commissions deference to the Spanish Government in calling the situation an “internal matter”.

In response to the announcement on Wednesday that the Spanish High Court will now be investigating key Catalan figures on suspicion of sedition and inciting rebellion against the state, Anderson said of the European Commission: “If this was happening in Hungary of Poland we would have been hearing a different response. If it was happening in Venezuela, if it was happening anywhere else.

“The utter hypocrisy of this place is disgusting and shameful. There’s certainly a need to get mediation. But to say to the Spanish government that it is an internal matter for it to resolve they now have demonstrated that they are a participant in the problem that the Catalans were subjected to on Sunday, and therefore they can’t be the people that will bring about a solution.”