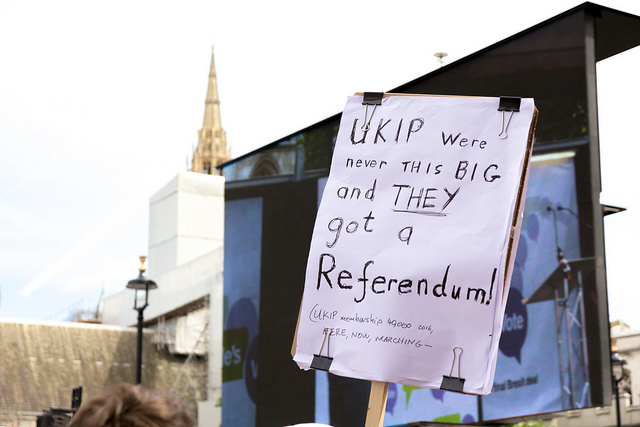 FOLLOWING SNP Westminster leader Ian Blackford’s remarks on Monday (25 June) that the SNP keeps an “open ear” and is “not diametrically opposed” to the possibility of a second UK-wide EU referendum, Scottish Europhile activists sensed an opportunity, while Eurosceptic SNP supporters warned of the dangers.

Blackford’s comments, while noncommittal, seemed to hint at the potential for the SNP to lend its support to a future EU referendum in the right circumstances, and appeared to be the general leadership line as Scottish Brexit Minister Mike Russell stated on the Sunday Politics Show that he was “not hostile” to what supporters have dubbed a ‘People’s vote’ on .

This comes after a London rally saw around 100,000 people march in support of the People’s vote. While the Green Party of England & Wales and Liberal Democrats support the proposal, the SNP has generally focussed on securing what it regards as the best Brexit deal for Scotland and maintaining that it would seek re-entry into the EU if Scotland became independent.

Speaking to the Press Association, Blackford said: “Our priority is to make sure that we can stay in the single market and the customs union.

“We haven’t been arguing for a second EU referendum, we’re of course watching developments as far as that is concerned. We’re not in all circumstances diametrically opposed to that – we have an open ear to developments on that front – but for us it’s the priority of staying in the single market and the customs union that’s most important.”

Responding to the comments, Ellen Höfer of EU Citizens for an Independent Scotland said that the campaign group “absolutely believes in giving citizens and residents of the UK another opportunity to vote on whether they wish to leave the EU or not”.

READ MORE: Siobhan Tolland: Everything I know about history tells me Scotland’s next chapter will be independence

“EU citizens (and our EU-based UK counterparts) are most immediately affected and the loss of our democratic rights is in blatant violation of the Human Rights Act,” she said.

Höfer said that if a second referendum resulted in different outcomes between Scotland and other parts of the UK, as in the 2016 referendum, this “must be recognised”.

However, she added: “We believe all of the UK will suffer equally, if not more disastrous consequences through Brexit, not least of all along the Irish border.

“While Independence remains the only sustainable future for Scotland, we cannot stand by in silence as our neighbouring countries are heading for self-destruction. Scotland’s powerful, passionate grassroots ‘commEUnity’ sets an example for both UK and the rest of Europe: You are the people. You drive the change you want to see in the world.”

Blackford argued that if the UK leaves the single market and customs union, this would result in a “massive threat” to the economy, presenting “a clear road map towards a second independence referendum”.

“That, for me, would be the priority,” he said, adding that the party “will only come back to a discussion on the timing of a [independence] referendum once we’ve got through the Brexit process”.

READ MORE: Aberdeen Independence Movement: The chaos in the Commons shows Scotland will never be equal in the UK

“Given the damage we now know of as a result of Brexit, we think it’s right that people have a vote on the deal that the government comes back with or doesn’t come back with.

“People need to have the final say – we can’t leave it to a stitch up in parliament. We can’t trust the people in parliament to act in people’s interests – they’ll act in the interests of their party.”

In contrast, Marty Smith, co-founder of Autonomy, a Eurosceptic SNP group, dismissed the campaign for a People’s Vote, backed by the youth-led campaign group Our Future, Our Choice, as “a movement led by Labour activists”.

“The core principle of this campaign is to frustrate the outcome of the EU referendum. They believe that if a referendum comes back and says people reject the deal, that will give the momentum for a second EU referendum and achieve a different result,” Smith argued.

Instead, Smith said the SNP should drop altogether its commitment to re-joining the EU, an institution he described as “anti-democratic, anti-environmentalist, and anti-human rights”.

Smith said that adopting a clear position on Scotland’s international relationships will be necessary during a future independence referendum and can’t, as Stewart Maxwell, special advisor to First Minister Nicola Sturgeon, recently suggested, be left until after the vote.

While Smith views a repeat of the EU referendum as “undermining democracy”, he said that there was a much stronger case for a second independence vote.

He said: “We have gone through a transition period from losing the independence referendum to continually voting for pro-independence parties at elections. We propose that this means the Scottish people have an appetite for independence.

“Scotland voted to remain, and while that shows that we have a democratic deficit in the UK, across the UK parties ran on manifestos that talked about Brexit, and people voted for those policies.”

Views on what Brexit should ultimately look like also differ within the main UK parties, with at least 50 Conservative MPs reportedly prepared to block a “no-deal” Brexit if the government seeks to leave the EU on this basis.

Meanwhile, Laura Smith MP resigned from Labour’s shadow cabinet earlier this month over her opposition to the leadership’s position on UK membership of the European Economic Area (EEA). While MPs were ordered to abstain on a vote on the subject, 75 backbenchers rebelled to vote for the EEA, and 15 voted against it.

Scottish Conservative constitution spokesman Adam Tomkins responded to Ian Blackford’s comments: “The SNP’s only priority throughout Brexit has been to frustrate the process, so it’s no wonder they’re suggesting nonsense like this.

“They need to understand that you can’t simply re-run a referendum simply because you don’t like the outcome of it. Most Scots simply want us to get on with Brexit and for the Scottish Government to work with the UK Government to get the best possible deal.”