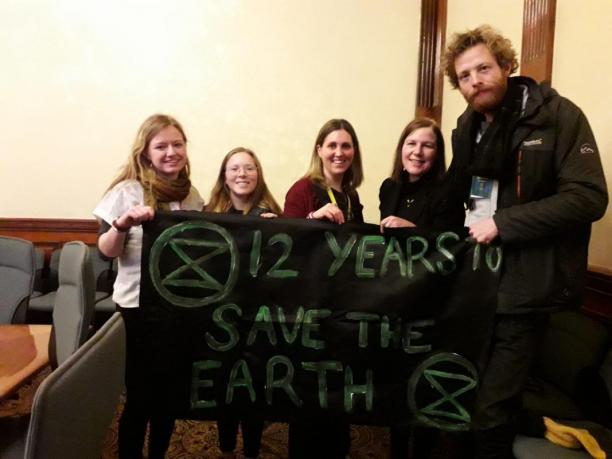 Eva Schonveld, Extinction Rebellion Scotland activist and campaign coordinator for a Climate Citizens’ Assembly, says that if the Scottish Government can hold a Citizens’ Assembly on the constitution, it can also hold one on the climate and ecological crisis

NICOLA STURGEON’S announcement that the Scottish Government are to hold a Citizens’ Assembly on the future of Scotland is to be warmly welcomed. This innovative model for deliberative democracy, used in the Republic of Ireland to deal with abortion law, shows that another way of doing politics is possible. And a new type of politics is desperately needed.

Effective action on climate change is the single most important issue in considering Scotland’s future. Without it, all the rest is like rearranging deck chairs on the Titanic.

Extinction Rebellion see Citizens’ Assemblies as part of the solution to politicians’ reticence to take the urgent action necessary to effectively tackle climate change. That is why we will be launching an appeal for a Scottish Climate Citizens’ Assembly (CCA) this June.

While there is genuine uncertainty on exactly how climate change is going to pan out, and what impacts and complex interactions different attempts to mitigate it may have, it is crystal clear according to the most recent report from the Intergovernmental Panel on Climate Change (IPCC) that governmental action so far has been neither timely nor serious enough. Emissions still rise. The actions governments have signed up to under the Paris agreement, are still very likely to take us over 3° of warming – well over the 2° limit which the has been deemed relatively safe.

Increasingly people are growing more concerned about the weird weather and the dire predictions from the IPCC. Meanwhile, why have so many of the real-world findings over past years correlated to the IPCC’s ‘worst case scenario? Why, if it’s as serious as we’re being told, are our governments so slow to make the changes needed to turn our economies away from fossil fuels? Extinction Rebellion, like the School Climate Strikes, is an expression of this growing concern.

The difference between climate change and any other issue is that it will eventually impact every single one of us. Growing public awareness that the crisis is both truly existential and accelerating needs to spark the serious changes that movements like Extinction Rebellion are calling for.

Action on climate change will affect each and every one of us. The difficult decisions on how to tackle this crisis can no longer remain in the hands of the politicians, but need to be decided by the people.

Contentious decisions made by governments can leave people feeling left behind, which can turn into society wide rifts between families, friends and coworkers – as seen with Brexit and the Independence referendum. In contrast, a Citizens’ Assembly speaks for society as a whole, it is a truly representative group chosen from the general public and so able to make a representative decision. But our Climate Citizens’ Assembly must have teeth, and the government must hand over power to the people, not simply use it as yet another consultation which is not listened to when the advice is hard to swallow.

The evidence from Citizens Assemblies in Ireland, Canada and Australia is that – given good facilitation, evidence from experts, and time to think collaboratively – a Citizens’ Assembly can enable ordinary people to consider the evidence and come up with meaningful proposals. In this case we believe that such a Citizens Assembly can decide on the best mechanisms through which we can rapidly decarbonise in a way that  is far more ambitious and effective than any government has yet  proposed or carried out.

Following Nicola Sturgeon’s landmark announcement on Wednesday [24 April] that the Scottish Government will set up a Citizens’ Assembly to make a decision on IndyRef2, we call on the Government to establish a Climate Citizens’ Assembly (CCA). Our appeal is already bubbling, well before it has been launched, with support from Friends of the Earth Scotland, Common Weal and Global Justice Now as well as individuals like Tom Devine and George Monbiot.

Such a CCA can consider a way through the climate crisis and ecological collapse we are facing, and come up with policy recommendations for the most rapid decarbonisation programme possible. It can do this in a way that seems to be electorally impossible for our politicians. In doing so Scotland would pilot a model of courageous governance and effective action on the defining issue of our time which could inspire other countries to also take action, in just the same way that Greta Thunberg has inspired a generation into unprecedented action.

You can read the Declaration calling on the Scottish government to create a CCA here. After we launch in June we’ll be looking for widespread backing from the Scottish public and organisations.

READ MORE: How democracy could be better off without elections – and why Scotland might be well placed to prove it

If you want to get involved with Extinction Rebellion Scotland’s call for a CCA you can: