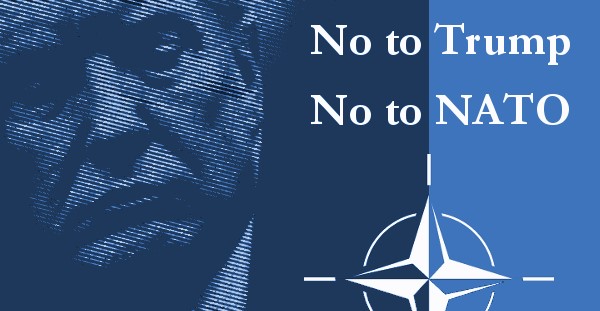 With a Nato summit in London scheduled shortly before the General Election, the Edinburgh Stop the War Coalition argue that the UK’s ongoing membership of the nuclear military alliance should be at the forefront of voters’ minds

DONALD Trump will be back in London just a week before the General Election, meeting up with Boris Johnson, Recep Tayyip Erdoğan and other heads of state at the Nato summit. The event marks the 70th anniversary of the North Atlantic Treaty Organisation, the world’s largest nuclear-armed military alliance.

No doubt Johnson will be looking forward to meeting up with Trump again, but the event may not provide the platform that he’d like. Nato is an organisation that is increasingly dysfunctional and under pressure. Most recently, France’s President Macron has described the organisation as ‘brain dead’. In just one recent example of its disarray, Turkey, a strategically important Nato member, took unilateral action in invading Northern Syria following a US withdrawal that was made without consultation with NATO partners.

Ever since he took office Trump has been bullying member states to increase their contributions to the Nato budget to above two per cent of GDP. This will be top of his agenda in London. To avoid bringing the tensions in the organisation into the open, every effort is being made to keep the agenda as brief as possible. Some of the discussion is being held at a luxury hotel and golf resort as distant from the centre of London as it’s possible to be while remaining inside the M25 ring. Nato hopes to keep the disagreements away from public gaze and to avoid public protest.

READ MORE: Analysis: The Trident and Nato debate is back in the SNP – it should never have gone away

However, Nato leaders remain nervous about Trump. At the Brussels summit last year, only five member-states had hit the two per cent budget contribution he demands and with no prior discussion he upped the ante by demanding four per cent. They also know that there will be a major demonstration on the 3 December organised by CND, Stop the War Coalition and others.

Nato has been largely absent from discussion and debate around the General Election, yet it has a critical impact on our future. As an alliance it has played a central role in the military interventions that the UK has initiated or supported in the last two decades. It sucks taxes and resources into military spending and support for the arms industry.

These resources and the skills of the workers in the defence sector will be essential to support a rapid transition to a decarbonised economy. Rather than provide ‘security’, the Nato alliance has been a primary driver of conflict in Europe and around the world.

Perhaps most importantly, in the Scottish context, Nato is a nuclear alliance and refuses to rule out the first strike use of nuclear weapons. The UK’s nuclear weapons, principally based on the west coast, have been assigned to Nato since the 1960s.

This means, in effect, that we are at the mercy of US policy decisions and on the front line of any potential nuclear conflict. Sadly, while the SNP and Labour differ over Trident, both back continued NATO membership.

Scottish peace and anti-war organisations are organising simultaneous protests against the NATO summit in solidarity with those demonstrating in London. More details can be found here.

Picture courtesy of the Edinburgh Stop the War Coalition