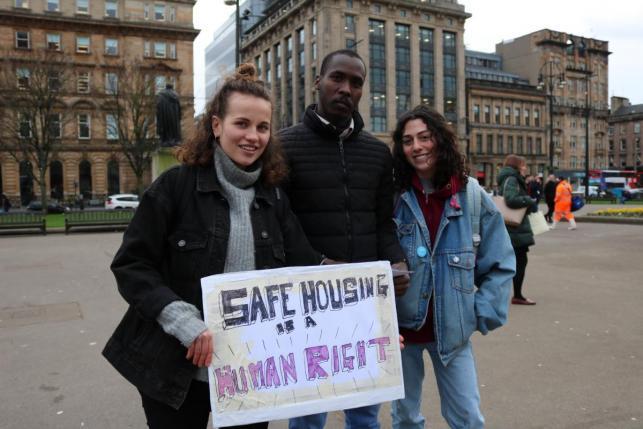 CHARITIES, campaign groups, politicians and housing organisations have joined in a last-ditch attempt to prevent the lock-change eviction of hundreds of people in Glasgow.

Over the past week, a number of interdict orders have prevented in the eviction of several individuals that have already been served with notices, with more to be heard on behalf of Legal Services Agency, Shelter Scotland, Latta & Co and the Govan Law Centre. The lawyers involved have increased their offer of assistance to ensure that anyone who is at risk of a lock change is able to seek urgent legal advice.

Mike Dailly, Principal Solicitor at Govan Law Centre, which is pursuing an Appeal in the Court of Session, commented: “As of today we secured an expedited timetable for the Inner House of the Court of Session to examine the legality of lock change evictions in Glasgow – an opportunity which neither Serco or the Home Office oppose. It would be sensible for Serco to put lock change evictions on hold pending a legally binding and authoritative ruling in Scotland. The failure to do so will necessitate hundreds of interdict actions by law centres and housing charities in Scotland”.

Jalal Chaudry, Associate at the human rights law firm Latta & Co. Solicitors, added: “Asylum seekers arrive in the United Kingdom seeking protection from the UK government. Public authorities such as Serco, who are replacing central government in providing asylum accommodation, are well aware of that asylum seekers are at an enhanced risk of vulnerability and exploitation such that their human rights are likely to be breached by what Serco propose.

“The practice of lock-changes, in this context, averts the provision of adequate procedural safeguards to protect the asylum seeking population. We consider that as a matter of principle, Article 8 ECHR requires any person who is at risk of being dispossessed of his home at the suit of a public authority, to have the right to raise the question of the proportionality of the dispossession, and to have that question determined by an independent tribunal. We consider that this right should arise even where the right of occupation under domestic law has come to an end.

“The UK Government must live up to its responsibilities and step in – instead of letting an asylum accommodation provider deal with the inevitable results of an utterly flawed system.” SNP MSP Sandra White

“We have sought clarification of the law by way of Judicial Review against the ‘lock-change policy’. We consider that Serco, Compass, and the Home Office have failed to discharge the ‘Public Sector Equality Duty’, which requires public authorities to have due regard, among other things, to the need to advance equality of opportunity between persons who share a ‘relevant protected characteristic’ such as disability, and persons who do not share such a characteristic.

“Serco have resisted the Judicial Review and delayed the law being properly tested in this area. Serco’s move to delay the challenge is on the basis of seeking to avoid expense pending a decision in the Inner House in the related, yet distinct, case of Ali v Serco. The law is yet to be fully clarified, yet Serco are proceeding to serve ‘lock-change notices’ on people with disabilities. Serco’s approach is inconsistent, and causing a huge burden on the public purse, given individuals are being forced to raise individual interdict actions.”

SNP MSP Sandra White, one of several politicians who has spoken out against Serco, commented on the looming evictions: “These planned lock-changing evictions are wholly unacceptable, widely condemned by front-line charities and could force a number of already vulnerable people into homelessness and destitution.

“Every person has the human right to housing. This means having access to a safe and habitable place to live, not being subjected to lock-changes and forced evictions.

“The deadline for these evictions is looming, but the silence from the Home Office on this matter has been absolutely deafening. The UK Government must live up to its responsibilities and step in – instead of letting an asylum accommodation provider deal with the inevitable results of an utterly flawed system.

“This completely immoral and inhumane lock-change and eviction programme must be stopped, with immediate effect.”

With the deadline approaching for the first batch of evictions, a wide-ranging coalition of charities have reiterated their condemnation of Serco’s plans, and demanded an end to the actions until the legality of this kind of eviction is clarified.

The group ‘Stop Lock Change Evictions Scotland’ have argued that asylum seekers’ human rights are being threatened by Serco’s proposed eviction by lock-change. The organisation are calling for a wholesale reform of the manner in which the Home Office treats those who are refused asylum by the UK. The coalition includes the Refugee Survival Trust, the Scottish Refugee Council, the W-ASH Project, the Govan Community Project, Just Rights Scotland and Shelter Scotland.

Additionally, the Scottish tenants’ union Living Rent yesterday [10 July] delivered letters to a number of Glasgow-based Registered Social Landlords (RSL), listing actions intended to put pressure on Serco and the Mears group – which will be taking over Serco’s Home Office contracts in September – to prevent the evictions taking place.

In an open letter, Living Rent stated: “Last summer, many housing associations took a stand to oppose Serco. We are hoping that you will act again to put pressure on Mears to take on the tenancies and house anyone seeking asylum in their properties until a resolution is found.”

The union is asking housing associations to guarantee not to allow Serco or Mears to change the locks on their properties; publicly pledge to withdraw from any contracts with Mears as soon as possible; and commit not to enter into any future contracts with Mears if it refuses to take on the properties in question from Serco.

Both the Scottish Federation of Housing Associations (SFHA) and the Glasgow and West of Scotland Housing Forum (GWSF) have put out responses to the union’s demands, which “understand and welcome the concerns expressed by Living Rent”, but claim that their members cannot directly intervene in contractual matters.

Living Rent said it met with Mears CEO John Taylor and transition manager Angela McLachlan earlier in the week, and were told that Mears is “contractually unable” to take on the properties of those being evicted. As a result, Living Rent suspect that Mears is “forcing Serco to proceed” with the evictions.

A spokesperson for Mears told Scottish Housing News: “Mears have met with Living Rent to listen to their concerns. We have explained that when Mears take on the contract in September, we will only be responsible for service users who are still entitled to asylum support and not for those who are no longer eligible for support. The issues regarding individuals who no longer have a legal basis for support are for the Home Office and the current contractor to address. In terms of properties, we are engaging with all landlords in Glasgow and our objective is to retain existing stock where possible.”