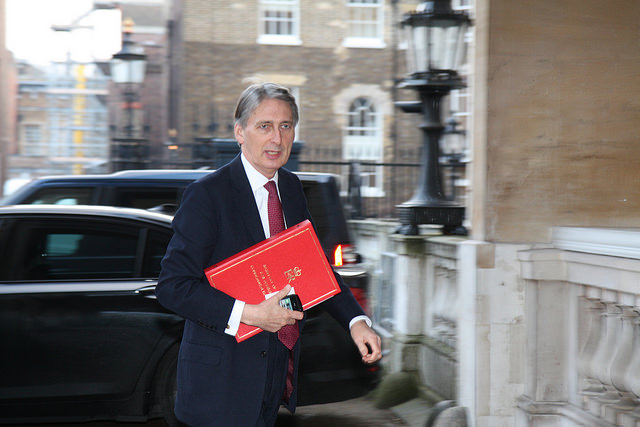 The Autumn Budget has been revealed with key announcements on Universal Credit, VAT and investment in technology

THE UK GOVERNMENT’S tax and spending plans for the year were announced in Chancellor Philip Hammond’s budget speech on Wednesday, which will have far-reaching consequences – one way or another – for people across the UK.

Hammond sought in his statement to present an image of “kind conservatism”, making multiple references to the need to support families with a balanced approach to investing in the future and helping those who need extra help in the short term.

The Chancellor also used the budget to take aim at the Labour opposition for just about everything, pointing out the comparative successes of the Tories in their seven years in government.

But we know that hour-long finance speeches aren’t always thrilling to listen to, so we’ve broken down the key points so you don’t have to.

Hammond began his announcement with Brexit, but was quick to move on swiftly, saying that the budget was about “much more than Brexit”.

Acknowledging the need to protect businesses by preparing for Brexit, Hammond announced that in the coming weeks the government would be working on an implementation agreement to allow businesses to plan ahead.

Having invested £700m in Brexit preparations already, the Chancellor announced that the government will now set aside £3bn over the next two years and “stands ready to allocate further sums”, if and when these are needed.

While defending the principle of the controversial Universal Credit as delivering a “modern welfare system where work always pays”, Hammond made some key concessions on the implementation of the benefit.

In another effort to illustrate the government’s willingness to help those in lower incomes, Hammond announced that personal allowance –  tax free income – would increase to £11, 850, and that the higher rate would be lowered to £46, 350.

The Chancellor made some specific announcements regarding each of the devolved administrations, including, of course, the big one: the devolved budgets.

Responding on Twitter, First Minister Nicola Sturgeon said: “More than half of the headline £2bn (£1.1bn) is in the form of Financial Transactions – money that can be used for limited purposes only and has to be repaid by @scotgov.”

The Chancellor also revealed, as anticipated, that the UK Government will legislate to allow VAT refunds for Police Scotland and Scottish Fire and Rescue from April 2018 – meaning that tax owed from the point onwards can be reclaimed. This falls short of calls by the Scottish Government to allow a tax rebate for the years since 2013 when the services were centralised.

Hammond made sure to give full credit for the decision to the Scottish Tories, saying that, despite the fact that the Scottish Government knew they would lose out on the refunds when the single forces were created:  “My Scottish conservative colleagues have persuaded me that the Scottish people should not lose out just because of the obstinacy of the SNP Government.”

Hammond made one further Scotland-focussed announcement – for which he also thanked his Scottish Tory colleagues – which was the introduction of transferable tax history for oil and gas fields in the North Sea.

The aim is to encourage new investment and thereby provide an economic boost.

A number of environmental groups have already criticised the move, however, with Friends of the Earth Scotland arguing that it will “increase our climate emissions at a time when we need to rapidly moving away from fossil fuels”.

Also unlikely to please environmentalists was an announcement to freeze short haul air passenger duties and long haul economy rates – to be paid for by an increase in tax on premium class tickets and private jets.

In a move slightly contradictory in aim to another car related announcement (see below), the Chancellor also revealed that an increase in fuel duty for petrol and diesel will again be cancelled and celebrated the long freeze which the Conservative government has maintained.

All of that being said, Hammond did attempt to highlight areas of the budget with a greener focus.

Hammond was eager to present Britain and the Conservative government as leading a “technological revolution” – of which those futuristic driverless cars would only be a part.

It was announced that the tobacco duty escalator will continue to rise at inflation plus 2 per cent, with additional one per cent on hand rolling tobacco this year.

In an attempt, Hammond explained, to address alcohol misuse among vulnerable people, Hammond announced the UK Government will now legislate to increase duty on high strength alcohol such as white ciders.

In contrast, duties on other ciders, wine, sprits and beer will be frozen. “Merry Christmas,” Hammond said.

Hammond was clear that he would “take no lectures” from Labour on tax evasion, claiming that the Tory Government had already done more on the issue than its predeccessors.

That being said, the government will seek to raise £4.8bn more in taxes by 2022-23 with further measures to prevent evasion.

The Chancellor revealed that the VAT rate would not be reduced over the next two years, but that he would consult on whether there are ways it can better incentivise growth given concerns around the tax.

Also announced was a plan to address online VAT fraud by making all online marketplaces jointly liable with services based on their provider – likely to impact on large companies such as Amazon and Apple.

One of the major focuses of the budget was housing, and although these policies don’t impact on Scotland, considering that housing policy has been a key area in which campaigners have been pushing for reform, it is likely that many in Scotland will be keeping a close eye on the developments.

Other key announcements in areas which are devolved included the introduction of a new railcard for those 26-30, providing a third off rail fares; £10bn in capital investment to frontline NHS services and an additional £2.8bn in resource funding; investing in maths and IT teacher training; and making over £1bn of discounted lending available to local authorities to support high value infrastructure projects.