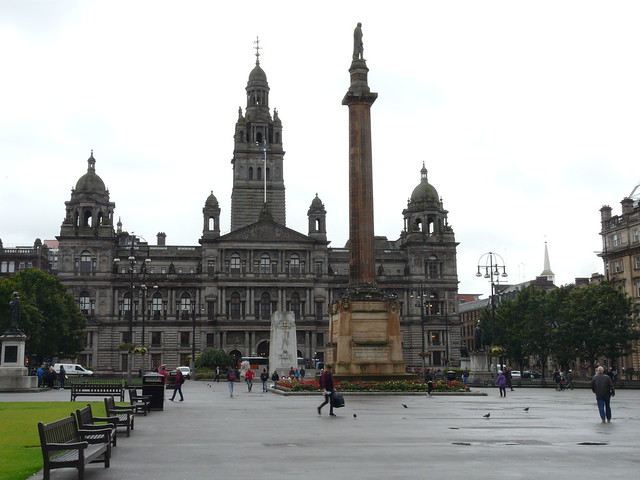 Jason Miller, protest organiser: “Glasgow City Council have a legal obligation to find homes for everyone in Glasgow”

PROTESTORS who set up tents in Glasgow’s George Square to demand housing have a one week reprieve from eviction by Glasgow City Council after a hearing in the Sheriff Court today [3 April] was delayed.

Glasgow City Council issued an eviction notice decree at the Glasgow Sheriff Court, but the judge allowed the continuation of the case for a week so that the demonstrators could access a lawyer.

A group of homeless protestors appeared in person at the Sheriff Court branding themselves ‘’The Occupants”.  The group was represented by Sean Clerkin, an activist in the Scottish Tenants Organisation in Glasgow, as they were unable to obtain legal aid before the court date.

Clerkin told the court: “As of yesterday morning this was the first we knew about court date.

“We want sufficient legal representation to come in.’’

The protestors have been residing in George Square since Monday 25 March. Glasgow City Council said in the Court that they had offered assistance to them, but that most offers had been declined.

Following today’s decision, a spokeswoman for Glasgow City Council told CommonSpace: “Offers of help remain open to any of the protestors who need and want it. Unfortunately, this help has repeatedly been rejected. In the interest of fairness, the Council did not oppose the request for a brief continuation of the case to enable the protestors to instruct a lawyer.”

No one who was officially part of the protest was available for comment, however a supporter outside Glasgow Sheriff Court branded the decision as a “small victory”.

A main goal of the protestors had been to secure housing for everyone involved, taking inspiration from 2015 protests which were also within George Square and resulted in all who took part securing permanent housing.

Talking to Glasgow Live earlier this week, organiser of both protests, Jason Miller, said: “Glasgow City Council have a legal obligation to find homes for everyone in Glasgow, they are leaving people to die in shop doorways.’’

A report published by the Critical Incident and Homeless group, set up by the the City of Glasgow Council, showed 47 people who were classed as homeless died between October 2017 to October 2018.

2017 saw the first rise in homelessness in Scotland for 9 years according to statistics from Shelter Scotland, leading to the Scottish Government initiating a homelessnes and rough sleeping action group which published its plan in November of last year which “aims to achieve a fundamental shift to rapid rehousing”, a strategy based on the ‘housing first’ principle and the notion that “housing is a basic human right”.

A report by the investigatory media outlet the Ferret in November last year found that on average two people die per week in Scotland while homeless.

On Tuesday CommonSpace reported that Edinburgh City Council has by far the worst record in Scotland on breaching temporary accommodation orders through providing unsuitable hotels and B&Bs for those in need of emergency provision. Edinburgh accounts for 72 per cent of all unsuitable temporary accommodation in Scotland, a finding which one Green councillor described as “shameful”.

*This article has been edited following publication. The original article said the eviction notice had been upheld, which was inaccurate.