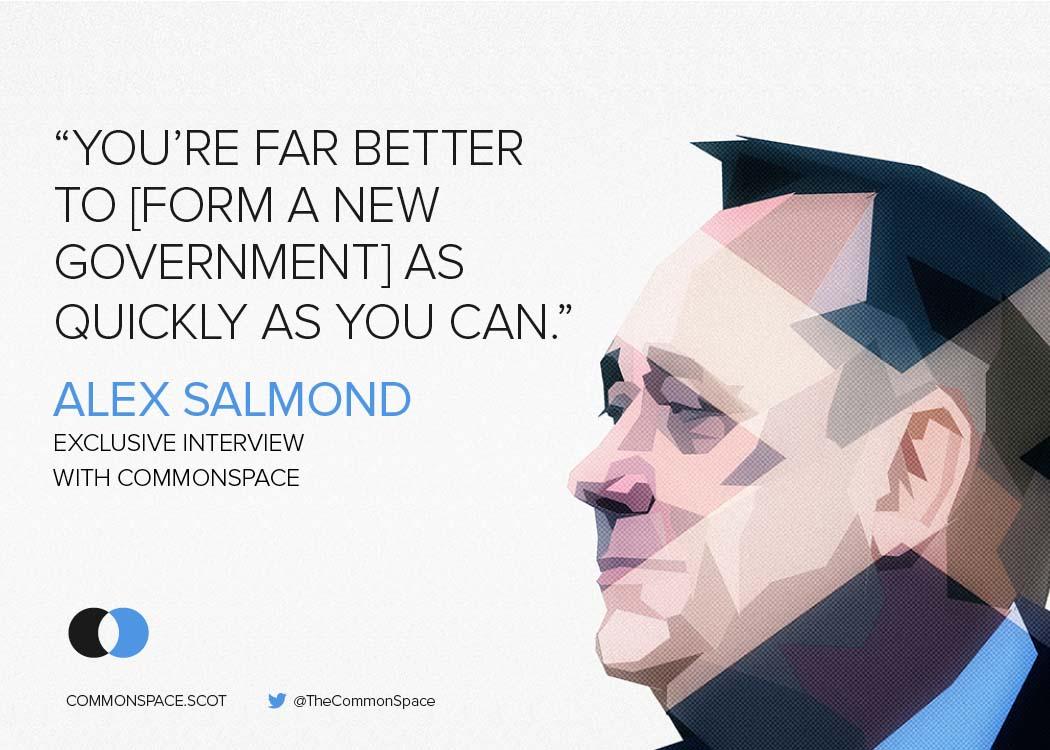 Any post-election deal should be agreed quickly to ensure stability, Salmond tells CommonSpace

ANY DEALS between political parties after the General Election should take place as quickly as possible to ensure a stable government, according to former first minister Alex Salmond.

Speaking to CommonSpace about whether civil servants and financial markets would welcome a clear and decisive deal after the election, Salmond explained that it made political sense to agree a programme for progress in the week after the election.

Salmond said: “What matters in that situation [a hung parliament] is that you have a clear route forward. Do I think it’s a good idea to draw out negotiation for two weeks, three weeks, four weeks? No. I think you’re far better to get it done as quickly as you can. That’s not because of markets that’s because you want a government in to set a direction.

Salmond pointed out that on current polling a deal between Labour and the SNP may be the only way for a secure majority to be found in the House of Commons. However, he added that there remained a long way to go till election day.

Salmond also welcomed the suggestion that the SNP could work with MPs on the left of the Labour party.

John McDonnell MP said that 30-40 Labour members of parliament would rebel against Ed Miliband if there was any plan to continue austerity.

Salmond said: “I hold John McDonnell in high regard, and in certain aspects I agree with John,” adding that Miliband’s position on cuts and trident “wouldn’t hold in that post-election atmosphere”.

The Fixed Term Parliament Act, according to Salmond, also strengthens the SNP’s negotiating position as it means any fresh election would require the support of at least a majority of MPs.

He also had strong words for Labour in Scotland’s communications adviser John McTernan, who worked with Labour in 2011 and Australian Prime Minister Julia Gillard: “He can complete a hat-trick. He failed in 2011 in Scotland. He failed in Australia. And now he can come back to Scotland & fail again. Great.”

You can listen to the General Election section of CommonSpace’s interview with Alex Salmond from 30:55 in the above video.