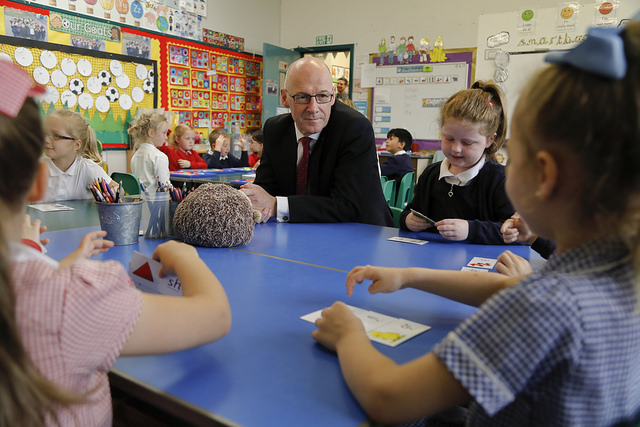 It remains unknown what legal advice the Scottish Government received on parents’ rights to opt out of the new national standardised tests, or whether it supports their position

THE SCOTTISH GOVERNMENT has been urged to release legal advice regarding parents’ rights to opt out of controversial standardised tests, after an FOI confirmed that Ministers have received legal advice.

A Scottish Government official sent a letter to councils claiming that the government had been advised by The Society of Local Authority Lawyers (SOLAR) that parents had no right to opt out of the Scottish National Standardised Assessments (SNSAs).

This was swiftly rejected by SOLAR themselves, who said that they had not offered any legal advice to government on the matter. The Scottish Government apologised for the letter, claiming it had been sent in good faith but was “inappropriate”.

Information now released following an FOI request by the journalist James McEnaney has confirmed that the Scottish Government has sought its own legal advice on the specific issue of parents opting out of standardised testing for their children.

The Scottish Government declined to confirm to both McEnaney and CommonSpace whether or not more than one legal opinion on the matter had been sought, and also refused to release the legal advice itself, arguing that doing so would not be in the public interest.

A Scottish Government spokesperson told CommonSpace: “The Scottish Ministerial Code is clear that Ministers must not divulge either the source or content of legal advice, other than in exceptional circumstances.”

Sue Palmer, chair of the campaign group Upstart Scotland, which has opposed the tests and encouraged parents to withdraw their children from them, has called for the Scottish Government to clarify the situation by releasing its own legal advice.

“There’s already been dreadful confusion around parents’ right to opt their children out of P1 tests, with inaccurate information given out by the Scottish Government. We need a clear statement of the position.” Upstart Scotland chair Sue Palmer

Palmer commented: “There’s already been dreadful confusion around parents’ right to opt their children out of P1 tests, with inaccurate information given out by the Scottish Government. We need a clear statement of the position. It would be very surprisingly if children were forced to sit highly controversial tests, which the Scottish Parliament has voted to abandon.”

An August letter by Graeme Logan, a deputy director at the Scottish Government’s Learning Directorate, claimed that SOLAR had advised that “parents don’t have the option to opt out of the assessments.”

This added credence to claims by the parent and teacher charity Connect, which had previously claimed that pupils were not being opted out of the tests due to the widespread belief that the tests were “mandatory.”

Connect further argued that the letter by Logan represented “a step-change in the Scottish Government’s stated approach”, describing it as “draconian.”

Last week, a non-binding Conservative motion calling on the Scottish Government halt the roll-out of tests for 5-year-olds was backed by 63 votes to 61. Although this was widely regarded as a symbolic defeat for the minority government, Education Secretary John Swinney has signalled that he will press ahead with the new testing regime. Opposition parties have called on Swinney to “respect the will of parliament”.

The legal position regarding standardised assessments was set out by Swinney in Holyrood last week, though it is unknown if the legal advice the Scottish Government received supports it.

Swinney said: “In common with virtually all aspects of the Scottish curriculum and its delivery, the SNSAs are not explicitly provided for in legislation. That is in keeping with the long tradition of a non-statutory curricular approach in Scotland. It means not only that the assessments are not compulsory but that there is no legal right for parents to withdraw their child from the assessments.

“It has been the case since the assessments were introduced that a child should not undertake an assessment if doing so would not be in their best interests.” Education Secretary John Swinney

“In fact, there is no statutory right for parents to withdraw their child from any aspect of schooling other than parts of religious observance and instruction. The position on standardised assessments is therefore the same as that for literacy and numeracy. There is no explicit statutory provision that requires a school to teach them—Scotland has never had that – but the idea that that means that schools are not required to teach pupils to read and write is patently ridiculous. The same is true of standardised assessments.

Swinney continued: “In practice, any parents or carers who have concerns about their child’s participation should discuss that with their child’s school. It has been the case since the assessments were introduced that a child should not undertake an assessment if doing so would not be in their best interests. It is – rightly – for teachers, in discussion with parents, to determine when that is the case.”

Following the Scottish Government’s defeat on testing last week, both East Lothian and Aberdeen councils are reportedly looking at whether the assessments can be suspended at P1 level. The teachers’ union EIS also continues to campaign against the tests, urging parents to ask schools not to allow their children to participate.

Additional reporting for this article was contributed by James McEnaney.