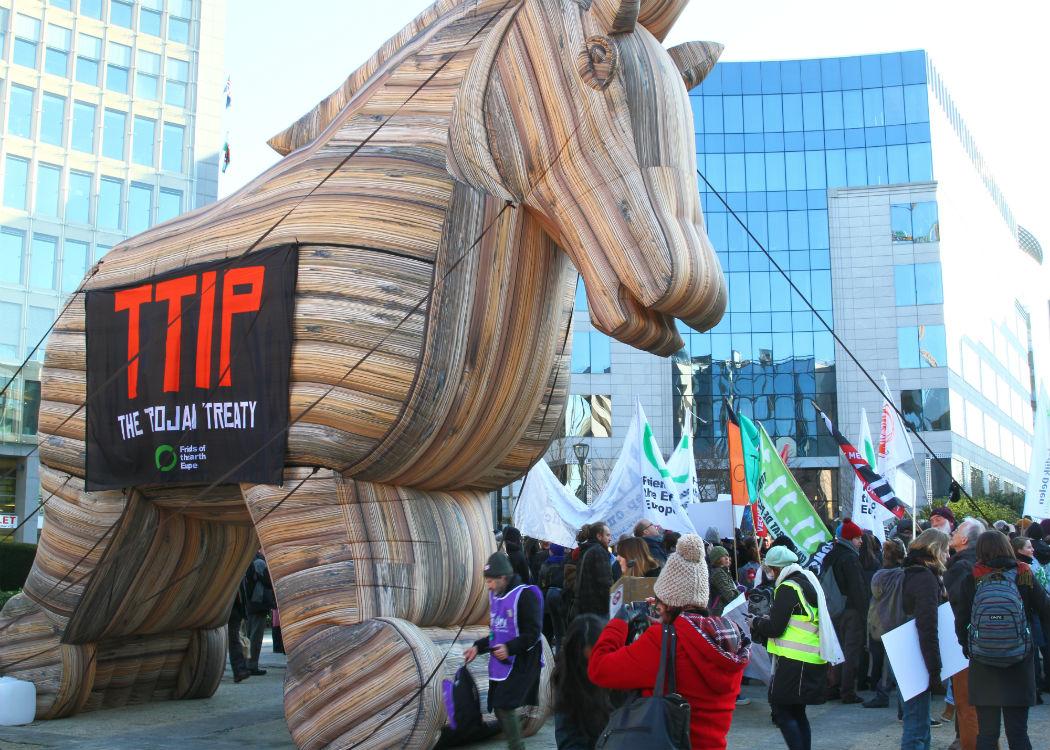 CAMPAIGNERS have criticised the motion for SNP conference over the controversial TTIP trading deal.

The motion, which CommonSpace has seen, calls on SNP representatives at Westminster, Holyrood and the EU “to work towards the specific exclusion” of Scottish services, including the NHS, education and water, from possible threat of privatisation under TTIP.

However, it does not call for blanket opposition to the proposed trade deal, still being negotiated between the EU and the US, and does not include any bone of contention with the highly controversial ‘investor-state dispute settlement’ (ISDS) part of the deal, which was attacked by a report on TTIP from the Scottish Parliament’s European and external relations committee.

The resolution states: “Conference calls for our representatives in the European, Scottish and Westminster Parliaments, to work towards the specific exclusion from any negotiated TTIP settlement of the Scottish NHS and all other Scottish public services such as, but not limited to, education, water and food standards.”

Commenting on the motion, Stephen Boyd assistant secretary of the STUC told CommonSpace: “While even its advocates acknowledge that the potential economic benefits are tiny, the STUC strongly believes that TTIP will have seriously detrimental consequences for democracy and equality. Removing public services from TTIP may improve the agreement but it won’t affect the regulatory harmonisation agenda at TTIP’s core; an agenda that, by forcing through international trade agreement that which can’t be achieved through domestic political process, is fundamentally anti-democratic”.

The Transatlantic Trade and Investment Partnership aims at reducing government regulation in significant areas of economic and social life, and has been criticised by campaigners for being anti-democratic as it includes a clause to take the legal resolution of conflicts over trade out of the hands of nation-states.

Intended to increase economic interpenetration between European and US markets, it is controversial among anti-TTIP campaigners for allegedly endangering public services, threatening job losses, reducing banking regulations and for its negotiations being closed to the public among a raft of other alleged implications.

Liz Murray, head of Scottish campaigns for Global Justice Now, told CommonSpace that the resolution “rightly highlights the threat to public services and food standards from TTIP – but actually TTIP goes further than that.”

She continues: “It is an unprecedented transfer of power from democratically elected governments to multi-national corporations and, if passed, would be a threat not only to Scotland’s public services, but also to regulations designed to protect public health, workers rights and the environment and to democracy itself.”

The European and External relations committee, which is chaired by SNP MSP Christina McKelvie, produced a report after taking widespread evidence on TTIP which said that there was “genuine and well founded concerns” about “the risks of national court systems being bypassed by major corporations” from ISDS.

The report therefore concluded that “any disputes should be resolved in accordance with the legal systems and processes of the country concerned.”

He said ISDS mechanisms “are being used by increasing numbers of companies to take aggressive ‘investor protection’ cases against the legitimate and democratic decisions of governments.”

“This is unacceptable and is made even worse by the deeply undemocratic nature of the corporate arbitration panels which oversee a process outside national law and with no right of appeal.”

The European Parliament has been divided over ISDS, with its recommendations to the European Commission on TTIP due to division over the issue. Eventually it proposed that ISDS is replaced by a new transnational system where “private interests cannot undermine public policy objectives.”

The resolution is to be put before the SNP conference on 15-17 October 2015 in Aberdeen.