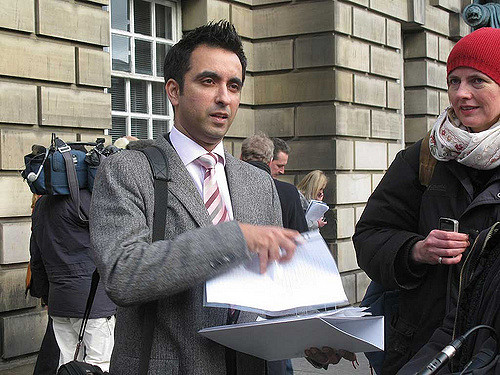 AAMER ANWAR, the lawyer for former Catalan minister Clara Ponsati, has defended the Scottish Government’s lack of direct intervention in his client’s case and has announced that crowdfunding on her behalf will begin shortly.

Following the issue of a European arrest warrant of Clara Ponsanti, former education minister to the Catalan Government and a professor at St Andrews University currently living in Scotland, Ponsati is expected to present herself to Police Scotland this week.

The issue has aroused widespread outrage amongst the Scottish independence movement, much of which is noted for its vocal solidarity with Catalonia, and has led to calls for the Scottish Government to intervene.

Referring to calls for direct intervention by the Scottish Government, Anwar told CommonSpace: “With respect, they can’t [intervene], and it’s the correct position.”

He continued: “I’ve seen a lot of positioning by people who – quite rightly – support the Catalan struggle for independence [and] support the position of Clara Ponsati. But the position is fundamentally correct, that the Scottish Government has taken, and the Justice Secretary has taken, and Nicola Sturgeon has taken: it is not for government ministers to interfere in the judicial process in this country. We have an independent judiciary, and due process will take place.

“If there’s any further interference, then the real question that will be asked is what will be the difference between our courts or our government and the Spanish Government? It’s really not for government ministers to interfere.”

“It is not for government ministers to interfere in the judicial process in this country. We have an independent judiciary, and due process will take place.” Lawyer Aamer Anwar

Responding to remarks made during Topical Questions in the Scottish Parliament that any government making use of a European arrest warrant also abide by the fundamental rights enshrined in the founding of the European Union, Anwar said: “That’s a connected issue, and that’s an issue that I would be hoping that the Scottish Government [and] the UK Government will be taking up with the Spanish authorities.

“I have stated from the start that we believe that the Spanish Government is abusing the system of the European arrest warrant, and trying to draw in European countries into complicity in the persecution of Catalan politicians.

Anwar continued: “European arrest warrants are traditionally used for extremely serious crimes, such as murder, drug dealing, etc. In this scenario, what my client faces is a charge of rebellion, and misappropriation of funds whilst in public office in relation to organising of the referendum, punishable by up to 30 years’ imprisonment.

“Now it’s pretty clear, what Clara Ponsati claims, is that this is a political persecution that is motivated by political malice – that she cannot be guaranteed due process in the Spanish courts. In the context of the European arrest warrant, that is a matter that I would expect Scottish Government to take up at the highest levels, and for the UK Government to take up. Because the Spanish Government cannot be allowed to go on like this.”

In addition to the warrant issued for Ponsati, German police detained former Catalan president Carles Puigdemont on a similar warrant, following his self-imposed exile in Belgium in the aftermath of the Spanish Government’s imposition of direct rule on Catalonia.

Anwar said: “It is a total abuse of the powers, because quite clearly, the European government’s hands are tied. They can be sympathetic, but to be honest, the only government so far that we’ve really seen speak out in Europe has been the Scottish Government, about the treatment of Catalan politicians. But their hands are tied by the law, and they have to let due process take place.”

“She is charged with rebellion, with violence against the unity of the Spanish nation. Putting that in context, what she is guilty of is being an education minister for two and a half months, and having peacefully promoted the referendum; allowing people in Catalonia to queue up peacefully at the ballot boxes, and to cast their vote on whether they want to be independent or not be independent. That’s a democratic principle.”

“What she is guilty of is being an education minister for two and a half months, and having peacefully promoted the referendum.” Lawyer Aamer Anwar

“To then take that, and then send in Spanish police, with their truncheons and their rubber bullets, to terrorise and brutally attack a whole people because they happen to be Catalan, and attack them and abuse their powers – and then subsequently, what we have is a situation where most of the Catalan Government is either in exile or in prison – quite clearly is seen and described as political persecution. So of course, if those individuals are sent to prison, then they have every right to class themselves as political prisoners.”

Asked if he had communicated with any other organisations in order to coordinate solidarity efforts on behalf of Ponsati – such as the Catalan Defence Committee Scotland, of which Anwar is a signatory – Anwar responded: “At this point in time, I’ve been purely concentrating on the legal aspect. This is a battle that feels almost like David and Goliath, to be quite honest.

“A lot of people have asked me these questions. My driving purpose is to represent my client, and to ensure, first of all, that she wasn’t arrested on the street or from her home. So the primary issue tomorrow is for us to get Clara Ponsati out of custody, and back home to St Andrews.

“The other issues – whether it be the Catalan Defence Committee or for other organisations – is for them to take this up, and to provide support and solidarity, and Clara has quite clearly stated, she welcomes the tremendous support she has received from individuals and organisations.

“For her to now face charges where potentially she could face 30 years of her life, at the age of 61, locked up in a Spanish prison, is grotesque.” Lawyer Aamer Anwar

“I’m the lawyer for Clara Ponsati. My job is for me and our legal team to represent her in court. These are matters that other organisations can take up in support and solidarity for Clara Ponsati, and I hope that they do, because we need to move extremely fast.

“In the days ahead, for instance, there will be a crowdfunder, hopefully by tomorrow, because we require a huge number of resources to fight this case. The Spanish state has all the resources available. And we want to see motions being passed – whatever these organisations think is fitting in terms of support.

“People have asked me the question of ‘How is Clara?’ She’s resolute and she’s determined, but quite clearly she’s shocked and she’s upset by facing these charges. She’s an academic – her lifetime is one of academia, of teaching predominately young people and giving them an education and giving them a future. That’s the basis on which she became involved in Catalan politics, because she wanted a future for the young people of her country.

“For her to now face charges where potentially she could face 30 years of her life, at the age of 61, locked up in a Spanish prison, is grotesque.”

Explaining his view on what actions those seeking to aid Ponsati should take, Anwar said: “She welcomes the support from the Scottish Government, from organisations, from individuals – I have never, in over 28 years of campaigning, experienced the huge onslaught of support this case has received. Within the space of 24 hours, I literally – on my social media – was getting hits of over 650,000 people. I’ve just never seen that.

“People want to provide practical support, people have sympathy and solidarity, so yes, that is more than welcome. But it’s for those people to organise that, it’s not for me as Clara’s lawyer to organise that.”