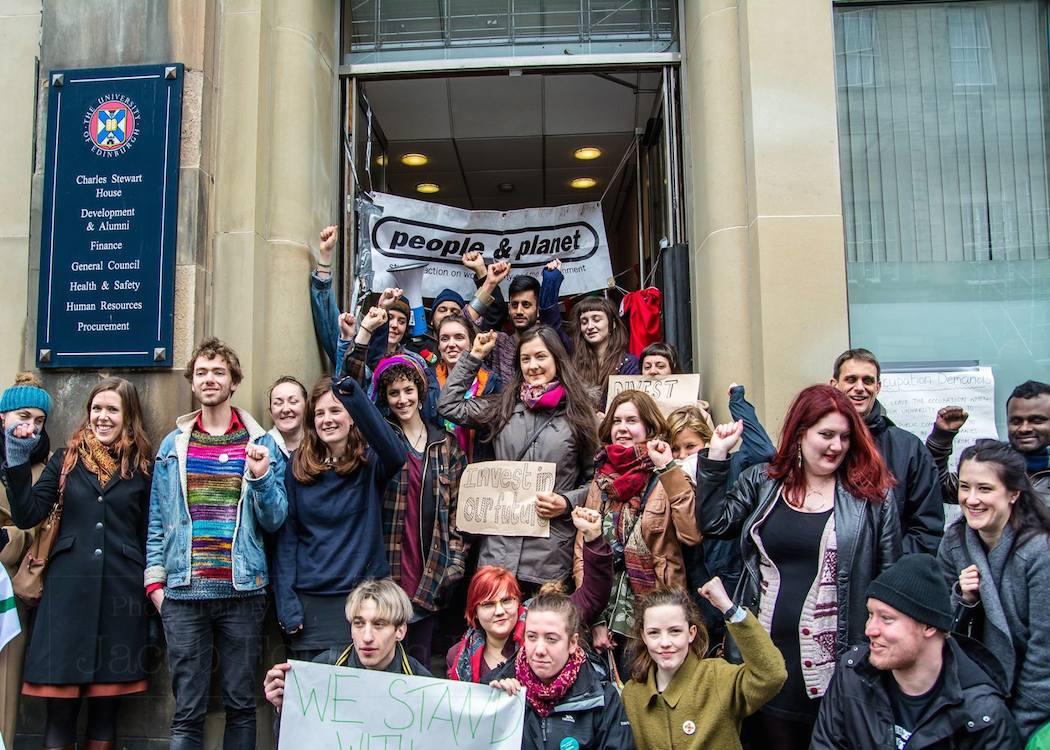 A meeting of “finance managers” last month felt “a clearer strategy is required from top down” to counter the campaign against university fossil fuels and arms investments, and therefore “managers along with security” should monitor the communications of student activists.

To force the message home, the meeting agreed to “speak to relevant director” [one of the most senior university officials] regarding the “monitor social media” strategy. The university’s director of finance is Phil McNaull, who did not respond to quests for comment over whether he sanctioned the strategy.

Students in Edinburgh have repeatedly taken direct action over the past year to challenge the millions of pounds in unethical investments by the university.

While significant concessions were originally made to the campaigners, most recently university senior management has taken a more aggressive stance by launching disciplinary proceedings against six individuals involved in the protests. This was condemned by the wider student association and dozens of student societies.

Speaking to CommonSpace about the strategy to spy on activists communications, People and Planet campaign organiser Kirsty Haigh said: “It’s pretty shameful that the university value their relationship with fossil fuel companies more than with their own students. The university keeps talking about being sustainable but the efforts they’ve gone to so they can avoid divesting from fossil fuels and arms companies clearly show a different story.”

Student activist Delphi Macpherson added: “Instead of spending obscene amounts of money on security systems and social media monitoring, why don’t the university just divest the less than 1 per cent of their portfolio they have invested in fossil fuels?”

At last year’s occupation of Charles Stuart House a video recording emerged of an alleged assault by university contracted security staff on one young campaigner, an incident the university “deeply regrets” . A man was later charged as a result of the incident.

Charles Stuart House, the university’s main financial office, was again the site of protests this year due to its management of investments in arms and fossil fuels .

The divestment movement has successfully pressured institutions to move their portfolios away from companies that support war or fuel climate change.

Students at Glasgow won a full campaign against fossil fuels investments, although the university still invests in arms .

Due to Edinburgh protests, the university claims to have ended all arms investments .

Previously just under PS1.5m was held in Rolls Royce (military engines), Meggit (drone warfare and arms to the abusive Bahraini regime) and Heico (US weapons manufacturer).

However, official policy would still allow future investments in companies that make under 20 per cent of their turnover from arms.

Campaigners claim that the success of campaigns has led to a “crackdown on political dissent” on campus, which includes the ‘spying strategy’.

An ongoing high court case into police spying on activists found that dozens of undercover officers embedded themselves with environmental and anti-corporate protests to provide information to police on protest activities. Other spying activity includes the secret, illegal ‘blacklisting’ of left-wing campaigners by eight major construction firms which is also under further scrutiny in the courts.

A University of Edinburgh spokesperson confirmed to CommonSpace that disciplinary procedures were ongoing. On the university’s social media monitoring strategy, the spokesperson added: “The university, like any major organisation, has a duty to be aware of activity concerning itself on social media and other public platforms as part of its general communications activity.”