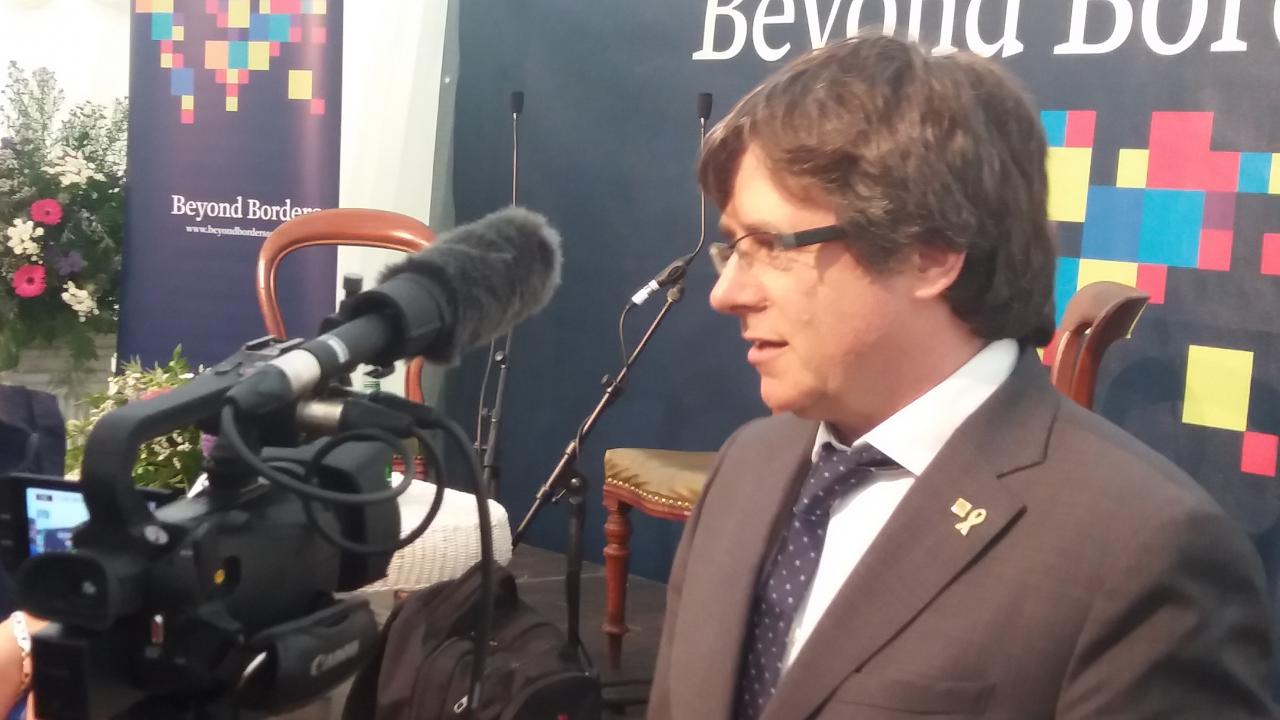 Speaking at the Beyond Borders festival during a surprise visit to Scotland, Puigdemont emphasised that a Francoist culture persists in the Spanish “deep state”

FORMER CATALAN PRESIDENT Carles Puigdemont spoke to CommonSpace about his ideas for a radical transformation of the Spanish authorities and system of government in order to rid them of the “shadow of Francoism”.

The 130th president of Catalonia, who remains in exile from Catalonia and all Spanish jurisdiction due to charges levelled against him for his involvement in the 2017 Catalan independence referendum, spoke to CommonSpace during his surprise visit to Scotland to address the Beyond Borders International Festival at Traquair House.

Noting the recent decision by the Spanish Government to exhume the corpse of the fascist dictator Francisco Franco, Puigdemont told CommonSpace that such gestures alone were not sufficient to rid Spain of Francoist influence.

Puigdemont stated: “I think the most important [way to tackle enduring Francoism] is to start a program of de-Francoisation of the political culture and public spaces in Spain.

“Of course, most important is to change the minds of the deep state, and to do something in order to have a real separation of powers; to have an army and a police with no political links with the fascist ideologies.”

Finally, said Puigdemont, it will be necessary “to recognise the victims of Francoism – to exhume the thousands and thousands of bodies that disappeared during the civil war; to return the bodies to their families. That is a question of dignity.”

During his wide-ranging discussion of issues confronting Catalonia with the Colombian writer Óscar Guardiola-Rivera, Puigdemont expanded upon these themes, noting that the Franco regime had come to an end while he was a teenager, providing him with an insight into what it was like to live without democracy.

Echoing the sentiments of Aamer Anwar, the lawyer for exiled Catalan minister Clara Ponsati, who has repeatedly argued that Francoism persists in the modern Spanish state, Puigdemont observed that the vast tomb where Franco’s body has traditionally resided “is still paid for with public money.”

He explained: “You can go to Madrid and pay nine euros to visit the grave of Franco, and the body of the founder of the fascist party of Spain, the Phalange. That monument is paid for with public funds.

Puigdemont continued: “Every year, a lot of people show their support to the fascist regime. If you look to the reality, you can find a Francisco Franco Foundation that is absolutely legal, and receives public funds. Not one part of that is illegal.

“The only thing that is illegal in Spain is to call for a referendum of self-determination. That is the paradox.”

“You can find a Francisco Franco Foundation that is absolutely legal, and receives public funds. Not one part of that is illegal. The only thing that is illegal in Spain is to call for a referendum of self-determination.” Former Catalan president Carles Puigdemont

Addressing the decision by the government of Spanish Prime Minister Pedro Sánchez to exhume Franco’s corpse, Puigdemont described it as “good news – seriously. But 43 years later?

“The democratic transition was a failure. Not only because the king of Spain was nominated by Franco – that is in evidence, it is not an opinion – but because the [Spanish] deep state is not so far from the Franco dictatorship. The culture, I mean.”

Referring to a recent public statement signed by over 180 high-ranking officers of the Spanish military demanding respect for Franco in response to the announcement of the dictator’s exhumation, Puigdemont again emphasised: “That is legal. But if you sign something against the monarchy, you can be condemned to more than three years in jail.

“That is one of the keys to understanding what is happening in Spain.”

Addressing the current Catalan political situation, Puigdemont further railed against Spain’s democratic shortcomings by reminding his audience of his own fugitive status, and the former members of his government that remain political prisoners.

“I’m living in exile. A significant part of my former government is still in jail, facing charges for rebellion and embezzlement of funds which could represent thirty years in jail.

“Nine of my colleagues still in jail are there without trial. And they were elected, and they act as elected politicians. But because of that, they are in jail.”

Yet despite these difficulties, Puigdemont went on, the Catalan independence movement persists; describing the factors which have allowed it to reach this point, Puigdemont said: “First, people. That is important. We never can decide without people. And that is one of the key questions of our culture.

“Second, human rights. Within the framework of human rights, it [independence] is possible.

“Finally, respect – respect for others that think different from you.

“If you put in all these ingredients, you will cook not only a Catalan cake, but a democratic cake.”

READ MORE: Catalan President: We can strike a deal with Spain, but no negotiations ‘in any circumstances’ over freedom of political prisoners

Asked by Guardiola-Rivera if he felt that the chances to build a relationship between the Catalan independence movement and other Spanish autonomous regions had been “squandered”, Puigdemont replied: “We have a good relationship with the other parts of Spain, like the Basque Country or Valencia, but that doesn’t mean they are ready to support our right to self-determination.

“We are probably 16 per cent of the Spanish population. We are a minority. So, it is good for us to be part of a project to transform Spain.

“[But] if you look at the governments of the rest of the autonomous regions in Spain, you can see basically a majority for the Popular Party, and a minority for the Socialist Party,” said Puigdemont, citing the current makeup of Spain’s so-called ‘presidents conference’.

Discussing the distinctions between sovereigntistas – who, like the leftist Spanish political party Podemos, support the right to self-determination, if not Catalan independence itself – and independentistas, Puigdemont argued that Catalonia had attempted many other political solutions to address its unique national needs and aspirations, saying:  “After 40 years of the Spanish constitution, we have tried to present and propose several ways to solve the Catalan issue [that were] not independence; fiscal agreements, new and original constitutional law, non-binding consultations, etc. Always, it was a ‘no’.”

“We have tried to present and propose several ways to solve the Catalan issue [that were] not independence; fiscal agreements, new and original constitutional law, non-binding consultations, etc. Always, it was a ‘no’.” Former Catalan president Carles Puigdemont

Following his arrival in Edinburgh on 25 August, Puigdemont told the Sunday Times newspaper that he could not imagine the UK Government under Prime Minister Theresa May would deny a request for a second Scottish independence referendum, commenting: “I am confident the UK and Scottish governments will reach an agreement, as they did before, to make a second referendum happen, and the right of self-determination for Scotland will prevail.

“I am confident the UK and Scottish governments will reach an agreement, as they did before, to make a second referendum happen, and the right of self-determination for Scotland will prevail.” Former Catalan president Carles Puigdemont

“The Scottish independence movement is in good health and strong… its people had acted very well.

“The Catalan independence movement had learned a lot from Nicola Sturgeon and the Scottish way in its own drive for self-rule.”

Discussing the commonalities and contrasts between the drives for independence in Scotland and Catalonia, Puigdemont told CommonSpace why he felt republicanism was central to the Catalan movement, but arguably less so in Scotland.

Agreeing with his successor Quim Torra’s recent assertion that he would like to see both Catalonia and Spain thrive as republics in future, Puigdemont told CommonSpace: “Yes, of course. I’m a republican, too. We desire for the rest of the peoples of the world is the most democratic regime, which is a republic.

“Probably, if we had a queen like the British queen, the [Catalan] republic would not have had as much support – because we have a king who has done politics. On the other hand, the Queen of the United Kingdom is very, very careful, and very respectful of people’s decisions. So I could understand why there isn’t [as much republicanism in the Scottish independence movement].”