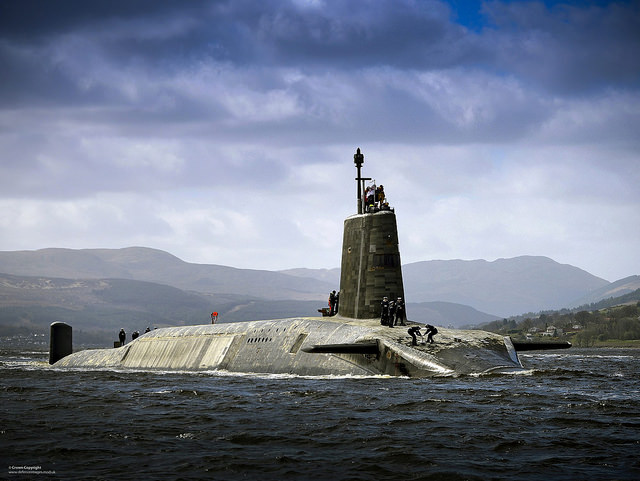 GLASGOW CITY council has maintained that the controversial Undersea Defence Technology conference set to take place next month will not feature discussion of Trident nuclear weapons, despite a session advertised online which refers to the Dreadnought submarines which will carry the new Trident missiles.

The conference, to take place at the Scottish Events Campus (SEC) from 26-28 June, was organised by Glasgow Life, an arms-length charity charged with delivering services on behalf of Glasgow City Council. Glasgow Life bid for the conference in November 2016 and won the contract in July 2017.

The council has faced criticism for maintaining its support for the event due to its promotion of the arms trade, links to companies selling arms to countries committing human rights abuses including Turkey and Israel, and the prominent involvement of companies directly involved in the Trident renewal programme, including BAE Systems and Babcock International.

Questioned on the issue by Green councillor Jon Molyneux last Thursday, depute council leader and head of Glasgow Life David McDonald said the event would “not feature any discussion of the Trident Replacement Programme”, and implied that it was not an arms fair when he stated suggestions included “acoustic modelling through to energy conservation and its use in underwater environments”, a statement campaigners said was an attempt to “whitewash” the conference

However, CommonSpace has identified one session, advertised on the event website, which will see speakers from BAE Systems Maritime Services, Atlas Elektronik UK and the UK Ministry of Defence discuss a paper on ‘meeting tomorrow’s requirement for submarine underwater weapons’.

The description of the event reads: “With commitment to the ASTUTE and DREADNOUGHT submarines the UK will require suitable underwater weapons until at least 2060 and potentially beyond with the Maritime Underwater Future Capability. In that time the tasks that submarines undertake will evolve, as will the threat and perhaps even the environment.

“In this joint paper DSTL, the UK MoD’s Science and Technology delivery organisation, will first explore a range of potential driving influences and how these are likely to shape future underwater weapon Requirements.

“BAE Systems Maritime Services and Atlas Elektronik UK will then build on DSTL’s outline to discuss the industry view of system implications and investigate the technology opportunities, particularly those driven by commercial applications, which may be matured within suitable timescales to meet such Requirements.”

In the words of the Royal Navy website, the Dreadnought class is the next generation of “nuclear-missile-armed submarines”, designed to replace the Vanguard class.

As explained by Atomic Weapons Establishment (AWE), which is responsible for the design and manufacture of the UK’s nuclear weapons: “Trident is an operational system consisting of four Vanguard class submarines, operated by the Royal Navy ensuring a continuous at sea deterrent”.

Asked whether this session contradicted the statement last week by the depute leader that nuclear weapons would not be promoted at the conference, a spokesperson for Glasgow City Council said: “The organiser has confirmed this paper does not feature Trident or the Trident replacement programme.”

Opponents of the event, however, suggested that whether or not the paper being discussed refers to Trident, the event description clearly puts the issue of underwater weapons development within the context of the Trident replacement and the notion of a complete separation of the two in this session is not credible.

A spokesperson for Campaign Against the Arms Trade (CAAT) Scotland said: “There is a clear contradiction in what is being claimed. The Maritime Underwater Future Capability programme is explicitly linked to Trident renewal and the UK’s fleet of nuclear-submarines, this talk at the event even mentions Dreadnought in its description.

“While the presentation may not be explicitly discussing nuclear missiles and warheads, it is covering issues surrounding the renewal programme. It is impossible for this session to be held without discussing matters directly related to Trident and the nuclear submarines that are housed in the Clyde.”

Flavia Tudoreanu of Scottish Campaign for Nuclear Disarmament (CND) said: “I don’t think there was ever a doubt in terms of the connections to Trident – if not through a specific session then through the companies which will be there.

“The people behind the Trident renewal are taking part in this event so they are providing a platform for them.

“We are quite disappointed in the decision of Glasgow Life to support this, and that Glasgow City Council would choose to support this industry which is rejected by most of the elected representatives in Scotland.”

Tudoreanu said that the campaign groups opposing the event had written to council leader Susan Aitken and other officials asking to meet to discuss ways to avoid holding such events without public consultation in future.

She added: “On the website for the event at the bottom you can see the ‘People Make Glasgow’ logo alongside the logos of major arms companies – this does not fit under the slogan ‘People make Glasgow’.”

Campaigners are already planning to stage a protest outside the event next month to make clear that Glasgow does not welcome the arms trade or the developers of nuclear weapons.