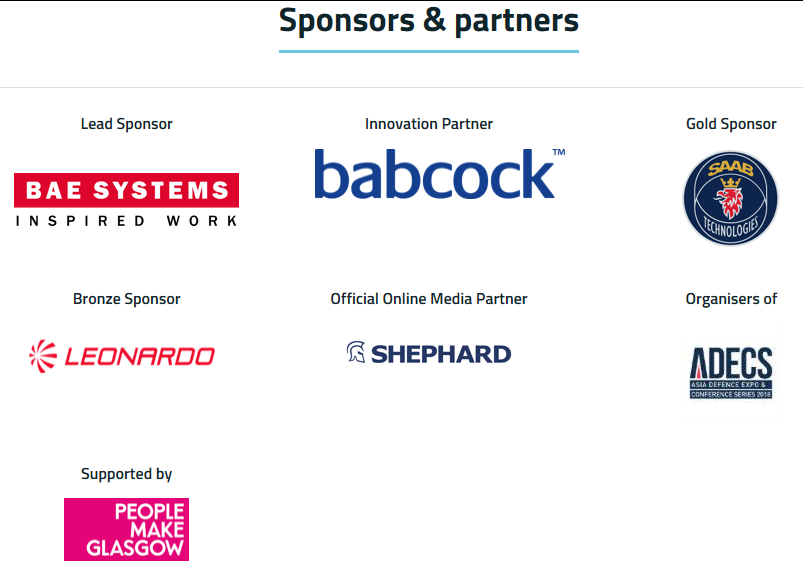 Council spokesperson: “There was clearly some confusion about what [the People Make Glasgow logo] represented on this occasion, so we agreed with the organiser that it was better to remove it.”

GLASGOW CITY COUNCIL’S People Make Glasgow logo has been removed from the website of the arms fair set to take place in one week in Glasgow, but the Council say they are still providing practical support for the event.

In a win for anti-nuke and peace campaigners, who have been pressing the SNP-led Council to drop all support for the arms fair, the Council confirmed to CommonSpace that the logo had been removed from the Underwater Defence Technology website.

A spokesperson said: “Our conventions team uses the brand – and, in this case, that reflected the practical support they offer to event organisers and venues in the city.

“At the same time, the brand is hugely popular and we appreciate that people in the city feel some sense of ownership of it – which is a really positive thing.

“There was clearly some confusion about what it represented on this occasion, so we agreed with the organiser that it was better to remove it.”

However, the spokesperson was clear that the removal of the logo would be the only change to the practical support provided for the event.

The Council had previously defended its hosting of the exhibition, which was bid for by the arms-length Glasgow Life under the previous Labour administration, but awarded under the SNP council in July 2017. Until this week, People Make Glasgow had been listed as a partner and sponsor of the event.

Council Deputy leader and head of Glasgow Life councillor David McDonald was accused of trying to “whitewash” the arms fair after he had defended the decision to host the exhibition under questioning at a Council chamber on 17 May, stating it was a “technical exhibition and conference for underwater technology, defence and security. It includes topics that range from acoustic modelling through to energy conservation and its use in underwater environments.”

However, CommonSpace revealed that Israeli military equipment used to blockade Gaza will be showcased at the event, drawing criticism from SNP Friends of Palestine. Glasgow is twinned with Bethlehem in Palestine’s West Bank and the SNP recently passed a motion of solidarity with the people of Gaza at their national conference in Aberdeen.

McDonald, who said the council would be reviewing its policy towards hosting conventions but refused to say if this meant they would not put on a similar event in the future, had also claimed that there would be no discussion of Trident at the event despite the two main organisers – BAE Systems and Babcock – leading the renewal of the Trident programme. CommonSpace revealed Trident speakers, sessions and a student recruitment exercise at the convention, but the council said it had been reassured by UDT organisers that discussion of the renewal of nuclear weapons at Faslane – which the council opposes – would not be discussed.

Outraged campaigners protested outside the Council last week and a small delegation met council leader Susan Aitken to press her to take a stand against the arms fair.

Jay Sutherland of Scotland Against Militarism welcomed the news of the removal of the People Make Glasgow logo, but said the group “won’t be backing down” until full support is removed.

Sutherland stated: “The decision to use the logo was completely hypocritical to begin with when most people in Glasgow who are aware of this Arms Fair oppose it.

“Scotland Against Militarism and the Sink UDT Campaign first pushed for them to remove the branding with our meeting with Susan Aitken, this was not a decision that the council came to themselves.

“Most of all it shows that people power works and that the council realise they have got it completely wrong, but they are still refusing to remove full support. They recognise that people have claimed the brand but what they don’t realise is that people own the city too and we are not putting up with this.

“We won’t be backing down until they remove their full support for the event, nothing less. Otherwise they are simply hiding their interests.”

Campaign Against the Arms Trade’s Kate Nevens said it is crucial the council put a framework in place for an ethical conference policy for the future.

Nevens stated: “We are delighted that the council appear to be waking up to the anger around this event. Hosting a major arms fair is completely incompatible with a city like Glasgow, which is anti-nuclear and famous for its opposition to war.”

“It is vital that the council put in place a policy and framework to ensure events like this never happen in Glasgow again. We encourage the council to instigate a public discussion on how this policy can work, and how best to remove all council support to global arms manufacturers.”

A spokesperson for Campaign Against the Arms Trade Edinburgh said: “While we are delighted that the logo “People Make Glasgow” will not be plastered over this arms fair anymore, we are incredibly disappointed with the council’s statement.

“The only “confusion” here is about where Glasgow City Council’s loyalties lie. It is shocking that they refuse to even acknowledge the outrage felt by many across the city who would expect an anti-nuclear council to have no part in this event. The council has let itself and the people of Glasgow down massively here simply in order to stay in arms dealers good books.”

The Sink the Arms Fair coalition have called a protest outside the SECC on 26 June at 10am. The coalition includes groups such as Scottish CND, Campaign Against the Arms Trade Scotland, Scotland Against Militarism, Scottish Palestine Solidarity Campaign, Food Not Bombs, Catholic Worker and the Scottish Peace Network.