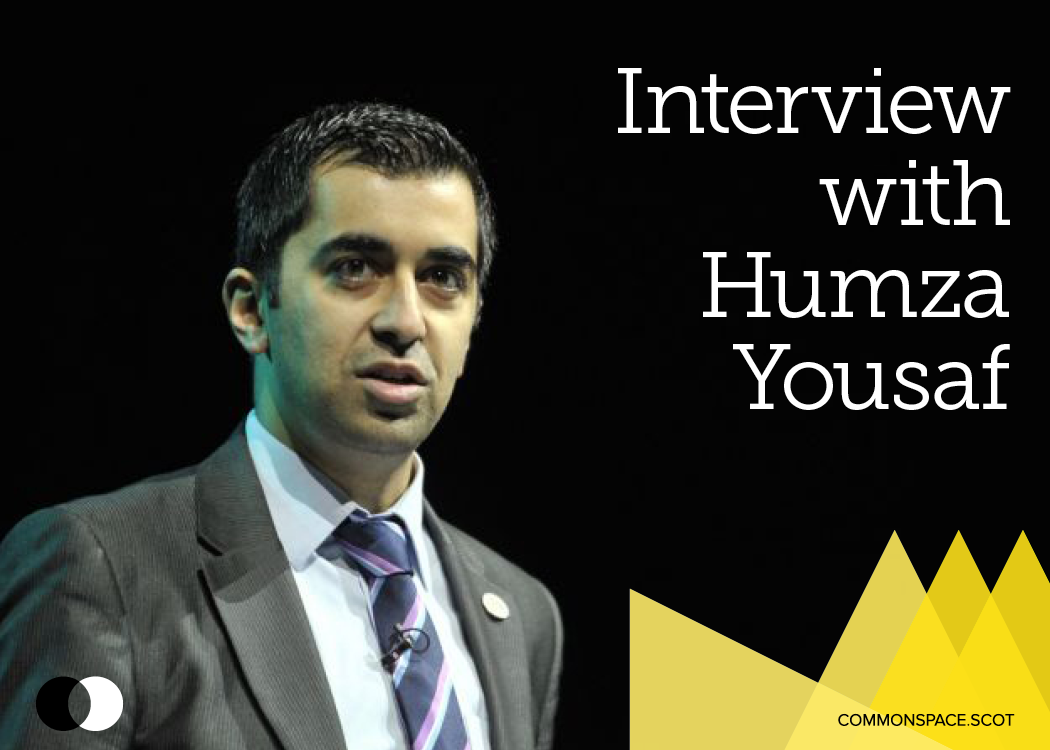 HUMZA YOUSAF has slammed the UK’s “inhumane” detention centres and said he hopes the SNP can work with Westminster parties to close them down.

The SNP’s manifesto for the General Election calls for a review of the current immigration detention system and regime, leading to fears that it could have been a rollback from the party’s earlier position of calling for centres to be shut down.

However, speaking exclusively to CommonSpace, Scotland’s minister for Europe and international development said that he wants to see Dungavel detention centre in South Lanarkshire and others shut “without any shadow of a doubt”.

Yousaf also said that he believes the SNP can find common cause with the Westminster parties in order to work for a more “humane” system as part of its call for a review of the system.

“There has to be some measure for asylum seekers who might be at high risk of absconding. The review is simply about that mechanism,” he said.

“I think Dungavel should be shut without any shadow of a doubt. We don’t think detention is actually a good way to deal with asylum seekers at all.

“We don’t think it’s humane for any asylum seeker to be detained whether it’s in Scotland or across the United Kingdom, so we hope they won’t be needed across the entire UK.

“There will be hell of a lot of Lib Dems and Labour backbenchers and even some Conservatives who will say there is a better way of doing things.” Humza Yousaf

“Generally on asylum seekers, you can find what the leadership says on migrants is different to what the backbenchers say. I think we’ll find common cause with a lot of Labour backbenchers with our policies.

“If we put forward legislation, motions, amendments for a more humane asylum system then you would get a hell of a lot of Lib Dems backing us – although there won’t be many of them left I assume.

“There will be a hell of a lot of Labour backbenchers and even some Conservatives who will say there is a better way of doing things.”

There has been an increased spotlight on the detention of asylum seekers following reports of a hunger strike from detainees, a story first broken on CommonSpace (click here to read more).

Recent revelations have also shown that detainees are only paid PS1 an hour for work while 33-year-old Indian man Panakin Patel became the latest person to die in detention after suffering a cardiac arrest at Yarl’s Wood detention centre in England (click here to read more).

There are hundreds of migrants detained at Dungavel, many of whom have been there for months and some for over a year. The UK is the only country in the EU which holds people in detention indefinitely.

“I would take it as a matter of great pride the day we get Dungavel shut down.” Humza Yousaf

A recent report by a Westminster committee recommended a 28-day limit to and for “community-based resolutions” to be favoured over detention.

Yousaf is adamant that people who come to Scotland should be treated with dignity.

“Asylum seekers are not criminals and should not be treated like criminals,” said the Glasgow MSP. “Even failing an asylum application is not a criminal offence. You have every right to make an application and every right to go through the process. So people shouldn’t be detained as criminals. I would take it as a matter of great pride the day we get Dungavel shut down.”

Recently, following the hunger-strike reports, the Scottish Trades Union Congress (STUC), the Church of Scotland, the Catholic church, the Muslim Council of Britain and the Scottish Refugee Council wrote to the Home Office and the governor of Dungavel asking to meet with detainees (click here to read more).

Yousaf said he was “horrified” at the treatment of the STUC and other civic groups by the Home Office.

“I have given the offer to those organisations that if there’s anything the Scottish Government can do then we’re happy to do that,” he commented.

A demonstration has been called for Dungavel on the 30 May which calls for an end to detention. It has the support of the STUC and other campaign groups.

“Labour is happy to have a pop at immigrants at any opportunity for cheap political gain.” Humza Yousaf

Meanwhile, speaking on the wider issue of immigration , Yousaf said that the onus was on politicians to try to shape more positive attitudes on immigration, and hit out at the Labour party for being “happy to have a pop at immigrants at any opportunity for cheap political gain.”

As part of its General Election campaign, Labour recently released a promotional mug with the slogan “controls on immigration” emblazoned across it.

“I’m disappointed with the Labour leadership in how they’ve been painting migrants. When I saw the controls on immigration mug being sold on their website, I thought that’s different to the Labour party that my mum voted for when she was an immigrant,” he said.

“I think it’s incredibly important that politicians try to shape attitudes and change attitudes. It’s not universally popular. I knock enough doors to know that the SNP’s policy on immigration might not be the most popular on the doorstep but we have to challenge misconceptions.”

A 2014 Oxford observatory study showed that although attitudes about immigration are generally more favourable in Scotland than the rest of the UK, a majority still support reduced immigration.

“We desperately need immigrants for our economic prosperity. It’s not the only thing that immigrants are needed for but it’s important for our economy to thrive. We can increase productivity, we can increase the tax base, these are highly skilled people who want to work so why on earth wouldn’t we let them into the country to do that?” said Yousaf.