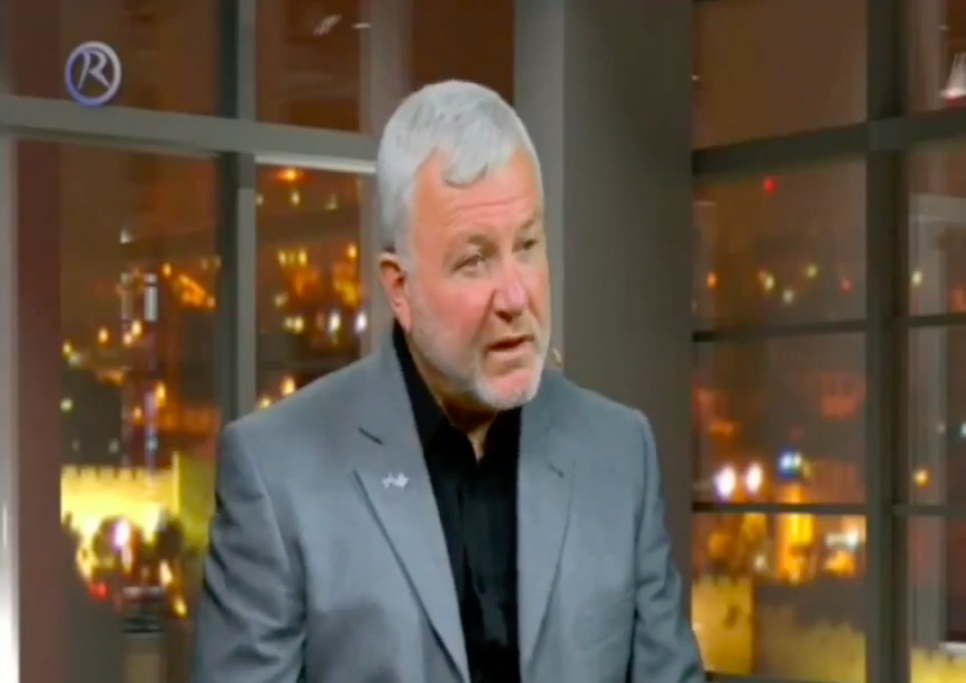 THE leading pro-Israel campaigning group in Scotland has distanced itself from the man who was its convenor until just months ago, after it was revealed he was a member of a racist anti-Palestinian Facebook group.

A representative of Confederation of Friends of Israel Scotland (Cofis) told CommonSpace it has “dissociated” itself from Nigel Goodrich, who is a major architect of pro-Israel networks in Scotland.

CommonSpace can reveal that Goodrich was a member of the Facebook group ‘Jewish Defence Forces’ (JDF) whose description, pinned at the top of the page, engages in a series of racist smears against the Palestinian people, including that they do not exist and have no national claim.

Goodrich was convener of Cofis until 9 October 2018, according to the organisation. His history in rightwing pro-Israel circles in Scotland goes back several years, and he has represented the movement repeatedly in media interviews over that time.

Cofis is the umbrella group coordinating a range of pro-Israel groups around the country, a key part of Goodrich’s efforts in recent years.

Cofis describes its role as to “resource and coordinate a growing number of groups around Scotland who are seeking to stand by the nation of Israel in the midst of pressures, boycotts and undeserved criticism.”

The Jewish Defence Forces Facebook group’s first ‘rule’ for membership states: “‘This group is about “Palestine and Palestinians” which doesn’t [sic] exist. Israel is the name of our country.'” 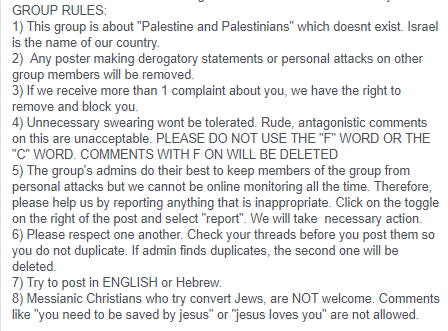 CommonSpace has seen evidence that Goodrich was an active member of the group, posting in support of the “honour” of the Israeli Defence Forces. 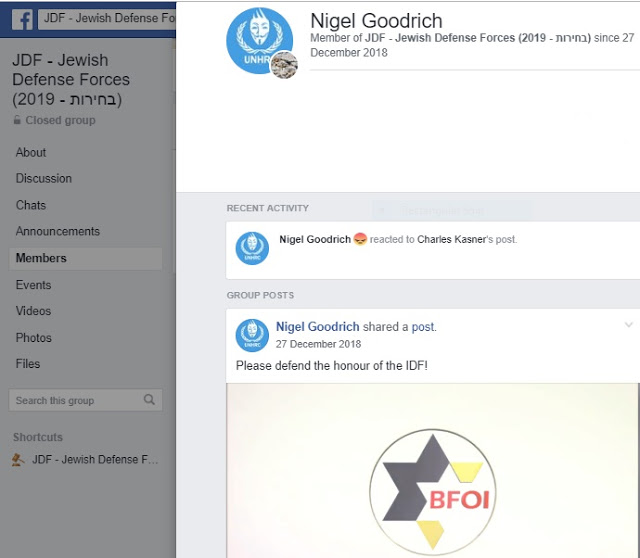 Stein was adamant that Goodrich no longer had anything to do with Cofis or GFI, and was not in contact.

“He isn’t invited, he doesn’t attend, he isn’t in this country. He’s got nothing to do with those events,” he said.

“I don’t believe he will be involved in anything we do.”

When asked if it was worrying that the person who had led the organisation until so recently had joined a Facebook page who’s rules were based on such ideas, Stein said: “It sounds to me like he has changed, maybe that’s one of the reasons he has gone.”

Stein insisted that the groups he was involved in were “anti-racist” and that “we believe in a two state solution”.

He insisted that he “did not have a view” about whether the Facebook page was racist, as he had only just come across it through screenshots sent to him by CommonSpace.

READ MORE: Talat Ahmed: Views on Israel should not be the dividing line in Scotland’s anti-racism movement

“I have to be very careful and check the things that you are pointing to. But that’s only partially something he said, he may have other views I don’t know.”

The current Cofis acting convener Edward Sutherland also commented, appearing to assert that Goodrich himself was not a racist.

Sutherland said: “Nigel Goodrich resigned as Convenor of Cofis on 9 October 2018, due to relocating outside of the UK. He now has no involvement with Cofis. We are an organisation which advocates for peaceful coexistence between Israel and Palestinians and we reject all forms of racism, including antisemitism as defined in the IHRA definition.

“Until yesterday, I was unaware of the existence of the Facebook group you refer to, but note from the screenshot that Nigel did not join until after he left Cofis. I have seen no evidence that Nigel has personally made any racist comment and would be astonished to do so [sic].”

Other active members of the JDF Facebook group include Paul Besser, ’intelligence officer’ of the far-right group Britain First which has been banned from Facebook and Twitter, and Mordechai Kedar, an Israeli academic and director of Stop Islamisation of Nations, which infamous far-right figure Stephen Yaxley-Lennon (aka ‘Tommy Robinson’) addressed a conference of alongside Kedar in 2012. 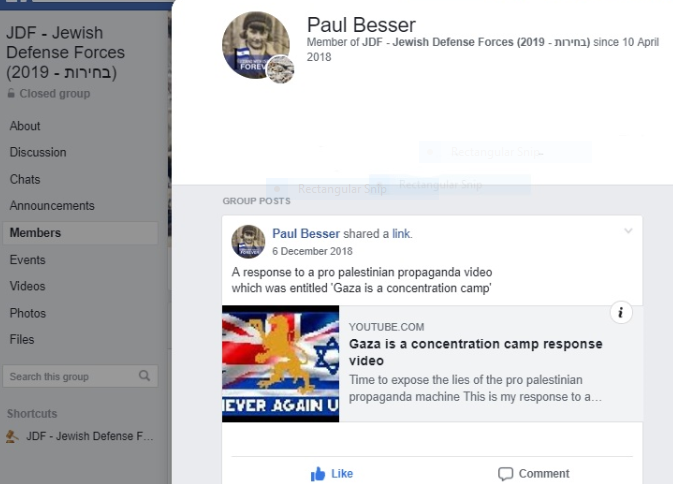 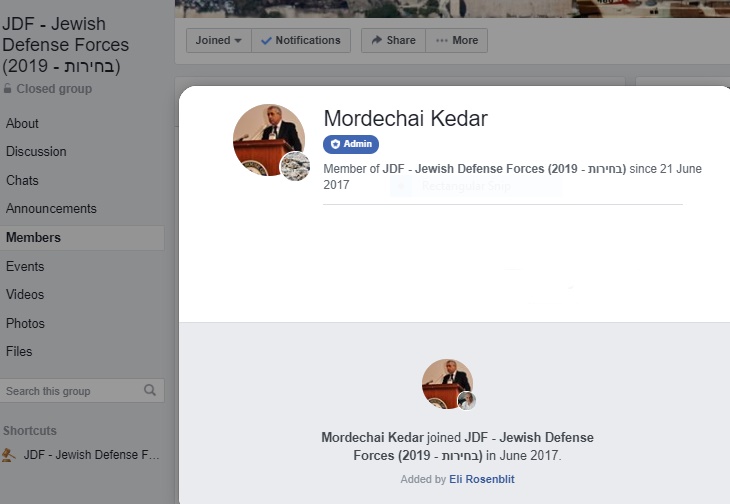 Asked if Sutherland rejected the racism of the Facebook page itself, he said: “I absolutely condemn all racism and reject the idea that the Palestinian people do not exist. There will only be peace when all sides are able to feel that they are getting a fair deal, and that is what Cofis supports.”

CommonSpace was unable to reach Goodrich to request comment.

The news that Cofis has distanced itself from one of its most important organisers in recent years comes as the organisation is involved in a controversy around an annual anti-racism march in Glasgow.

Cofis and GFI are expected to attend the annual Stand-Up to Racism demonstration (16 March), creating a row between march organisers and pro-Palestinian groups who believe pro-Israel organisations promote the politics of a racist state.

Writing on CommonSpace earlier in the week, Mick Napier from Scottish Palestine Solidarity Campaign argued that COFIS’ anticipated participation was a “surreal situation” because the group “justify and defend a regime that kills and dispossesses people because they are Palestinians”.

Responding, Talet Ahmed from Stand Up to Racism Scotland wrote that they had not invited COFIS to participate, but that it would be wrong to ban them from the demonstration because “the issue of Palestine” is not “the defining criteria” for participation in the anti-racist movement.

Sarah Glynn from Scottish Jews Against Zionism said Goodrich’s membership of the page was “unsurprising” and that “any attempt to distance Cofis from this can’t rid them of the Zionist racism that motivates their existence”.

The idea that the Palestinians are not a real people is a common racist trope on the Israeli right and far right, which has grown as a force before upcoming elections in Israel in April.

Racist rhetoric from Israeli leaders has increased in recent months following the passing of so called ‘nation state laws’, which expressly privileged Jewish citizens and deny equal status to Arab’s living in the Israeli state.

On 14-15 March around 100 sites in Gaza were attacked in Israeli airstrikes on the eve of the elections.