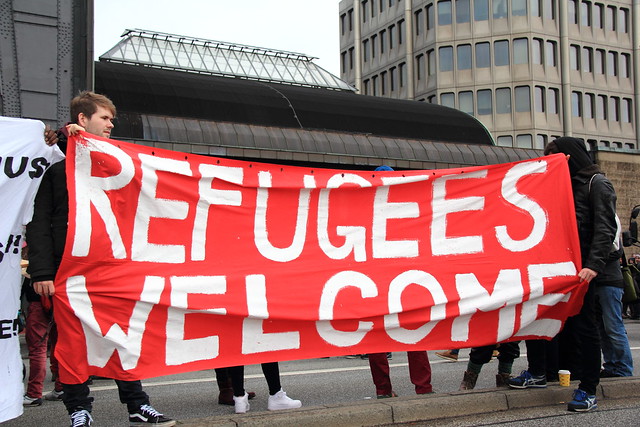 Serco have come under fire after sending “the wrong letter” to an asylum seeker awaiting the result of their claim.

SERCO has apologised after a resident received an eviction letter which made false claims about their asylum status, CommonSpace can reveal.

The letter, which stated that the anonymous asylum seeker’s application had been successful, has been rescinded after a legal intervention.

The resident’s claim had not in fact been processed, despite the letter stating so. It went on to say that as the person had been given leave to remain they were no longer eligible for Home Office support, and would have to make a homeless application to secure temporary accommodation. The resident sought legal advice about the eviction notice, which resulted in the letter being rescinded.

The letter stated: “The end of your Home Office support also applies to the accommodation provided to you at the above property. We must therefore give you notice that any right you had to occupy the above property under the Occupancy Agreement is also terminated. It will terminate on 25 June 2019. Therefore you will need to take steps to leave the property no later than this date.” 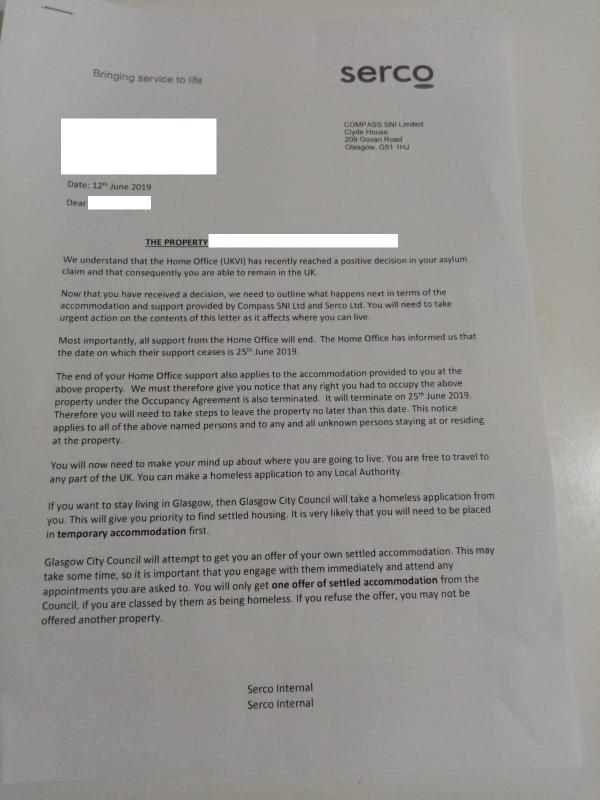 The revelation comes after Serco announced they were relaunching lock changes to evict 300 asylum seekers. The action had been stalled by a legal challenge last year, but this was dismissed in court.

Living Rent Glasgow, which shared the letter, claimed that Serco is “illegally trying to make people homeless”, adding: “These are the scare tactics that Serco is using against asylum seekers to create a hostile environment. A multinational company with a long history of malpractice and abuse is profiting off of making people homeless.”

Jenni Halliday, Serco COMPASS Contract Director, told CommonSpace: ”We are very sorry for this mistake that meant that the wrong letter was sent to this person. It should not have happened and we have apologised to them and sent the correct letter. We have put in place extra measures to make sure it does not happen again.”

Chris Stephens, SNP MP for Glasgow South-West, told CommonSpace that he believed Serco have been “less than honest” in their claim that they are not evicting asylum seekers until their appeal has determined whether they have leave to remain or not. Following a meeting with the Immigration Minister Caroline Nokes, Stephens said he was concerned that asylum seekers who have been given the right to remain will be sent similar letters, which give an extremely short eviction notice with little time to secure alternative accommodation.

Serco claimed in its statement two weeks ago confirming that the programme of lock changes was re-starting that the vast majority of the 300 evictions were cases where asylum appeals had been “exhausted”, a charge that was rejected by by Robina Qureshi, director of Positive Action in Housing, who said “out of 1600 people who were destitute, 92 per cent were working to address their legal position. Very few were appeal rights exhausted.” Stephens stated that some of his constituents have also been served evictions notices before their right to appeal has been exhausted.

“I think it’s clear that Serco are not following Home Office guidance,” he added.

The resident arrived home to find the letter on their bed. The charity Asylum Seeker Housing Project has previously reported that Serco workers regularly enter residents’ homes using spare keys with no prior notice.

Peer research published in April found that most of the 44 residents who took part in the study believed that Serco and their contractors had used spare keys to enter their homes.

Serco said that they did not accept the findings of the report, claiming that dates of the next routine property check were listed on a board in properties and that a one week notice letter was send before compliance visits.

Charities have warned that the eviction of 300 asylum seekers in Glasgow could lead to “mass destitution” in the city.