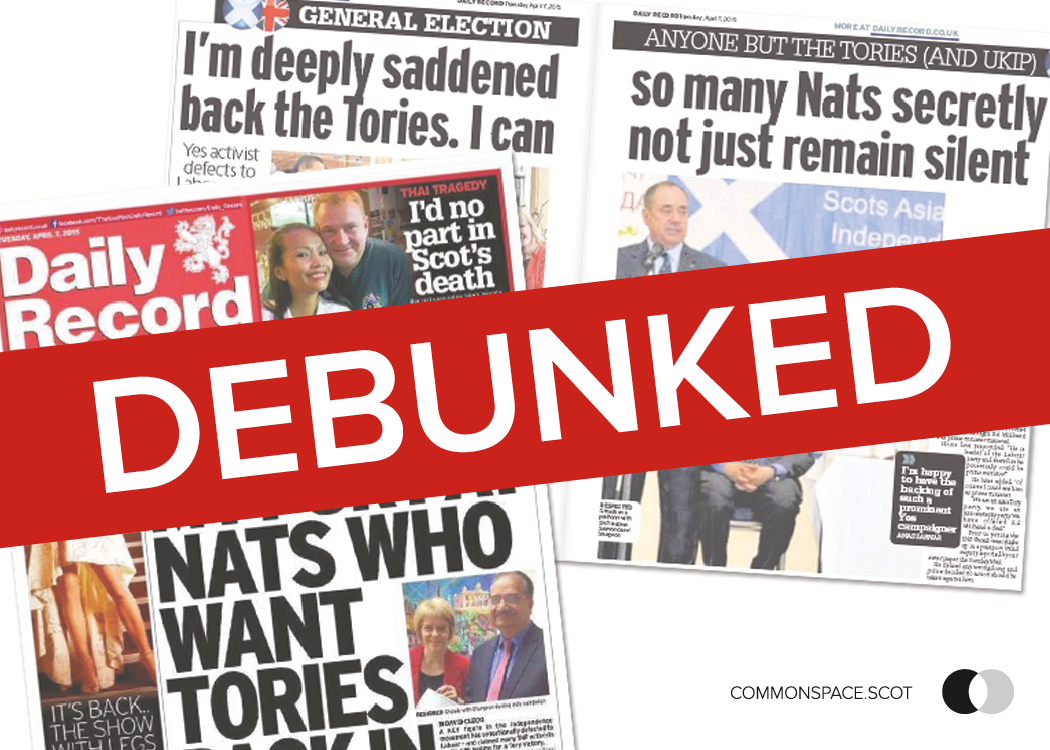 A YES campaigner who was reported as “defecting” to the Labour party by the Daily Record in a much-hyped front page splash has said he in fact remains a member of the SNP, a supporter of independence and favourable to a Labour-SNP deal at Westminster.

On Tuesday, the Daily Record ran a front-page story (click here to read) claiming that Nicola Sturgeon had suffered a “major setback” after activist Muhammad Shoaib was said to have joined the Labour party.

Hyping the story up, the tabloid title branded Shoaib an ‘SNP boss’, although it is unclear why. Shoaib is a former Labour councillor and organiser of Scots Asians for Independence. He joined the SNP in 2007.

However, Shoaib has told CommonSpace that while he does want to see a Labour government ahead of the Tories – he would like to see Labour and the SNP work together in a “loose” arrangement following May’s vote.

“Basically, I’ve not joined Labour and I’m still officially a member of the SNP,” said Shoaib.

Shoaib claimed that he has been under significant “community pressure” and that his position has not changed from 2010 when he also said he would like to see a Labour government at Westminster.

“I’ve been under a lot of community pressure to come out and say that I support a Labour government. But in 2010 election, I went on BBC and was asked which party do you support in England and my answer was same as I gave to the Daily Record yesterday.”

When asked what his prefered outcome would be for the 7 May election, Shoaib said that one party would in government would create more “stability”.

However, he stated that he was favourable towards a Labour-SNP post-election pact.

Shaoib said: “Obviously it is one of my wishes that both parties should work together in some sort of loose arrangement.

“Both parties have made it clear they don’t want a coalition, but they can decide on vote by vote basis.

“They could give a more positive government to give our children a better future.”

However, when speaking to CommonSpace, Shoaib failed to confirm this. Instead, he raised concerns that
implicit SNP support for the Green party in England would help the Tories.

Shoaib, who has previously been a Labour councillor, put his name forward as an SNP candidate for Westminster earlier this year but lost out in a selection battle to Alison Thewliss.

In December 2014, Shoaib had been critical of Scottish Labour leader Jim Murphy, commenting that he is a “no go area” for Muslims.

He was quoted in the Herald at the time as saying: “Jim Murphy – his past is basically supporting an illegal war in Iraq. He never came out and condemned the Gaza bombings. From a Muslim perspective, those were unforgivable.”

When CommonSpace asked Shoaib if he felt Murphy was the right man to lead Scottish Labour, he said: “I’m not a member of the Labour party so I can’t comment on that.”

Shaoib, who is an organiser of Scots Asians for Independence, insisted that he remains a committed supporter of Scottish independence.

“I still hold independence close to my heart. I will still work for Yes whenever the opportunity arises,” he told CommonSpace.

According to opinion polls, the SNP is set to significantly increase its seats at the forthcoming election and with a hung parliament likely, Labour may be relient on its support in order to form a government.