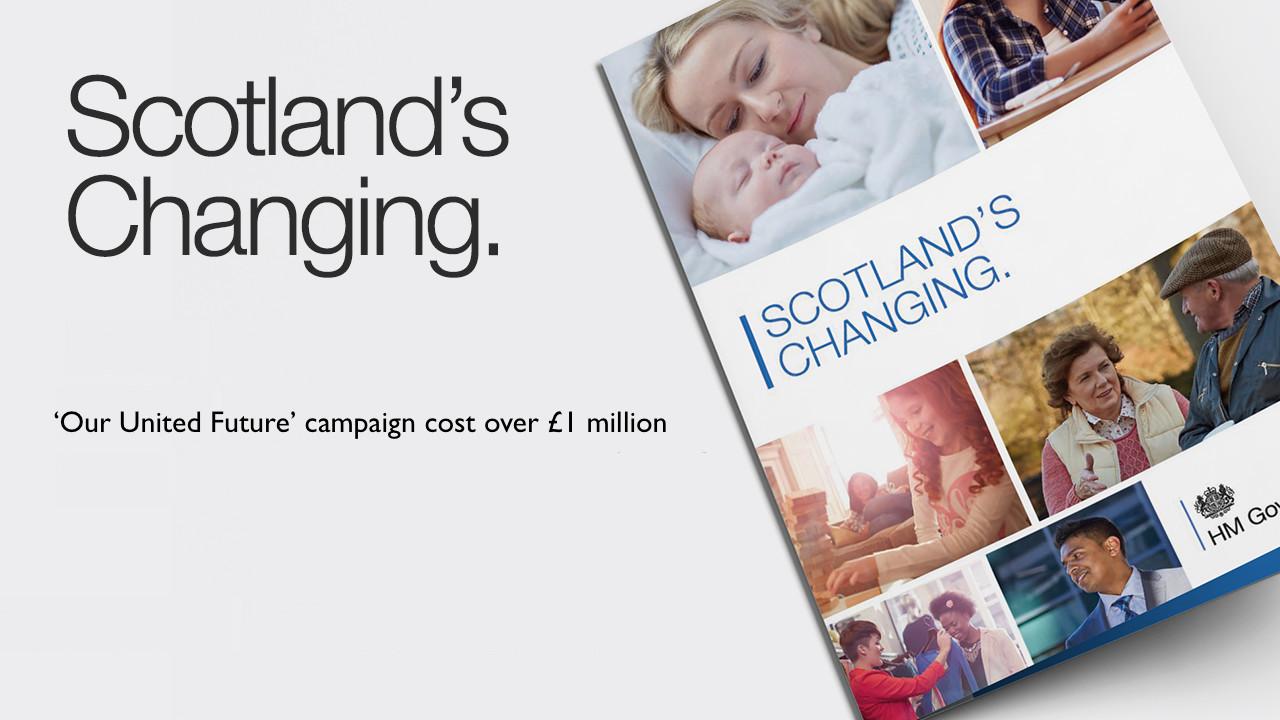 A PRE-ELECTION information blitz to promote devolution and the UK Government cost over a million pounds, according to figures given to CommonSpace under freedom of information legislation.

The ‘Our United Future’ campaign, orchestrated by government departments in Whitehall, claimed the Smith Commission created “A united future. Built to last.”

Spending on the campaign included “a doordrop [leaflet] to every household in Scotland and local print and radio advertising”.

The campaign was described as “government propaganda” by pro-independence supporters as the pro-union campaign came just months before May’s crucial General Election vote.

Tony Conte of the Scotland office told CommonSpace: “The final costs came to PS936, 560 (excluding VAT) and this includes some monitoring costs. The public information campaign has been overseen by the cabinet office campaigns team and has been paid for from cabinet office funds.”

Including VAT, the cost of the campaign was over PS1m. Spending also included the design of a “fun quiz” and a social media ‘tumblr’ page.

Scottish National Party campaign leader Angus Robertson MP said: “This pre-election spending was blatant electioneering by the Tories and the No campaign parties and these figures make clear just how much taxpayer money has been misused.

“The polls we have consistently seen since this publicity campaign have shown that people in Scotland have not been fooled in the slightest by the Scotland Office’s bogus claims on the Vow.”

The information campaign was scheduled a month before the ‘purdah’ period, the formal pre-election timescale when civil servants cannot support campaigns or political announcements.

Alongside the campaign, UK cabinet minister Danny Alexander announced plans to cover infrastructure projects in Scotland with union flags to illustrate the influence of the UK Government in Scotland.

This was satirised online, with images of Trident nuclear weapons, the monarchy and the House of Lords emblazoned with ‘funded by the UK Government’ and union flags.

(Listen from 5:40 to hear Stephen Paton’s take on the campaign)

During the independence referendum the UK Government spent hundreds of thousands of pounds on internal polling relating to Scottish independence, which was never released.

Civil servants at the UK Treasury were criticised for taking the side of the Conservative chancellor over any currency arrangement with an independent Scotland.

Picture courtesy of Our United Future