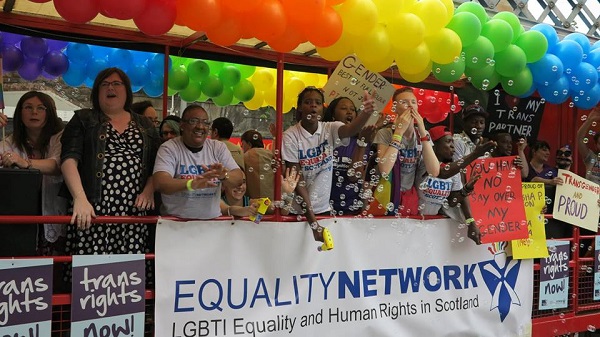 THE Equality Network and Scottish Trans Alliance are urging the Scottish Parliament to make three key changes to the Gender Recognition Act (2004) to support trans people in Scotland.

The campaign was launched in 2014 by Scottish Trans Alliance, which is the Equality Network project to promote equality and inclusion based on gender identity and gender reassignment.

Working in collaboration with LGBT Youth Scotland, NUS Scotland, Stonewall Scotland and Pink Saltire, Scottish Trans Alliance has consulted with a diverse group of trans people to develop ideas for how the law could be changed to benefit all trans people who want to gain legal recognition of their gender identity.

The campaign has gained the support of the Children and Young People’s Commissioner, a range of third sector organisations, including feminist organisations and the violence against women sector. Campaigners continue to meet with MSPs to build cross-party support for the legal reforms.

CommonSpace takes a look at what the campaign is asking for and what the law around rights and recognition for trans people looks like in Scotland.

What legal rights do trans people currently have in Scotland?

A number of legal changes have taken place in recent years across the UK and in Scotland which have advanced the rights of trans people, whose gender identity is different to the one they were assigned at birth.

Scotland led the way by including transgender hate crime in the Offences (Aggravation by Prejudice) (Scotland) Act of 2009. A year later, the UK-wide Equality Act put in place protections against discrimination based on gender reassignment.

When same-sex marriage was introduced in Scotland in 2014, the law was hailed as being more trans inclusive than the law in England and Wales, because it does not require trans people to gain the consent of their spouse in order to legally change their gender.

Scotland led the way by including transgender hate crime in the Offences (Aggravation by Prejudice) (Scotland) Act of 2009. A year later, the UK-wide Equality Act put in place protections against discrimination based on gender reassignment.

Back in 2004, the Gender Recognition Act (the focus of the Equal Recognition Campaign) was introduced at Westminster and passed by a legislative consent motion in the Scottish Parliament. At the time, this legislation was progressive as it allowed trans people to change their birth certificates to reflect their gender identity for the first time. Prior to this, gender could only be changed on passports and other records considered as ‘current’.

Since the law changed, people who have been living for a minimum of two years in their ‘acquired gender’ can now be issued a new birth certificate by presenting evidence to a gender recognition panel. This must include a detailed psychiatric report confirming diagnosis of gender dysphoria.

Only those aged 18 and over can access this process, although people of any age can have the gender on their medical records and passports changed with the consent of their parents or guardians.

Birth certificates, as with passports and many other official documents, can only indicate gender as male or female, meaning there is no option for recognition of people who don’t identify as either men or women.

How does this compare to other countries?

Scotland has been recognised as a leader on LGBT equality — for example, if Scotland was ranked as a country separate to the UK, it would have been top of the International Lesbian, Gay, Bisexual, Trans and Intersex Association (ILGA)-Europe Rainbow Index in 2015 and 2016.

That being said, the Parliamentary Assembly of the Council of Europe agreed a resolution in 2015 on discrimination against transgender people, which includes clauses on gender recognition which are not met by existing law in Scotland.

Specifically, the resolution states that governments should “develop quick, transparent and accessible procedures, based on self-determination, for changing the name and registered sex of transgender people on birth certificates, identity cards, passports, educational certificates and other similar documents; make these procedures available for all people who seek to use them, irrespective of age”.

Malta is one of the first countries in the world to legally recognise non-binary people on birth certificates, alongside a small number of states in the United States and Australia.

There are now a number of countries which have introduced this kind of process, including Ireland, Denmark, Malta, Argentina and Columbia. Malta, which was ranked first in last year’s ILGA-Europe Rainbow Index, passed a law in 2015 which allows people to legally change their gender through self-declaration, with a prohibition on requests for medical information, and a 30-day time limit for completion of the process.

Malta has also become one of the first countries in the world to legally recognise non-binary people on birth certificates, alongside a small number of states in the United States and Australia.

A number of countries including Australia, New Zealand, Denmark, Nepal, India, Bangladesh, and Pakistan allow non-binary genders to be recognised on other official documents such as passports and voter registration cards.

What changes are being proposed?

The Equal Recognition Campaign is calling for the Scottish Parliament to reform the Gender Recognition Act, as birth certificates are a devolved issue. The three campaign calls are to:

1.)  Remove the psychiatric diagnosis requirement and introduce a simple administrative process of self-declaration in order for people to have the gender on their birth certificate changed.

2.) Reduce the age at which people can have the gender on their birth certificate changed from 18 to 16, and allow those under 16 to do so with their parents’ or guardians’ consent.

3.) Introduce recognition on birth certificates of non-binary gender, for people who don’t identify as men or women.

Vic Valentine, policy officer at Scottish Trans Alliance, explains the organisation’s position: “We believe that it is unacceptable for Scotland, a country that has been proud to be top of the ILGA-Europe Rainbow Index for the last two years, to continue to have gender recognition laws that are so far behind international best practice.

“We’ll be making the case that there is a clear human rights argument for reforming this legislation, and that Scotland has some work to do to catch up with many other countries around the world on fully recognising its trans citizens.”

Why do campaigners see this as an important issue?

This short film by trans activist Kate Adair for Pink Saltire explains the proposed legal changes and why they’re important to trans people.

Proponents of trans people’s rights point to the importance of people being able to change the gender on their birth certificates as a means of providing official, unambiguous legal recognition of their gender identity. There are situations where people are required to provide their birth certificates, which could interfere with a trans person’s right to privacy if the document reflects the gender they were assigned at birth.

This view was legally supported in a ruling by the European Court of Human Rights in 2002 in a case against the United Kingdom, which led to the introduction of the Gender Recognition Act. However, the requirement to gain a psychiatric diagnosis is now regarded as unnecessarily intrusive and as placing psychiatrists in the inappropriate role of gatekeepers to legal recognition.

The minimum age of 18 is also regarded as inappropriate given that 16 year olds are legally treated as adults in other contexts. The bar on legal recognition is seen as creating unnecessary problems for trans young people who are already living in the gender with which they identify.

The lack of recognition of a non-binary identity means that people who don’t identify solely as men or women frequently face situations where they have to choose a gender option which doesn’t reflect their identity, and their privacy around this is not protected.

Research by Scottish Trans Alliance in 2012 found that around a third of trans respondents did not identify constantly and clearly as a man or a woman, so this issue is thought to affect a significant portion of trans people. (This is different to being intersex, which is about a person’s body rather than their identity).

What do the political parties say?

The principles of the Equal Recognition Campaign have so far received broad support.

The SNP website states its commitment to “review and reform gender recognition law, so it’s in line with international best practice for people who are transgender or intersex”.

The Scottish Government has further stated that it is “giving careful consideration to the issues raised as part of the Equal Recognition Campaign”, noting that “any changes to the Gender Recognition Act 2004 would require both primary legislation and full consultation beforehand”.

Each of the other elected parties made reference to reforming the Gender Recognition Act in their 2016 manifestos.

The Scottish Conservatives stated under “law reform” that “other areas that we believe require review are family law as well as the Gender Recognition Act”.

The Scottish Greens said: “We will back the campaign to reform gender recognition law in line with international best practice.”

Scottish Labour stated that it would seek to “change the law to provide legal recognition for people who do not identify as men or women and remove the psychiatric diagnosis requirement from legal gender recognition process”, adding: “Scotland’s young people who wish to seek legal recognition of the gender they live would be entitled to do so from the age of 16.”

The Scottish Liberal Democrats said they would “reform the Gender Recognition Act to bring it into line with international good practice in recognising the gender identity of trans people, including consideration of the medical requirements placed on applicants, and recognise the gender identity of non-binary people”.

You can find out more about Equal Recognition at the campaign website.