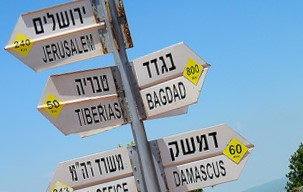 This week’s hostilities in the occupied Golan Heights have prompted international fears of escalation; what is the background to the controversial territory?

ON THE MORNING of 10 May, the Israel Defence Forces (IDF) alleged that 20 rockets had been fired at Israeli military posts in the occupied Golan Heights region of south-western Syria, a claim denied by Iran

The alleged assault prompted almost immediate retaliation by Israel, which reported that 70 Iranian military targets inside of Syria had been struck by Israeli forces, including posts and munitions dumps within the Golan Heights’ ‘demilitarised zone’.

The call from Russia, Germany and France for Iran, Syria and Israel to exercise restraint reflects the occupied Golan Heights’ status as a perpetually controversial focal point for decades-long ideological and military conflict.

Throughout history, the Golan Heights has often acted as a bridge between the capitals and power-blocs of the Arab world – in antiquity, between Mesopotamia and the Mediterranean, and later between Damascus and Cairo. It has also historically been a place of settlement and refuge for the Druze Muslims, who can trace their settlement in the Golan Heights to the tenth century.

ANALYSIS: After Belhaj apology and the Trump Iran pull-out, will the UK go on being America’s great British poodle?

However, during the reign of the Ottoman Empire, the Golan Heights became thoroughly depopulated, and would only return to its pivotal role in the early 20th century. While the emerging Pan-Arabic movement advocated that the Golan Heights be included in the re-establishment of Greater Syria, the Golan Heights instead fell under the purview of the European colonial powers.

Despite British pressure for the region to be included in British Mandatory Palestine following the First World War, the Golan Heights was instead placed under French administration until 1944. However, when Syria achieved its independence in 1945, following failed efforts by the French to maintain its colonial authority by military means, the Golan Heights – a mere 30km from the Syrian capital – became part of the newly sovereign state.

In the aftermath of the 1948-49 Arab-Israeli War, during which the Syrian army obstructed Israeli military efforts, the Golan Heights were partly demilitarised under an armistice agreement between Israel and Syria. The demilitarized zone was largely under Syrian jurisdiction, and yet saw thousands of violent incidents over the next few years; although Syria contended that it nor Israel had sovereignty over the zone, Israel maintained that it had both legal and political rights to the territory, under the pretext that it was inside the borders of Mandatory Palestine, and was allocated the area to Israel.

The Golan Heights remain a powerful symbol for Syria, Palestine and Israel – of both their national defiance and their geopolitical aspirations.

During the Yom-Kippur War of 1973, the Golan Heights were temporarily re-taken by the Syrian army, until a unilaterial accord between Israel and Egypt, overseen by then-US Secretary of State Henry Kissinger, allowed Israel to mobilise its military in order to reoccupy the Golan. A new agreement in 1974 returned a small percentage of the region occupied in 1967, in exchange for a more permanent ceasefire.

In 1981, Israel passed the Golan Heights Law, which officially extended Israeli “laws, jurisdiction and administration” into the Golan Heights and solidified Israeli annexation of the occupied territory. However, neither the law nor Israel’s claim to the territory has ever been recognised internationally, and the United Nations almost immediately passed UN Security Council Resolution 497, which stated that the Israeli Government’s “decision to impose its laws, jurisdiction and administration in the occupied Syrian Golan Heights was nul and void and without any international legal effect.”

The issue was reopened during American-brokered peace negotiations in 1999-2000, with little significant progress, although in 2007, it was reported that Israel was considering surrendering the Golan Heights if the government of Bashar Assad would sever all links with Iran and Iranian-linked groups, and sign up for a comprehensive peace agreement. However, negotiations broke down following the outbreak of the Gaza War, with Syria protesting Israeli military actions.

The Syrian civil war further complicated matters, with the Syrian-controlled area of the Golan Heights DMZ becoming a frequent battleground between the Syrian military, various Syrian rebel factions, Islamist groups and ISIS-affiliated militants. In 2016, Israeli Prime Minister Benjamin Netanyahu attracted further UN condemnation when he claimed that the occupied Golan Heights would “forever” remain under Israeli control. Nevertheless, the Golan Heights remain a powerful symbol for Syria, Palestine and Israel – of both their national defiance and their geopolitical aspirations.