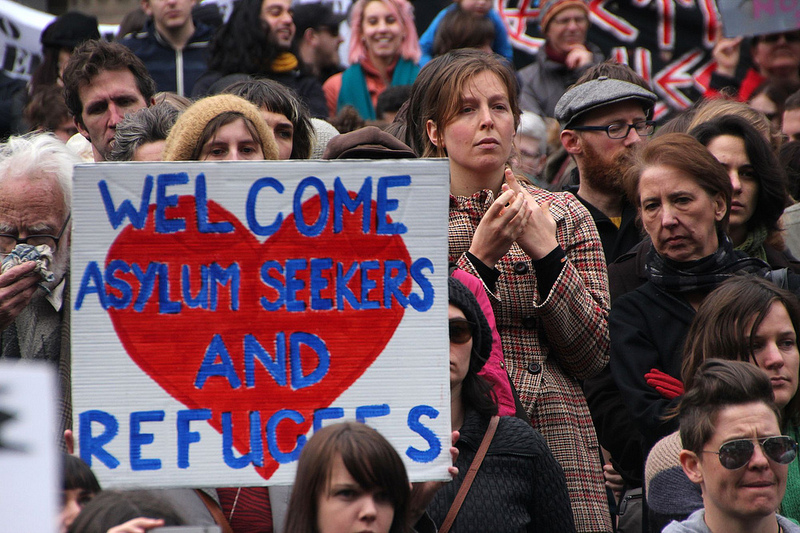 All political parties other than the Tories have expressed their opposition to Serco’s actions, but say their hands are tied in terms of offering a solution and preventing a humanitarian crisis. How has this situation come about, and what could be done about it? CommonSpace takes a look.

What is Serco anyway?

You might not be aware of the company, but most people will have interacted with Serco at some point.

“A leading provider of public services”, the outsourcing giant Serco receives public contracts totalling in the billions to carry out services on behalf of the government in a similar way to how the now-defunct Carillion managed private finance projects.

The company boasts that it operates across a number of public services, such as operating prisons on behalf of the criminal justice system and providing security and prisoner transport for courts.

Serco also provides privatised functions in Scottish hospitals, “working in partnership” with the NHS to deliver “managed services” such as facilities management.

Read More: Explainer: What you need to know about Carillion

So what have they got to do with asylum seekers in Glasgow?

Serco operates extensively in Scotland, including Glasgow where it houses asylum seekers on behalf of the Home Office.

Why are Serco doing this now? And why in Glasgow?

It’s not clear what specifically has prompted this action now, but some speculate Serco are taking advantage of both the Scottish and UK Parliaments being in recess, a political vacuum they are seeking to exploit.

Glasgow is home to more asylum seekers than any other local authority in the UK. Serco has not been clear whether this is now their policy for all over the UK, but certainly Glasgow appears to be a test case for the mass eviction of asylum seekers.

This is complicated. Kicking people out of their home with just one week’s notice and without a court summons is generally not legal, but since asylum seekers are not citizens of the UK the law is murky.

Fiona McPhail, principal solicitor at Shelter Scotland, has said “anybody in this situation of having notice or anticipating notice should get urgent legal advice as it is not clear cut that Serco can merely change the lock.” Sally Thomas of Scottish Federation of Housing Associations say it is not “in the spirit of the law”. Serco say it is legal, but for those asylum seekers who are going to be left destitute, a lengthy legal case will be little comfort.

Why has it been described as a humanitarian crisis?

Strict Tory immigration rules, which form part of the Conservative’ hostile environment policy, mean those at risk of eviction fall into a category of asylum seeker who has “no recourse to public funds”.

This means that the council, and even the Scottish Government, are restricted from intervening in any way. That restriction would include even basic measures such as emergency shelter or access to social work services.

This “perfect storm” of Serco’s shock move and the restrictions have led to council officials warning that Glasgow is on the verge of a humanitarian crisis with hundreds of people potentially forced onto the streets.

With nowhere to go and the usual support systems paralysed, only charity and third sector groups can provide emergency support, something they say they will be unable to do for the number of people affected.

What can we do to help?

Activists and politicians across Glasgow are beginning to organise ways to get involved, including a protest in Glasgow on Tuesday [31 July] evening.

Others, including SNP MSP Sandra White, Labour MP Paul Sweeney and tenants’ union Living Rent, have said that direct action could be used to physically prevent the evictions from going ahead.